Can Aytekin is not home: Arter opens 'Empty House' 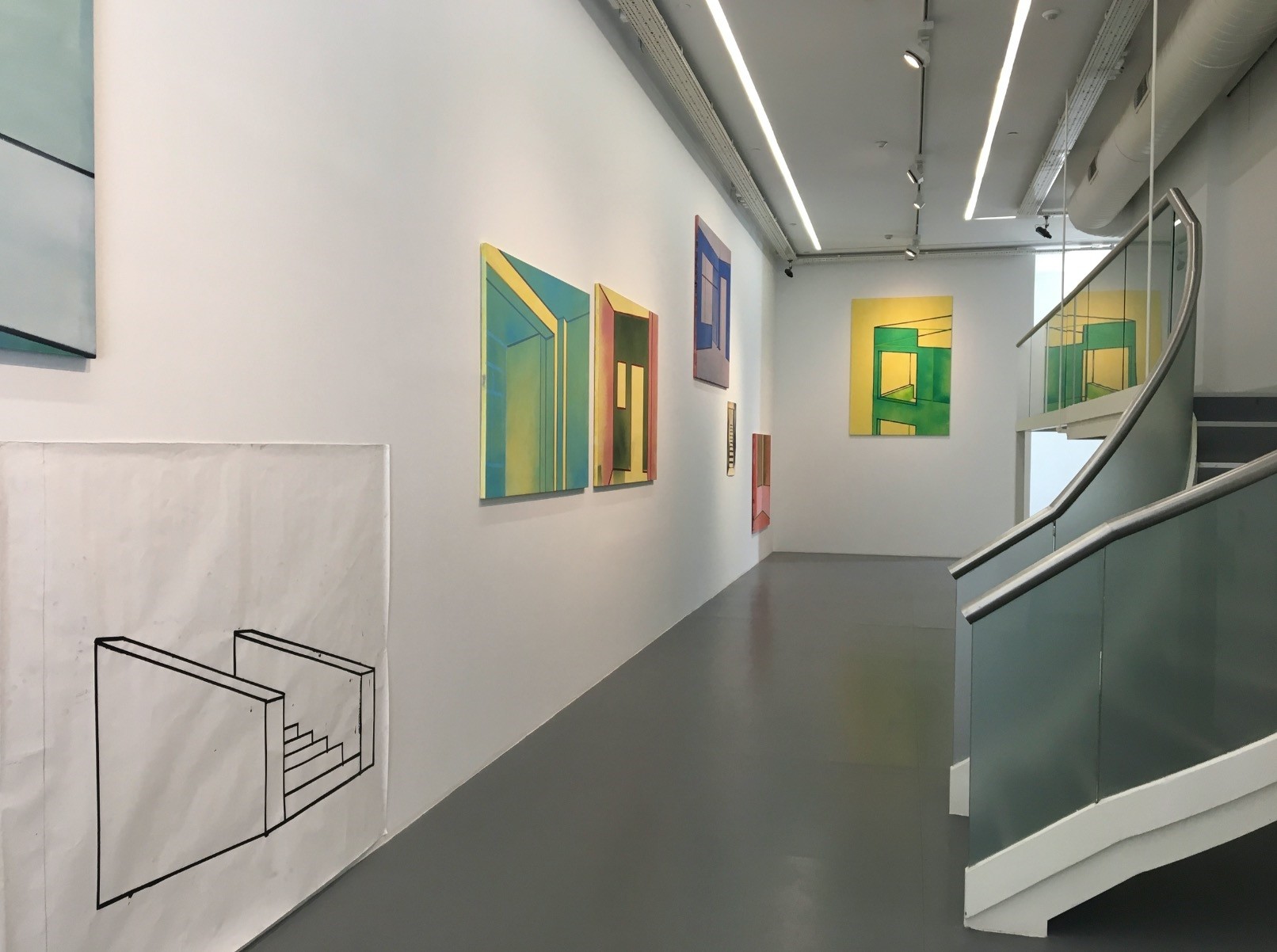 Arter curator Eda Berkmen transformed the ground floor of the u0130stiklal Avenue gallery for its first painting show in close collaboration with the artist.
by Matt Hanson Apr 06, 2018 12:00 am

The curator Eda Berkmen is an eloquent thinker, rightfully delighted to work at Arter, one of Istanbul's leading arts institutions, currently housed in a vibrant, 19th century historical residence along İstiklal Avenue, where the extravagant Levantine and Greek tenements of old stand pockmarked by the trials of inner-city preservation and the commercial trends of the day. For six months before the March 16 opening of "Empty House," she initiated the exhibition simply by suggesting Can Aytekin at a gallery meeting as staff prepared for the coming season, surrounded by the distinguished airs and unparalleled financial stability of enduring support from the Vehbi Koç Foundation. Its storefront window is polished to a sheen (despite the construction and litter of Istanbul's infamous pollution), lacquered with exhibition titles in fonts stylized to distinguish new shows. Inside, card-carrying assistants stand ready behind rotating security guards and a spiraling, marble staircase.

Berkmen has an unmistakable elan, clothed in a refined blend of formality and freedom. Her eye is steeped in the strength of originality that ages well. Lately, she is known for her work curating Nil Yalter, the Paris-based Turkish feminist born in Cairo, Egypt in 1938 to a life of contemporary art-making in critical videography, photographic installation, canvas painting and interactive media. During the recent winter months, she visited Aytekin at his studio in Ortaköy, where he also worked as a student in its popular secondhand bookseller's row by the touristic shorefront mosque. It is the setting for his "Ortaköy Bookstore" (2011), a sculptural wall ornament on the steps between the ground floor's "Empty House" series (2011 to 2018), and the first floor displaying five series from his earlier works, beginning with the "Temple Paintings" (2003-2004) of his earliest venture as an exhibiting artist. "Ortaköy Bookstore" details the unique architectural feature of the literary shops that open and close with all of the fairytale fascination of a traveling circus as it packs up and unloads as in a dimension separate from the status quo. 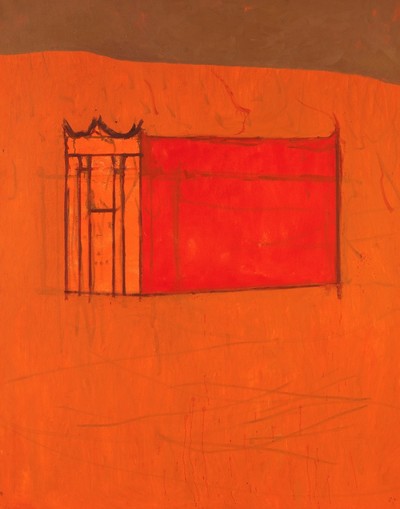 From his early Temple Paintings (2003-2004) series, Aytekin's first piece, "Temple I" (2003), explores the lines and forms of architectural emptiness through color in an oil on canvas.

Aytekin captures the otherness of the seemingly plain. His architectural lines, gleaned from his days under the wing of the eminent Turkish minimalist abstractionist Adnan Çoker at Mimar Sinan Fine Arts University, point to the emptiness of home. In his conceptual rendering of domestic space, he paints and crafts his works with the raw emotion of a man bound to his private sphere, searching for a slit of daylight in the dusty curtain, a crack of creative logic in a stone, a foundation. For one of his past works, from the "Rock Paintings" series (2005-2006), he sketched a rock for a-year-and-a-half straight, every day. He committed its every nuance to memory. He chose a boulder near a former quarry behind his grandfather's house in İstinye, a northern district of Istanbul toward the Black Sea. Its effect is that of a prehistoric cave drawing, only excavated from his exacting diligence, his tireless discipline as an artist who has focused on his art foremost. For one of his academic distinction, born in 1970 in Istanbul, his relatively few five previous solo exhibitions are a testament to the power and magnetism of his inner practice as a visionary who paints emptiness from interiors of the apparently mundane, from the core of the yawning cradle where at least a third of life (for those lucky enough to have a place) is dreamed. Tom Waits sang it best: "If there's love in a house it's a palace for sure. Without love, it ain't nothing but a house, a house where nobody lives."

The Revisions of Arter

"Home is, of course, a way to think about space, and how your imagination works, not in the sense of dreaming, but more so in terms of having to start visualizing, or formalizing ideas, because it always needs a space. The home is the first space. That is one of the reasons Aytekin went back home. For all of his projects, he works more like a researcher. First he starts finding clippings, paintings from art history. He looks at a list of poems, etymology of names, and he makes research folders that are very well organized, which is surprising for an artist," Berkmen said with a friendly chuckle in front of his wooden "Empty House" (2018) model also exhibited in an earlier form at MARSIstanbul. "His research in three dimensions is first through sketchbooks like any painter, and then through models. Even for the older series on the first floor there are models that you will not see. I have a lot of documentation for them. If he's working on his 'Temple Paintings,' he builds archetypal temples from found objects. Because that series was about the temple burning, he actually lit them on fire and observed them. Before he paints, part of his practice is to feel and see proportions. His whole practice is based on seeing. He is well aware that sight cannot be thought of as different from the body. The eyes are actually tactile. They more evolved organs of the skin."

Aytekin is a professor at Mimar Sinan's printmaking studio, which he runs. The aesthetics of his chosen pedagogy are especially clear in the "Inverse" series (2016), woodcuts on paper that deliver a central contrast through primary red with its additive for light, green. They merge and mesh over Tetris-like, rectangular experiments, exploring the geometry of shade and shadow in the two dimensions that he untangles through the illusion of empty space with puzzling ingenuity. Interestingly, it is that quality of emptiness that he returns to as more literary minds would consider the idea of negative capability, to see artistic potential in opposites, uncertainties, mysteries. 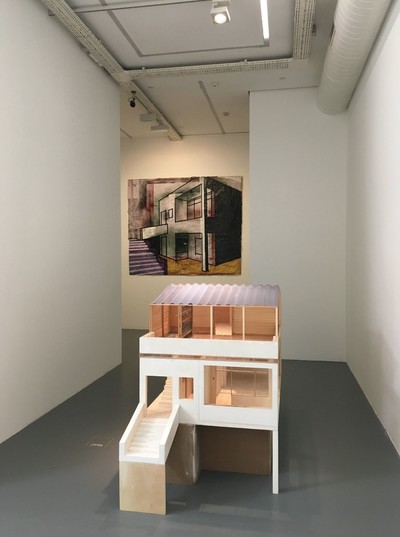 Aytekin based all of his paintings on a model of his grandfather's house in ‹stinye, titled "Empty House, Model" (2018) that was previously exhibited at MARSIstanbul.

Berkmen explained further by referring to the etymology of one of the Turkish words for home, "mesken" which comes from the Arabic root "sukhut" also meaning silence, or refuge. And more, "mesken" is also translatable as "tabernacle" which leads into the conceptual development of Aytekin's earliest series, "Temple Paintings." In her charming intellectual savvy, Berkmen carefully describes the relationship between the "Temple Paintings" and the "Empty House" series, citing an impressive sweep of curatorial literature on the comparative architecture of museums and galleries as sacred space.

Aytekin is working on a new series drawing from the voluminous, historical d Group movement of modernist Turkish art. Its works did not make it into his current show, a veritable retrospective at Arter for "Empty House." It was a decision executed by Berkmen, preserving his quiet prestige before a now gaining anticipation among audiences who are just getting to know Aytekin as a very profound, unsung Turkish artist who is generally off the radar of fairs, biennials and the like. Even for "Empty House," the ground and first floor at Arter were not spacious enough to show some of his most important pieces going back to his mystical "Temple Series." In fact, certain of Aytekin's works, such as for his "Garden Paintings" (2008-2009) were tailored for the size of his studio doorway, made as large as they would fit to be carried out. It's almost a practice that recalls the writerly passion of the American novelist Jack Kerouac, who was fed up with the size limits of type paper to the extent that he wrote on scrolls.

"We changed the space at Arter quite a lot. When Can came, he walked around and he was aware that the rooms were used more as a place to install objects. Because we rarely do painting shows at Arter, and there has never been a painting show on the ground floor and only one upstairs, Can walked up to the balcony and he thought of it as a terrace for important speeches as it actually has a powerful presence. We extended the balcony, and opened a new window for passersby. Usually, painting shows align paintings to line of sight, according to standard body height, we instead played with the limits and structures of this space. All of the paintings emerged from the 'Empty Space' model, but the model, in terms of its proportions resembles this space, and this space resembles other spaces, and any other homes, as noted by the ideas of peripheral vision and the body-and-sight connection," Berkmen said, illuminating some of the most influential ideas of the architect and writer Juhani Pallasmaa while standing in the former residence that is now Arter to muse on the metaphors of emptiness and domesticity. "The home of the 'Empty House' is based on Aytekin's childhood memories of his grandfather's house in İstinye on the Bosporus. It is very typical Turkish, DIY [do it yourself] architecture. Dealing with the past comes through the artist's practice, but it's not in a nostalgic way. It's about taking it, accepting it and moving forward. All the forms that you see since childhood and that are present in your culture play in the formation of your thoughts."