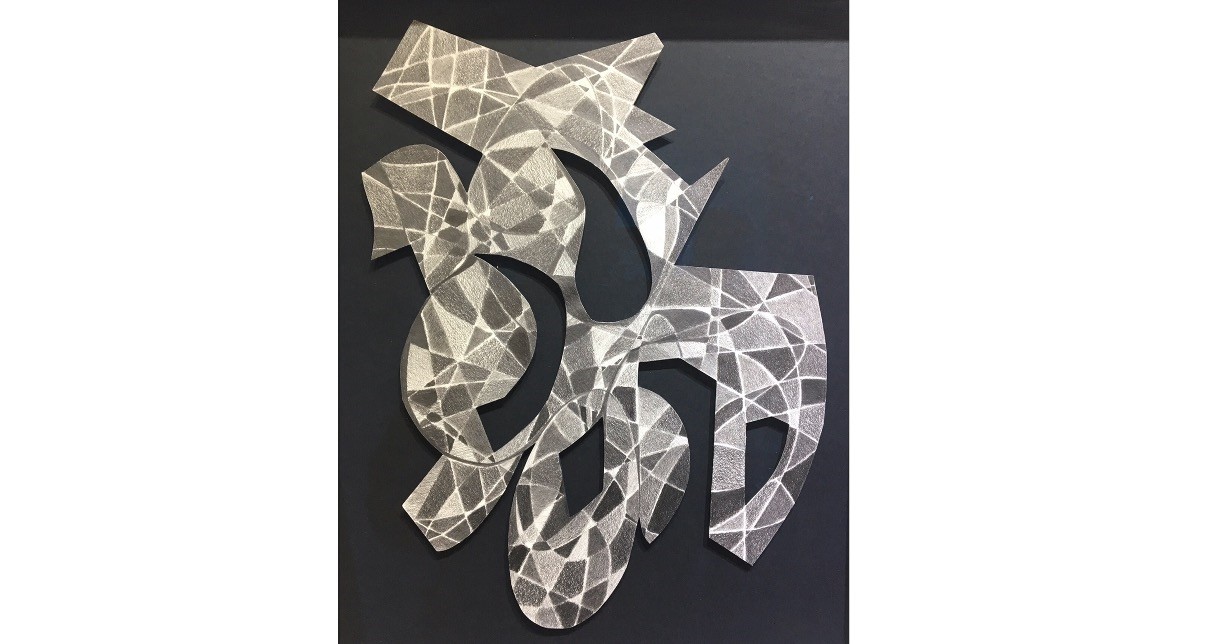 At the Memories and Letters exhibition, Gu00fcnnur u00d6zsoy reveals her artistic process from writing letters to pencil drawing that resemble her previous Costa Mesa series before embarking on her latest path in metal sculpting.
by Matt Hanson Apr 09, 2018 12:00 am

‘Memories and Letters' opened at Pg Art Gallery on the evening of April 4, and is ongoing through May 15. It exhibits the latest series by sculptress Günnur Özsoy, who transformed her signature aesthetic in marble, felt and polyester over the last year by writing, drawing and twisting sheet metal

In the first letter that Günnur Özsoy wrote to the art historian Marcus Graf in late February of 2017, beginning a yearlong epistolary venture culminating in her mixed-media sculpture exhibition "Memories and Letters," she remembers the Ankara of her childhood around a park named for its swans, Kuğulu. At the time of her nostalgic revisitation, she was then showing a piece from her recent Costa Mea series at Siyah Beyaz (Black White) Art Gallery and called her friend Sultan, who came with a surprise. She popped her trunk to show Özsoy a collection of letters between them going back to 1985. In her maiden letter to Graf, she described the heights of her ecstasy when she saw them. Handmade with her quirky brand of humor, intellectual warmth and unrestrained personal expression, her letters retain a distinctive charm through one of the last remaining mediums in which the inward, private life flourishes safe from the onslaughts of mass media and its technological gorgons. 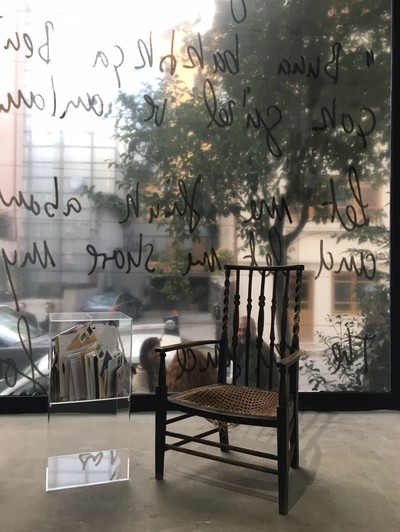 Günnur Özsoy curated her exhibiton with a typographic imagination, pasting larger-than-life scans of her letters to the art historian Marcus Graf, which prompted her Memories and Letters show.

Costa Mea, literally from the Latin for "My Rib," is an allusion to Eve of the Bible, who, as it reads, was created from the rib of the first man, Adam. Its series has feminist overtones intertwined within organic, polyester sculptures that embody the womanhood in Turkey contrasted with sparkling top-end auto body paint that she ordered from directly from European manufacturers. She then utilized a 3-D scanner to render the sculptures into images that she eventually designed into personalized stamps for her envelopes to Graf before broadening the experiment into many more slow dialogues over snail mail. She felt compelled to find a core pen pal, and Graf kindly accepted her invitation. It brought up her past in a profound way, transfixed by a curious event five years prior when she found letters in the basement of an antique shop by the philosopher İlham Dilman that he sent from England to Turkey from the 1950s to the 1970s. In many ways her show, "Memories and Letters," is a reflection of that discovery, reenacted through objects for viewers to literally step into the text of the letters at Pg Gallery, immersed in the storied mysteries of its neighboring antique shops.

The exterior storefront windows of Pg Art Gallery now face Çukurcuma, pasted with blown-up versions of letters between Graf and Özsoy, and inside an LCD screen flips through them for devoted readers to note the diverse range of Turkish terms of endearment. Her correspondence spilled ink over into her many and diverse social circles, who responded with drawings and poems, and as for Graf, in his comfort zone of English. In the process of writing letters over the course of the year to prepare for her solo show, she also cut up paper and sketched it in shades bearing a resemblance to her Costa Mea works as a prelude to the over 50 pieces of fired, monochromatic sheet metal that she modeled after first sculpting paper. 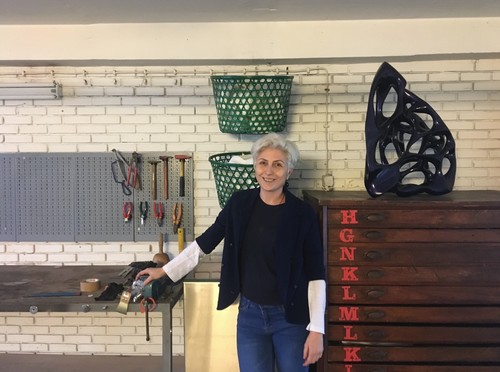 At the Industrial Auto Park (Oto Sanayi) in Maslak, Günnur Özsoy has worked out of her neat studio where she gravitates to materials like marble, felt, polyester and recently sheet metal to craft her abstract neo-minimalist sculptures.

A frayed wicker chair sits across from two typographic works ("a piece of art" on a simple canvas and "Buna Baktıkça Beni Hatırla" - Remember Me When You Look At This - in mirror glass lettering). A transparent case of opened, sent envelopes is kept over the spare concrete gallery floor alongside the longest wall covered in the metal sculptures that convey a sense of the empty plane similar to a page but not crumpled to throw away like the recent Present Tense series of sculptures by Seyhun Topuz shown at Galeri Nev Istanbul, but as a more trans-disciplinary, time-bound exploration of the second dimension. Her newfound sharp edges won over collectors and friends as "Memories and Letters" is her bestselling exhibition yet since starting her solo career at Pg Art Gallery in the winter of 1997-98. In the opening hours of "Memories and Letters" some thirty pieces were sold, many for up to TL 20,000 (almost $5,000 dollars).

Around the time when Pg Art Gallery began, its founder Pırıl Güleşçi Arıkonmaz walked into Ayşe Takı Galerisi (Jewelry Gallery) in Bebek, where she was formerly based, and bought a ring inspired by Don Quixote made by none other than Özsoy, who has since moved on from making jewelry, preferring other creative pursuits channeling everything from Turkic shamanistic divination techniques to wearable video art for trendsetting partygoers. In 25 years, Özsoy has had seven solo shows at Pg, counting the current exhibition, charting her aesthetic progressions that Graf defined in her 2011 show, Spiritual Experiences, as "contemporary neo-minimalism." Another of Istanbul's prominent international art critics is the Columbian writer Arie Amaya-Akkermans, who sees Özsoy as integral to the narrative of Turkish art history from modernism to the contemporary in relation to global trends.

"Özsoy belongs to a generation of artists who were widely exhibited and written about in the 1990s as the concept of Turkish art (as different from Western modern art) took shape. Artists experimented with materials from design and technical backgrounds rather than the traditional arts. When the curatorial framework of Turkish art emerged by the end of the 1990s, artists who weren't occupied with topics of identity didn't necessarily emerge internationally. They remain very relevant in the Turkish context, not only in exhibitions, but as educators, public commissions (of which Özsoy has had many), and in the art market," wrote Amaya-Akkermans in an email to Daily Sabah the day after attending the "Memories and Letters" show. "Pırıl [of Pg Art Gallery] herself is a brand name that doesn't need an introduction. "Memories and Letters" is a turning point in Özsoy's oeuvre. She's always been attracted to these organic forms that for me are identical with the hyper-spaces of contemporary architecture and the aesthetics of contingency represented by architects like Reem Koolhaas and Zaha Hadid. Organic here comes to mean abstract but now it's possible to see that this organic understanding of both living time and the formal aspect of art can have a minimal expression, and that's what happens in this exhibition."

A Critique of Abstract Minimalism

"The exhibition (Memories and Letters) is both retrospective and introspective. While on the one hand it captures the essence of the entirety of her career, it also creates a more fragile, more personal space. If you look carefully at the works, there's this paper-like quality to them, it's like they could break any time, but yet it's strong steel, and in a way it reminds you of early Jeff Koons. And because of the way her work breathes in spaces, for me it's always associated with architecture. It can't exist without our preconception of space being empty, like the white cube, but real space is never empty, they live in a paradox, and that's the beautiful part," Amaya-Akkermans wrote while planning an intervention with a young Italian curator for the upcoming Manifesta, a traveling European biennial held later this year in Palermo. "There's a shared history between the south of Europe and Istanbul in the legacy of the ancient Mediterranean region. Palermo reminds me a lot of Istanbul. We want to exhibit work in an ancient building where that paradox between the abstraction of organic forms and the maximality of architecture/sculpture are even more pronounced than in a gallery space. The concept is not final."

Street 6, at the Industrial Auto Park in Maslak, has for many years served as the studio space for Özsoy, as for many of her artist colleagues, also Pg, currently celebrating her 25th gallery anniversary in a "pop-up" studio only a few skips away showing its eclectic blends of past exhibition artwork together with new acquisitions and stunning gifts from the extended community. At one nondescript, barred and whitewashed facade, a sign reads, "Günnur Özsoy." Illustrated white clouds on the windows filter the reality outside on the raised alley above mechanic shops where repetitious hammering and grinding gears adds to the buzz of material contrasts and resourceful meditations for the many artist in studios surrounding hers. The works of Özsoy are neatly displayed as she welcomes with a mischievous smile and a tap at her cigarette fitted into an elegant holder. She exudes a powerful wisdom to the effect of the Taoist maxim: 'Those who know do not speak. Those who speak do not know.'"

"When I'm thinking or doing something, it's always flying away somewhere. When I start writing it is on paper. I have never done anything like this, because I don't like writing. I don't prefer to leave behind ideas about me. Now I'm really open," Özsoy said with a hearty laugh, candidly relaying her artistic metamorphosis as an inner, psychological change. "I find my innocence when I'm writing. It's similar when I work with metal, especially flatness, to find my own abstract, organic forms."