No man is an island: Tufan Baltalar in his element 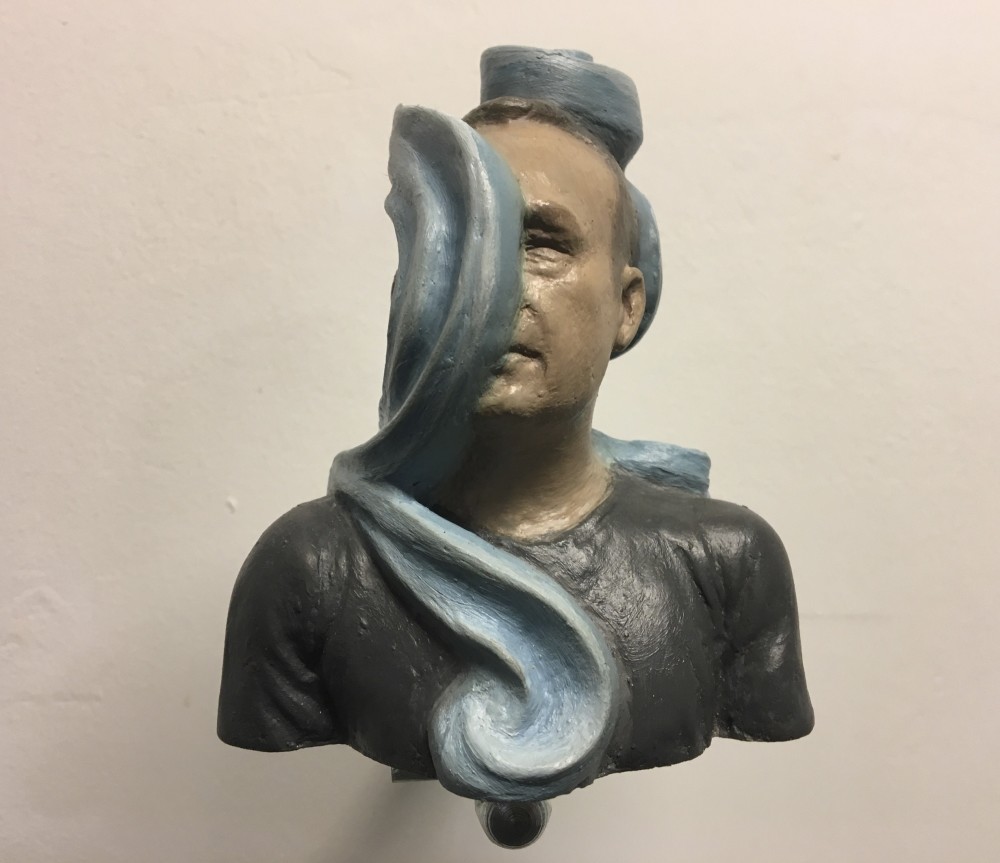 Introducing his fourth solo exhibition at Pilot Gallery, Baltalar prepared a triptych of his self-portrait in plasticine and polymer clay increasingly engulfed in a surreal wave.
by Matt Hanson Apr 14, 2018 12:00 am

Until May 5, Pilot Gallery is showing a series of new works by Tufan Baltalar for his fourth solo show, ‘Surrounded By,' including miniature, clay sculpture self-portraits and sketches preluding a wall of 30 paintings of islands symbolizing the emotional landscapes of collective consciousness

The common saying, "no man is an island" was coined by the English metaphysical poet John Donne in 1624, who also wrote "for whom the bell tolls" in the same poem, a phrase that echoed across the literary pantheon to become the title of Hemingway's most ambitious novel. In a similar light, the Izmir-based painter and sculptor Tufan Baltalar crossed the high seas of oil painting to cast his net over one of the most popular metaphors of the cultural imagination: islands. It begins with a triptych of self-portraits, his bust in three miniatures increasingly engulfed in a single wave, submerging into a single crest crashing down over his face to drown him in surreal obscurity. His sculptures evoke the archetypal human form embodied in the artifices of mankind, lost to the wild and unpredictable forces of nature.

Baltalar spends much of his time hiking alone and cycling immersed in the Aegean seaside. He rarely stays in Istanbul, preferring the inspiration of his home steeped in the lush, bio-diverse environment. In a series of sculptures suspended above the gallery floor at the underground Co-Pilot exhibition space in Cihangir, he is the main protagonist of his work. As a forest hermit nearing middle age, he sculpts his face as a backpacker covered in shadows of leaves from the imaginary canopy above with a keen eye for hyper-realism. Alongside his sculptural self-portraits are paintings on ceramic that convey the misty emergence of his central artistic focus: A tree on a solitary island, recurring like a dream before coming to full fruition in an array of styles and techniques on 30 canvases.

In his previous solo show, titled "Stand By" (his third at Pilot Gallery, where the artist has been represented for about a decade) he drew from the motif of clouds, mostly picturing a single white puff hanging in the iridescent blue. After seeing the work, his curators learned that clouds were all that he wanted to see for a time. Baltalar has a curious talent for opening windows to the direct perception of unseen psychological meanings and emotional revelations. For example, to stop and look up as a conscious practice weaves a complex narrative in his subtle hands. In his palms are spiritual eyes that gaze straight through the veil of the senses into the inner world. The islands of "Surrounded By" transfer the experience of specific feelings from artist to viewer uninterrupted. In his hybrid fusions of aesthetic crossbreeding, Baltalar is a naturalist painter of emotional realism, appreciating a transformalist mentality that captures the fluid transience of being. 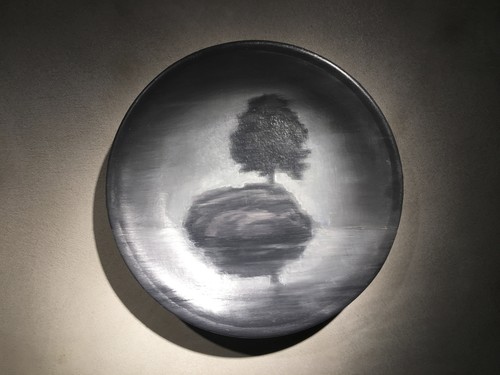 Baltalar's art is moody and he is his subject, whether overtly in his sculptures, or in a subtler, unseen way from within the islands that he has painted for his current "Surrounded By" solo show at Pilot Gallery.

Stranded on a Desert Island

There is entrancing beauty in the plainly obvious. With right perception, the simplest illustration becomes utterly complex, the familiar strange. Visions of the natural world, devoid of human presence, are irresistibly exotic. When reimagined with creative skill, they point to the basic existential truth that the senses are like two-faced mirrors that simultaneously separate and unite creatures and creation. The heart of Baltalar's works is its curation. His relatively diminished scales make more complete sense when accumulated together against the flat space of a gallery wall. Collecting his paintings into a unified paneled grouping best crystallizes his artistry, as for the clouds of his last show "Stand By" and the islands of "Surrounded By." Comparably, his sculptural self-portraits are playfully severed with limbs disassociated above the elbow and knee, covered in shade, vegetation, water, fragments of the body stretching out for and beyond the elements.

"The landscapes mostly refer to a person's or a society's state of mind. They are feelings or moods in the guise of a landscape. He loves to accumulate small pieces together to make a bigger piece. His paintings form an archipelago of individual islands. In literature, in popular culture, in cinema, the image, or the perception of an island has always been used as a metaphor for self-portraiture or consciousness," said Amira Arzık, walking through the half-empty gallery space to exhibit Baltalar's highly unique dialogue between art and space, prompting curatorial eccentricities. "These paintings are actually his state of mind, his mood. You have darker days, scenes at sundown, clear skies. External situations shape us, like a tree in the wind forced to lean right because of the wind. It is hopeful landscape, altogether. You have all of the small, lonely islands that float by themselves, but still you have the surviving trees. He doesn't want you to focus on individual islands but to see the larger landscape."

The curation of the pieces resemble the subjects of the paintings themselves. The totality of his accumulated paintings are as an island of artwork in the main room of the exhibition space where nothing else other than his paintings are curated. Next, each canvas is like an island, floating between other island canvases, surrounded by a sea of wall space. Framed are the painted islands, visible to the eye, yet reflecting islands of bodily isolation. Onward, the seer ventures into the white rabbit's hole to the wonderland of the private, emotional landscape that everyone experiences within, unescorted. While there are methods and means of solidarity, through love and community, "Surrounded By" takes a more introspective look, hinting at metaphysical places that are only experienced alone. It reconsiders the metaphor of islands as the ultimate fixation of collective consciousness to find an ideal ground for utopia and seclusion. 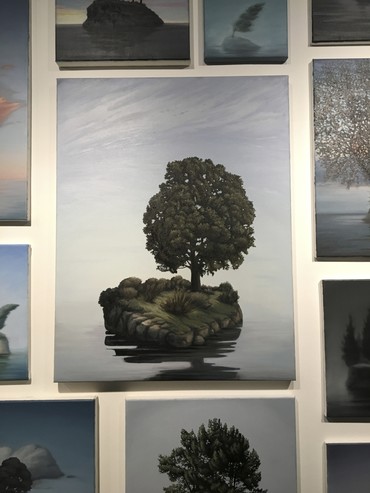 Pilot Gallery's exhibition notes to "Surrounded By" explore the island as a psychological metaphor by referring to examples in the history of literature from Homer's "The Odyssey" to Defoe's "Robinson Crusoe." It reads: "In [Carl] Jung's analysis, large bodies of water symbolize the unconscious and the islands represent the ego, in other words, the conscious mind. Sometimes psychoanalysts recommend drawing islands; as such they are self-portraits in the form of landscape." The trend continued among iconic 20th century writers, such as "The Island" by Aldous Huxley and "Lord of the Flies" by William Golding, and in the more contemporary novels-turned-films "The Beach" by Alex Garland and "Shutter Island" by Dennis Lehane.

For the last year, Baltalar has prepared for "Surrounded By" by first sketching and redrafting islands with a critical eye before painting for some seven months in his studio. In the hallway leading to the main floor at Pilot Gallery, there is a series of eight roughly painted, monochromat

ic islands on paper that preface his oils on canvas. Blooming with radiant color, some with sharp detail, others in a more abstract haze, his aesthetic recalls the eerie ethereality of the German landscape painter Caspar David Friedrich, whose 19th-century Romanticism redesigned the nature of seeing as he shone a spotlight on the illusive fiction of objectivity, fantasizing the world at will as a folklorist spinning a tall tale that tells of truths more real than the pursuance of fact in the narration of settings. Unlike the naturalist romantics of old, Baltalar is a more steadfast visionary of symbolist form. His distillation and deconstruction of a single image, one at a time, is what makes him stand out among his peers in Turkey and throughout the world, as well as in the global history of painting, and art-making.

"The idea is to give you a hopeful image, that you are not alone. Even if the islands look alone they are not. For some, he might be different from most artists exhibiting at Pilot Gallery. We usually do not work with painters at Pilot, but Baltalar is so delicately, kindly, and elegantly describing the mood of the collective consciousness in his painting and the Gallery's program is very much related to collective consciousness," said Arzık, who works at Pilot as its associate director in charge of media relations, yet even during office hours when standing in front of the paintings of Baltalar she takes a long moment to absorb the emotional charge of his work. "He is not a landscape painter. He is much deeper than that. That's why he is in this program. These landscapes are not only decorative. They tell much more about the current days of the country, the current days of the people who live in the country, even the world."