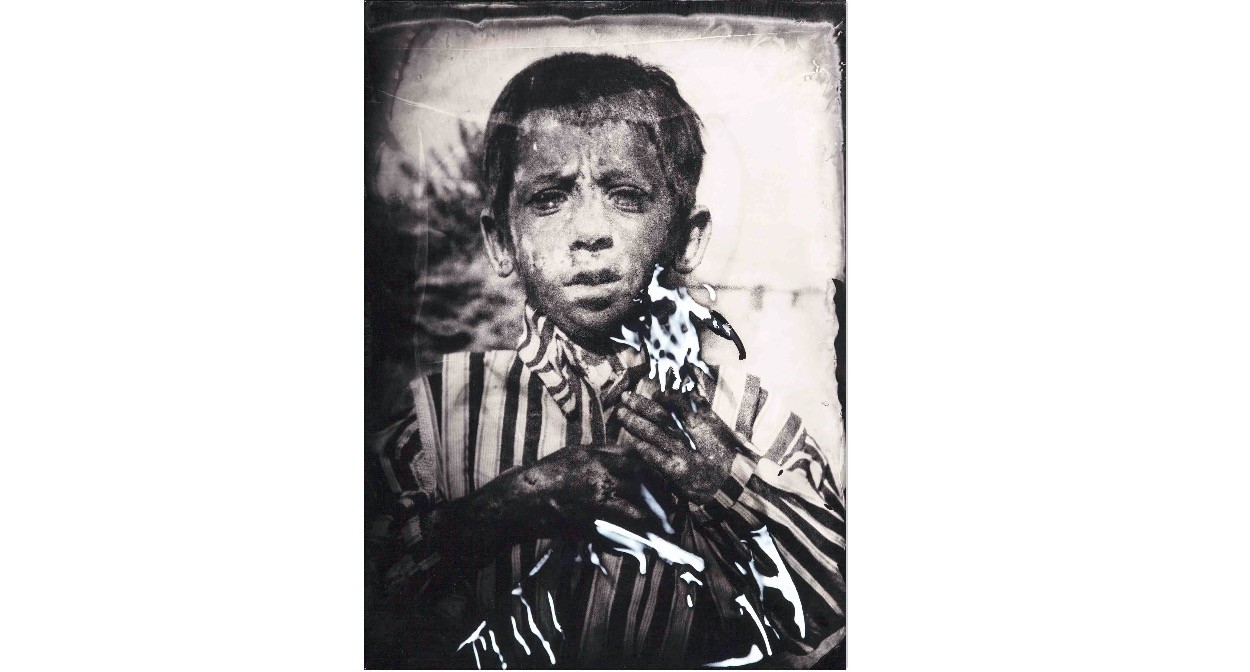 From one of the more striking series of found negative film presented for u201cFading Awayu201d the artist Yusuf Murat u015een resurrected the living presence of children in u015eanlu0131urfa affected by leprosy, altered with wet collodion on plexiglass.
by Matt Hanson Apr 24, 2018 12:00 am

Yusuf Murat Şen, former Head of Photography at Mimar Sinan Fine Arts University from 2007 to 2013, is a professor and artist exhibiting his latest approaches to antique photography using wet collodion and ambrotype on mirrors, polyester film and gum bichromate prints at Versus Art Project until May 6

"Fading Away" is an atmospheric introspection into the dark realms of early photography. Its impressions of rediscovered light chronicle over a century of remembrance, focused through one artist's original practice spotlighting, transforming and redesigning the appearances and textures of visualized nostalgia and lost time. In ways similar to the gradations of color from white to black in the palettes of classical painters, the photographer is an artist of light, a magician of the moment, exposing film to the sun and washing prints in the chemical alchemy of image technology born from the heyday of mechanical invention.

The maker is Yusuf Murat Şen, a soft-spoken, affable man born in the southeastern Anatolian city of Şırnak in 1968, and educated in Gaziantep before entering the realm of Istanbul to attend Marmara University. In the year following his inaugural 1991 appointment as a lecturer in the Photography Department at Mimar Sinan Fine Arts University, he held his first solo show, "Specific to the Place" at the Istanbul Sultanahmet Old Prison. Şen is a master of the antique aesthetic and its revitalization in the present. He approaches technological anachronisms by exploring obsolete methods of capture and development, also restoring old, collectible negatives with a fine skill and a weakness for chance, bridging intuition with intention. 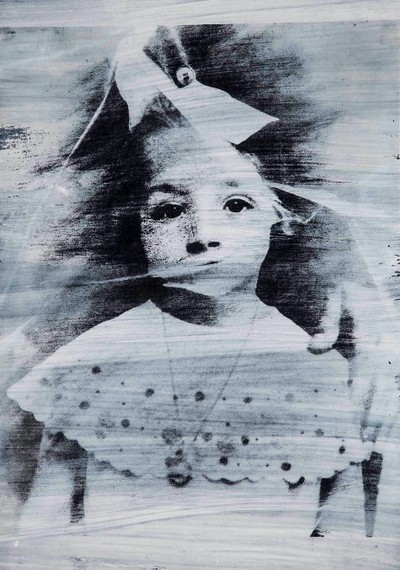 For his gum bichromate prints, the antique subjects of "Fading Away" emphasize the immediate human connection through the eyes, windows to the soul that bridge the past to the present.

"The solo exhibition of Yusuf Murat Şen, titled 'Fading Away,' is a form of meditation around the photographic image [...] The photograph travels from a glamorous frame, to a moldy drawer, then to the attic, the storage, the bin, and if lucky, to the flea market, and its aura fades, leaving behind nothing but a cold stain," sociologist Ezgi Bakçay wrote for the "Fading Away" photo book. "Yusuf Murat Şen, by reprinting found negatives multiple times, presents the process of fading away. He transforms the process of the decay of an image, into a form of a mourning ritual [...] As the decayed photographs merge, they become one under the ghostly visage of the portraits they carry -- masks of the dead, one might say."

The initial four of his some 55 pieces currently on display at Versus Art Project are inspired by a composite shot titled "Fading Away" by the 19th century British photographer Henry Peach Robinson, who defined the antique look of the early modern imagination. Şen restores outdated effects with an artist's eye, employing special historic techniques. Wet-collodion, for example, is one of his principal materials, invented by Frederick Scott Archer in 1851, to make photographic plates. Şen crafts the spill of collodion with artistic inspiration, gleaning the dangerous chemicals from Mimar Sinan Fine Arts University facilities where he has worked for over two decades. "Fading Away" also brings to light his ongoing archival curation of 20,000 to 30,000 abandoned and damaged film negatives, antique pictures that he finds in Istanbul from the trash auctions to the used bookshops with Proustian persistence at the bottom of the heaps of miscellany that stock out-of-the-way bazaar markets and various sellers-of-old-things. 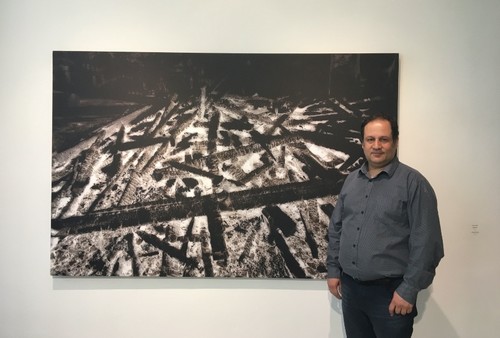 Yusuf Murat Şen stands in front of the sole photograph that he took himself for his "Fading Away" exhibition at Versus Art Project, with most of the pieces representing alterations of mediums and techniques from found antique negatives.

Outside of his work in the classroom, darkroom and beyond his extensive home archives, Şen directs FUAM (Photography Research and Application Center) and has served in the same capacity for the past three years to organize the Istanbul Photo-book Festival, which will soon take place from May 4-6 at Mimar Sinan University's downtown campus in the Fındıklı quarter. Internationally exhibited from Sweden to Syria, and holding group and solo shows across Istanbul from trendy pro-youth galleries like Karga Art, to more formal historic institutions like the Tophane-i Amire Arts and Culture Center, he walked into the turn-of-the-century building of Versus Art Project, behind Atlas Cinema in Beyoğlu, where he recently participated in two group shows, Locus in 2016 and Atapos Project in 2018. In the middle of the approximate month-long duration of the "Fading Away" exhibit, he spoke with curious students and workaday critics during an extended afternoon visit, as generous in the expression of his thoughts in person as he is with the creative enthusiasm that goes into each and every one of his retouched works.

Şen is a seasoned traveler in more ways than one, through time in his photographic art, and frequently in Europe, most recently for a FUAM exhibition at the University of Macerata. Unique from his previous shows, "Fading Away" focuses more on figure portraiture and on what he calls "the gaze" of subjects who peer back from the abyss of untold histories. "Fading Away" departs from those stares that pierce through the veils of collective memory to form an immediate relationship between viewer and viewed. The old adage that the eyes are the windows to the soul are highlighted with entrancing vision in the hands of Şen, a seer into the shared lens where pupil meets glass, a seeker of ghosts behind the shadows of photorealism and into the vagaries of the unknowing wisdom that all is transient and will fade. 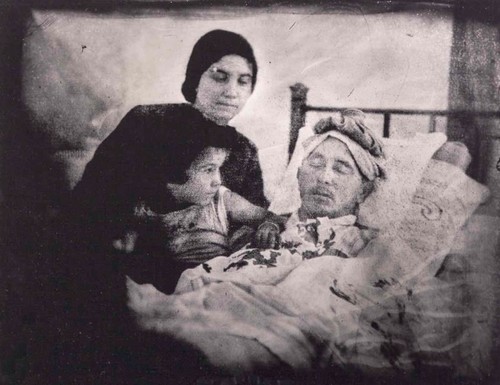 The inspiration for the "Fading Away" exhibition is a photograph of the same name by 19th century photographer Henry Peach Robinson, who also depicted a deathbed scene, only ﬁen retouched a similar subject with wet collodion techniques.

"I transform and mix techniques. No photographer uses silver pigments for gum bichromate. I print on black paper, and polyester used by ancient printers. More than the outcome, it's about experimentation, to experience the process of creation. All of these photographs have a past, a life," says Şen, an unbounded artist of the photograph; akin to the international slow movement, he patiently delves into historic practices with a calculated perfectionism. "Working in an academic environment is a constant exchange of ideas, with other creators and disciplines, whether it's a sculpture, sociological theories, or conversation with other professors. Having so many students gives me the opportunity to be a role model with my works and exhibitions, especially when they stand out in the art scene in Turkey, when I'm recognized, or receive invitations from abroad. The students trust me."

The silence of technique

Unlike others previously exhibiting work at Versus Art Project, for example "The Third Nature" series by Gökhan Balkan, the art of Şen is not wrapped in abstract, intellectual theories. Şen does not necessarily begin with an idea, and then seek to mold his work accordingly. Instead, he pursues a more instinctual process, supported by his highly trained academic background and technical refinement with respect to the protocols and risks involved in handling deadly solutions and antique film on the edge of total disintegration. "Fading Away" explores certain motifs based on his archival and field research into abandoned film negatives.

One of the more striking is a series of historical photographs of children affected by leprosy in early 20th century Urfa, combining elements of a bygone mortal disease traced with splashes of wet collodion developed on plexiglass. And his reflective ambrotype prints offer roaming eyes a mirror through which to see oneself merged within antique portraits fading away, scarred by the dry runnels of its creased and damaged negatives. The effect is a manifestation of the Decadent Movement's poisonous book in "The Picture of Dorian Grey" by Oscar Wilde, only Şen concocts a purely visual experience like that of bitter medicine. He further emphasizes and elaborates on the truisms of the long lost past of times gone by with another series of group photos, stunningly altered to capture the faceless herd agglomeration of the human masses, as through a discomforting metaphor that recurred at the peak of the industrial factory age in the 1930s when many of the negatives he redeveloped were first taken, materializing like something out of Charlie Chaplin's 1936 working class farce "Modern Times."

"It's really important to separate what I do for art exhibitions with what I teach. I want to widen the horizons and teach as much as possible, but apart from my personality as a professor, this is my own take on photography. It makes me happy to see that the fact that I use many mediums and techniques becomes an inspiration for students. I show them that there are different approaches to print photography, antique and modern. They take these techniques and use it in a different way," said Şen, who enjoys impromptu conversations at Versus Art Project, laughing while explaining the sole archival installation of "Fading Away" because it lessened the clutter in his family home to the relief of his wife. "I have collected photographs for the past twenty years. The first encounter that I had with a found photograph was with one taken by an Ottoman photographer, a famous one at the time. It was cut, burned, worn, and had the photographer's stamp. I touched the photograph. It felt like a handshake with the photographer. It's not about old photographs that you can see online. It's about collecting them and really feeling them."