Forming an intimate platform for spontaneous activities, performances and talks, SALT Beyoğlu's Walk-in Cinema will host a screening program titled "Spatial Negotiations" on May 26 and 27.

Produced between 2009 and 2018, the works reflect the impacts of late history on the urban environment, while examining its manifestation in the collective memory.

Introducing the Minhocao, an elevated highway that runs through the center of Sao Paulo in Brazil, Rosa Barba's "Disseminate and Hold" (2016) investigates the role of urban structures and landscapes as political tools as well as utopian reforms in the program. 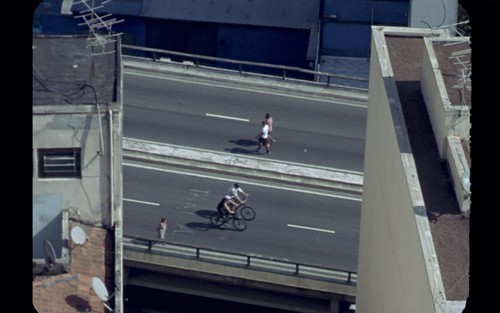 Still from the video work "Disseminate and Hold (2016)" by Rosa Barba.

Focusing on the changes occurring on the highway and its surroundings since its construction in the 1970s, the artist investigates the shifting dynamics of the complex relationship between Minhocao and the locals through archival shots and interviews. The 21-minute, Portuguese video will be screened at 02.00 p.m.

Set inside a quintessence of a modernist building, the former Palace of the Federation in Belgrade, Serbia, Jasmina Cibic's "Tear Down and Rebuild" (2015) puts forward how art, architecture, and visual language can become fundamental instruments for nation-building as part of political rhetoric and power strategies.

Representing a nation builder, a pragmatist, a conservationist, an artist and an architect, the four protagonists debate the consequences of demolishing a historically charged building with quotes from Prince Charles, Benito M

ussolini, Ronald Reagan and Margaret Thatcher. The 15-minute video in English will be screened at 02.00 p.m.

"We will meet in the blind spot" (2015) by Maj Hasager, is shot in and around the Esposizione Universale di Roma in Italy, a site built for the 1942 World Exposition, which never took place due to the World War II.

Initiated under the rule of Mussolini, it was completed in the 1960s and was revived only to become a set location for Italian filmmakers. Hasager's work documents how the glorious marble site recently became a meeting place for the local Christian Filipino community and hence faced the country's fascist past. The 38-minute video will meet spectators at 03.00 p.m.

"Machine Space" (2018) borrows its title from a term introduced by geography professor Ronald Horvath in 1974 as a "territory devoted primarily to the use of machines, shall be so designated when machines have priority over people in the use of territory."

The work by Stephen Connolly investigates Detroit's economic structure, which once was based on automobile production, being replaced by the spatial economy.

Analyzing urban space in Michigan as a product and how it is shaped primarily by habitation and racial privilege, Connolly draws attention to capitalism's influence on the city landscape. The 24-minute English video will be screened at 04.00 p.m.

Marie Voignier's "Hinterland" (2009) examines the Tropical Islands in Krausnick, Germany, a resort welcoming visitors under a dome that was once a Soviet military airship construction base during World War II. The work reflects back on the place's history hidden through the glimmering illusion of the so-called tropics while drawing attention to the economic exploitation of service industry cliches. The 45-minute German video will be presented at 05.00 p.m.

The public screenings will take place in the Walk-in Cinema at SALT Beyoğlu over the course of the weekend. All videos are subtitled in Turkish and English.