The end of the tunnel: Sena Başöz at DEPO 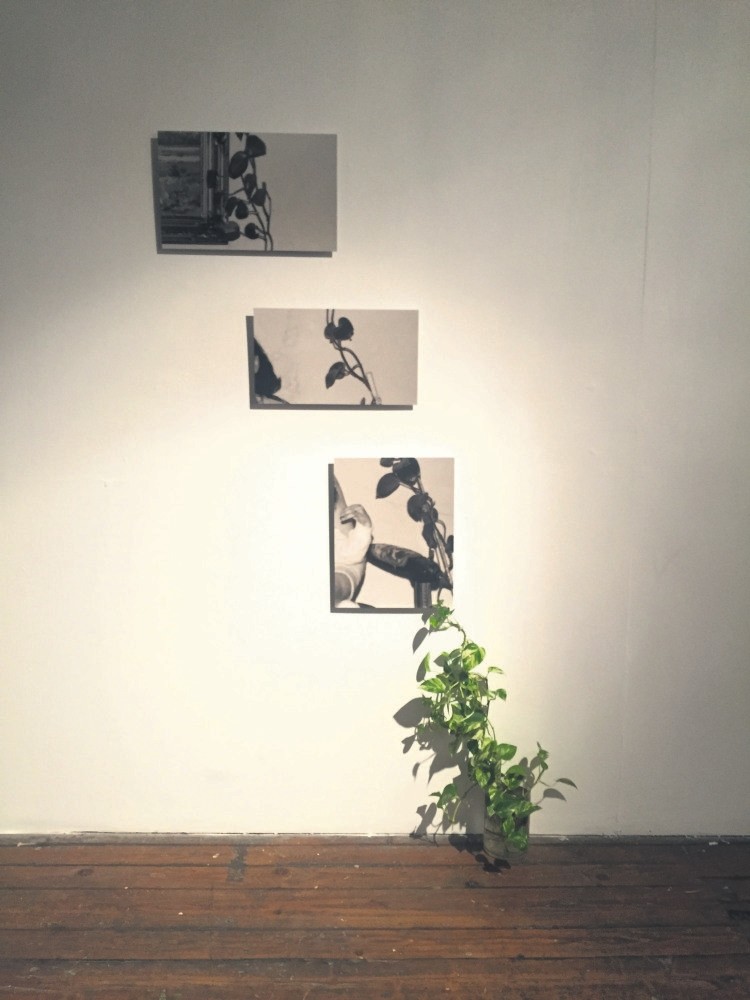 u201cIvyu201d (2018) is a fine art print on aluminum, containing a single imaged cropped into three. It tells the multigenerational tale of the artist, her mother and grandmother as a reflection on womanhood and tradition.
by Matt Hanson Jun 26, 2018 12:00 am

It gets darker ascending the penultimate floor at DEPO, the old tobacco warehouse that still exudes the musk of work hands covered in the smoker's leaf. Between wooden beams and floorboards heavy with history, Sena Başöz lifts the gloom and weight of trauma with her solo show ‘On Lightness' until June 30

The lights of Paris burned on the horizon as they flickered in the mind of the artist and filmmaker Sena Başöz, sparking her thoughts into ideas to conceive new pieces for her residency at Cite International des Arts last year, where she designed to research alternative methods of trauma healing. It began after producing her video, "Doctoring" (2010), a 12-minute meditation on the friction point where the body touches the world. It opens with a seemingly uncomfortable close-up on scraped flesh delicately bandaged, only the arm is soon revealed as a photograph. The artist then proceeds to dress various images, actual physical developments of film removed from the frame one by one until finally, the background reality is unveiled as a basic, nondescript, flat and colorless surface.

While studying film and video at the prestigious and countrified Bard College in upstate New York, her distinguished professor and fellow artist Cecilia Dougherty turned her on to the experimental narrative styles of Georges Perec, the wild-haired French novelist and star child of the art world for his linguistic trickery. His eccentric literary remembrances of his parents' death in World War II, and the details of his survival as a child in war-torn Europe are distilled by Başöz as "describe your street, describe another". He is most famously known for entirely avoiding the most common vowel in the French language, the letter "e", in his novel, translated as "A Void" by Gilbert Adair, to imply the Holocaust indirectly by means of a detective story. 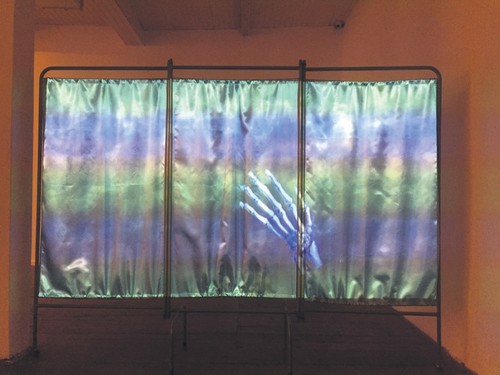 "Screen" (2016) by Sena Başöz, was made with the medical screen of her father, a retired surgeon, as well as a video projection she produced in 2015 in Çeşme in the midst of the ongoing refugee crisis. The piece is in variable dimensions.

"All of the pieces in the exhibition [On Lightness] are about healing and getting lighter. Some were inspired by very heavy events, by life and death, even the afterlife and the idea that nothing really dies. Nothing that has happened is lost to history," wrote Başöz in a recent correspondence as she travels between appointments teaching contemporary art classes at Boğaziçi University with a reputation for exhibiting works from Experimental Field Tokyo to Cannes Film Festival among other venues of note.

In the dimming light leading up to the second floor at DEPO, a framed piece of paper is tacked to the wall just above the last stairway step at about knee-level. It is, "Mobility" (2017). The work is almost unnoticeable, and all the more faint is the simple drawing on it, etched in pale graphite. It is an elementary sketch of boxes propped up together like a puzzle fit into place, all rolling along on top slight fixtures of tiny wheels. The drawing has a most curious effect as a curious pair of eyes will peer in through the hefty, industrial wooden architecture of the warehouse interior and see a transparent pile of rectangles. The related piece is "Boxes" (2017) made of metal and nets in various dimensions.

"Sometimes things resolve slowly and gradually in life. There are also sudden epiphanies. For me, the transparent boxes are a "what if?," like a change of paradigm. Heavy closed boxes could also be light and transparent like this.

Since my exhibition is on lightness I only put the light boxes this time in the DEPO space," said Başöz about her production, initially for the Sharjah Biennial's offsite project Bahar in Istanbul, which started with her going to the hardware store to buy cardboard boxes and then trying to transform and resolve them with water, but after failing she ended up with what she calls ghost boxes. "The drawing, 'Mobility,' can be read as an explanation as to what happened to the heavy cardboard boxes. They are more mobile now. The boxes can also be read as how the human mind reads the world, categorizes and groups. Being light and transparent is about being able to move beyond analytical thinking, and the fragility of analytical thinking." 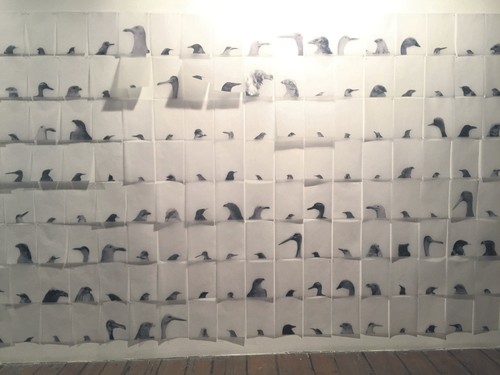 "Forough" (2018) by Sena Başöz is a series of digital prints on tracing paper with fans in variable dimensions, conceived with the Natural History Museum at Istanbul's Saint Joseph High School during her exhibiton at the Capsule show which ran from April to May.

Başöz is the daughter of a retired medical surgeon, whose medical screen, purchased in 1982, stands to reflect the projection of her video, "Screen" (2016), commissioned by the SPOT Production Fund. In her visionary way, she ventured beyond the field of scientific analysis as it exists in her family, into the more nebulous, intuitive realms of art, especially that of the fluid elements of chance in video and film. And yet, as she says in the context of her work, "Boxes," what is moved can also come back.

She returns to visions of her upbringing, literally touching on her personal history with the luminous hand of a virtual skeleton floating across the Aegean Sea. It is a visual device that she filmed in the summer of 2015 in the İzmir province of Çeşme to raise her voice, as so many countless have done, about the refugee crisis that has raged across Turkey towards Europe since the outbreak of the Syrian Civil War, and which with a healthy knowledge of life on the planet, is understood in continuity with the greater, ongoing saga of human movement, and in the context of biological evolution from time immemorial.

"The sea is the source of life. I see this video as an ultimate unification, as human body parts are dispersed on the sea. The white bones and human body parts are cut out from an anatomy atlas. They float on the surface of the sea. There are playful moments like when the spine acts like a fish," said Başöz, who shot the video as refugees crossed from Çeşme to the Greek island of Chios. "I trust that nature will regenerate itself. Healing requires privacy. Organisms heal on their own. In the long run, nature will obtain a balance."

On Lightness reaches profound heights in the impressive scope of "Forough" (2018), hundreds of bird portraits created via digital print on tracing paper. The work has a kinetic aspect including fans that oscillate to blow air against the pages as they flap under the artificial wind, stuck fast to the bare wall of the exhibition space. In the true fashion of DEPO, the art makes a critical reference to social history. Başöz set her sights on the Hafıza Merkezi-Memory Center (in English, the Truth Justice Memory Center), an independent, human rights organization founded by lawyers and journalists in November of 2011 in Istanbul to enlighten the issues that beset post-conflict regions.

The concept began as a smaller piece with a single fan, and then expanded when Başöz received an invitation to show Doctoring and Wild Mammals of Turkey (2009) at the Capsule exhibition in Istanbul's Saint Joseph High School, eventually collaborating with its Natural History Museum, which preserves the oldest and largest collection of flora and fauna taxidermy in Turkey. The museum allowed public visitation for the first time during the exhibition's run from Francophone Week to May 11, during which time they granted Başöz permission to draw the birds for her work. She produced the stunning number of animal portraits with a prolific vitality, all while immersed in the enchanting displays of winged beasts.

"Initially the starting point of the work was about lost lives, lives whose freedoms were taken away, lives lost while their stories are limited only to portrait photography. When the museum accepted my request, it also became about the afterlife of an archive, and reversing the colonial look at nature which categorizes, and names," said Başöz, who is planning her next artistic vision around the ideas of healing and archival representation. "I don't hide that its industrial fans that make photographs of dead birds fly. I don't hide that 'Feet' (2018) is carved out of styrofoam. If you look up close to Eraser (2018), you will notice two bird portraits from 'Forough' flying with a mini fan attached to the ceiling. I want to make a small gesture that proves that these birds can really fly about 150 years after their death."

"There is the piece called 'Ivy' (2018). It is three images cropped from a personal photograph. On the original photo there is me as a baby on my grandma's lap and my mom by her side. Three generations of women. The ivy in the picture is a common ivy that exists in many households. It is a very strong and adaptable plant. It can regrow and regenerate if you cut pieces from it and it survives in plain water, in addition to soil," wrote Başöz. "This piece is about regeneration, life and death and the passing of womanhood through generations. I believe my grandmother is like an ivy planted in soil. So is my mom. My generation experiences a different kind of womanhood. We are inheriting tradition but we live away from the land of our ancestors. We adapt to new circumstances and transform tradition just like this plant surviving with our roots in water. The plant is doing really well in the exhibition space. It's healthy and has grown almost 15-20 centimeters since the show opened."