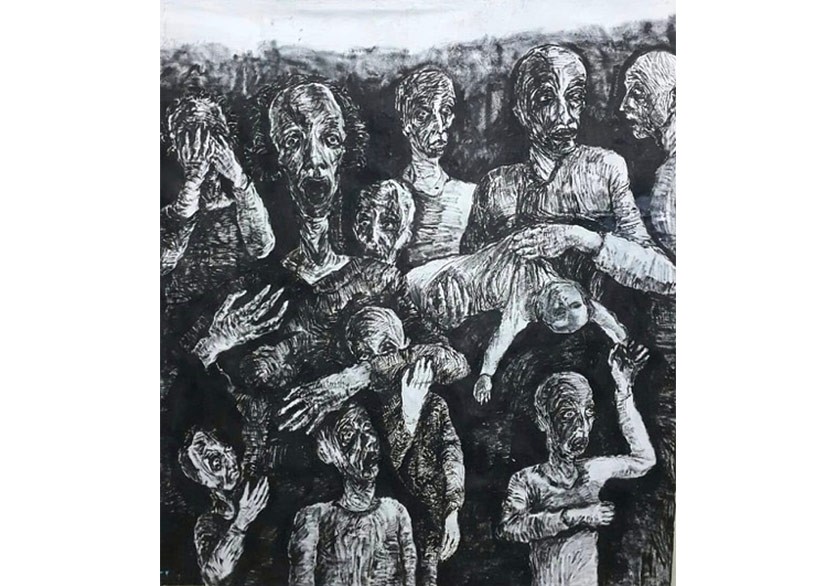 Underground at Adahan, a boutique hotel and terrace restaurant in the stylish, historic Beyoğlu neighborhood of Asmalı Mescit, the works of 11 Turkish and 11 Iranian artists guide seers to absorption, in the exotic ambiance of the old Genoese foundation, to peer into an intercultural vision of immortality

It must have been some kind of storage cellar, for the musty Italian wines of the Dark Ages, beside the rotting cheeses of Anatolia and the flea-bitten rugs that had come in unkempt heaps from the sprawling reach of the Silk Road, all crawling with the sable rats that would hitch free rides to Genoa as the late Byzantine colony built the Galata Tower in 1348. It was only two years prior when the Black Plague began to spread after a nameless, haunting spell wafted in from the east, annihilating over half of Europe.

Though, it appears more elaborate than mere, empty space purposed to store the goods and wares of old. There are finely built arches, multiple rooms, long hallways and a raised, central platform. It lights well and the ceilings are high. Most contemporaries confess blissful ignorance as to the origin stories of the basement under the chic hotel restaurant Adahan, which is generally loved by locals and foreigners alike for its spectacular panoramas of the ancient megalopolis, where the towers of New Rome and the islands in the Sea of Marmara offer powerful visual delights.

"I'm a painter, but 20 years ago I opened my first gallery and art institute in Iran, in the really small city of Bushehr close to the Persian Gulf. We didn't even have electricity, water," said Tima Jam, the Istanbul-based Iranian curator of "Immortality" at Adahan, and founder of the arts agency Blue Rhino.

"My father said that he didn't want me to be a painter, and I had to be a doctor or an engineer. I tried electronic engineering and didn't like it. I graduated in computer science. This was my first bachelor's degree. My second bachelor's degree was in fine arts, at an online university from Tehran."

Jam left Iran for Malaysia to pursue an MBA in art management, where she would learn the role of art in multimedia campaigns stimulating new entrepreneurial businesses. After that she went to Armenia, followed by Croatia, where she lived for a year while preparing to continue her studies in art management as a Ph.D. candidate in Amsterdam, for which she had earned an enviable scholarship. It was then when she came to Turkey, by accident.

The catch was that she had to apply for her Schengen visa from Iran. On route to Tehran via an indirect flight with a layover in Istanbul, she missed her flight. To pass the time, she struck up a conversation with fellow Turkish travelers in the smoking lounge. They made a lasting impression on her as they spoke amorously about the glories of Istanbul, emphasizing that she must see it for herself. Finally, after waiting and hearing more about the wonders of the great Turkish metropolis from other passersby, she boarded a flight back to Iran, where they denied her visa. She would never get her Ph.D. from Amsterdam, and back in Zagreb, her residency was about to expire. 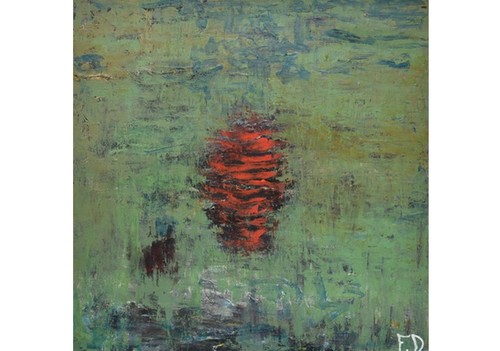 "I went to Zagreb and grabbed everything. I came to Istanbul to stay for three months, started my doctorate here, and finished in strategy management at Yeditepe University. Two years ago I opened my company Blue Rhino, organizing exhibitions, competitors, and residences. If someone is looking for artwork or an artist, we promote our artists," said Jam, as she sat amid the luxurious cityscape vistas on the top-floor bistro at Adahan, looking back at an active career in Istanbul where, among many other shows, she curated the recent exhibition of Iranian artists at Space Debris in May, titled Beautiful Death. "Iranians have less opportunity to travel than other nationalities. We like to keep our tradition. For example, we respect family, grandparents, like when someone older enters we stand up, to keep the manners and customs."

Jam chose Adahan's underground gallery specifically because of the theme of the exhibition, for its immortal ambiance. It has an energy that transcends death. She decided not to open a fixed gallery in Istanbul. Instead, her curation is often site-specific, as installations of artworks set to particular places in the city that accord with the concepts of her creative designs. Part of the deathless vision of her current show is based on how Adahan's architecture merges with the impressive renovation of the historic space. 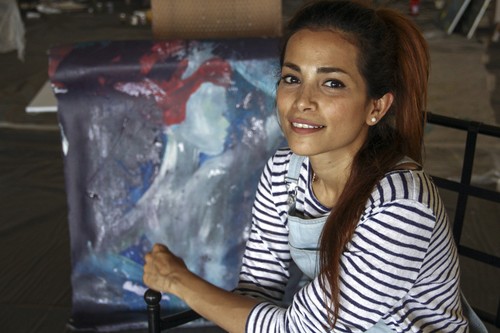 "It's old and it's continuing, like infinity. In terms of the place itself, I had to make a show here, and I had in my mind, immortality. If I want to open a gallery, I can. I'm not interested in opening a gallery. My startup company concept is about making events anywhere, especially in places that are not well known as galleries," said Jam, who appreciates the Genoese heritage of the Adahan building, and its present transformation as a center for contemporary art. "The rhino is a symbol of strength for me, and in my culture, there is a saying, 'strong as a rhino' because of its thick skin."

The fountain of art

"In different ways, all of the artists show how they're fighting to continue to live, even if they are not always successful," said Jam, who partnered with CAMA (Contemporary and Modern Art) Gallery, based in Iran and London. "Saeed Asadi painted a sofa, which has a story behind it, where it passed from generation to generation. Ali Motamedian showed infinity with a historical tower in Iran, and Dariush Hosseini with crickets that attack a farm, destroying it. But at the same time when you look at the painting, it is full of light."

Blue Rhino represents some 2,000 artists from all over the world, from Malaysia to Croatia, India, China, Italy, Spain. Many of them are from Iran and Turkey. It is the result of Jam's voracious appetite for discovery in her 20 years of working and traveling in the fields of art production, exhibition and appreciation. She knows many of the artists in the "Immortality" show personally, though there are a few recent acquisitions, for example, the very young painter Ferhat Salman, from the village of Kızıltepe in the district of Mardin. He had a show at the affordable, pro-youth art fair, Mamut Art Project, where Jam met him, and also another of her Immortality artists, the sculptor Görkem Usta, whose piece sold on the first day and is on its way to a collection in San Francisco.

"Firstly, we wanted the show to be contemporary. When you are curating, the place of the artwork has a reason," said Jam, who arranged the pieces to have a sense of action, where, for instance, the mixed technique work of Gökhan Deniz, "Ses Çıkarma" (Utterance, 2012) stands next to Dilara Mataracı's painting "Sonsuzluk" (Eternity, 2015); the former silencing the sleepy air for an infant in its mother's arms in the latter.

"Iranian and Turkish cultures are close. They have a hard situation, and they both try so hard to continue life. There are similarities in their ways of life. If you go back in history, you see that Iranian and Turkish people have fought to be alive, and they don't give up," says Jam.

Most of the Turkish artists are well known, such as Mustafa Horasan, Seydi Murat Koç, Barış Sarıbaş and Gülveli Kaya, who is head of the Fine Arts Department at Yeditepe University. Most are university lecturers, including the Iranian artists, and the average age is close to 40.

The Iranian artists are known in Iran, with the exception of a few world-class names like the abstract painter Reza Hosseini. About 30 percent were taken from the artists' collections, while 70 percent were newly made, many in the current year.

The artists, being generally established in their practices and styles, were not poised to contribute something truly new aesthetically, technically, conceptually. But that isn't the point of "Immortality." Jam conceived the show to advance the intercultural blend, Iranian and Turkish, visualizing it as a whole, shared expression through art, regardless of politics, religion, or tradition. It was advantageous to her curatorial design that the works weren't entirely produced for the show itself, but that they represent the uninterrupted consciousness of the artists at work in their respective countries.

"These 11 Turkish artists have never shown together under one concept like this, and they haven't had a group exhibition with Iranians. The same goes for the Iranians. I tried to unify the 22 artists. This 'Immortality' show is not the last, I have another coming up, bigger than this," said Jam, who, coincidentally, had previously exhibited the concept of curating Turkish and Iranian artists together for an art fair in Genoa. "Artists are free to show their opinions, but I always tell my artists that if they want to do something about politics or religion, I'm not in. I'm interested in art itself. The works come from their culture, as when you see the elephant of Hamid Asadi's 'Untitled' (2015), or the deer of Koç's 'Tabula Rasa Series' (2018), a baby and mother in Kaya's 'Life' (2013), Horasan's self-portrait 'Untitled' (2018)."