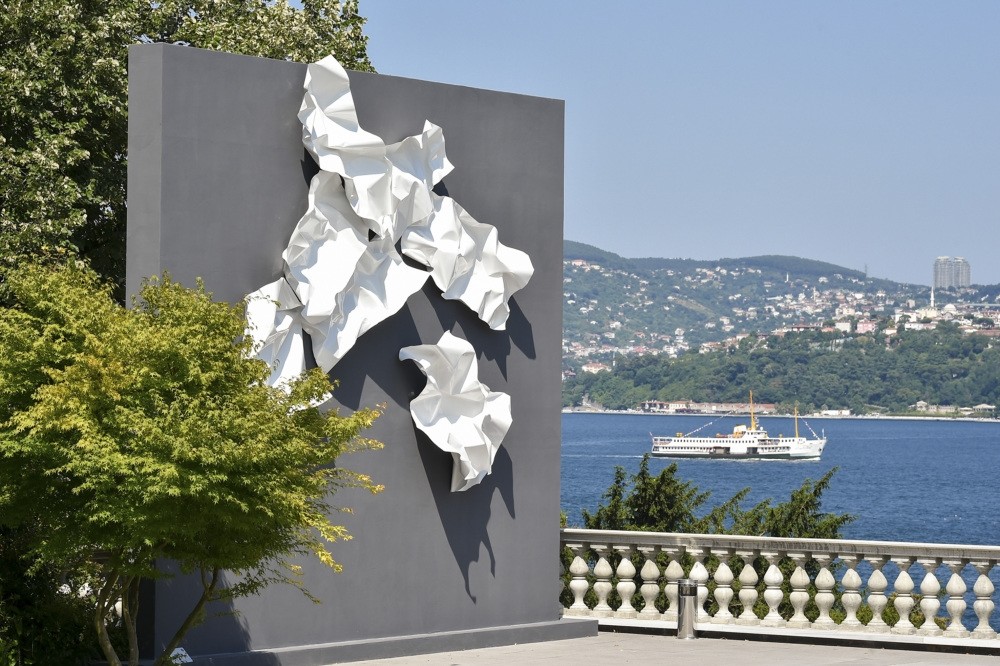 Produced by Seyhun Topuz, the sculpture was influenced by the work u201cBirds u2013 Abstract Composition,u201d by late artist Kuzgun Acar.
by daily sabah Jul 26, 2018 12:00 am

Sabancı University Sakıp Sabancı Museum (SSM) has on display a sculpture titled "Kuzgun Acar Anısına" (In the Memory of Kuzgun Acar), who has an important place in sculpture art in Turkey with her abstract, geometric works.

Produced by Seyhun Topuz, the sculpture was influenced by the work "Birds - Abstract Composition," by Acar, which was on display at SSM in 2016 after being repaired for the occasion of Acar's death anniversary.

SSM Director Dr. Nazan Ölçer said, "We, as SSM, are happy to exhibit Seyhun Topuz's arrangement on our terrace with Bosporus view. Kuzgun Acar's 'Birds - Abstract Composition,' was was put under protection by Istanbul Cultural Conscious Development Foundation for the purpose of restoration, after being removed from its place at Istanbul Haberdashery Center (İMÇ) in 2013 was exhibited in our museum in 2016 after its three-year restoration.

"Seyhun Topuz has produced her arrangement, inspired by this work of Acar, who is among the symbols of Istanbul. It is an honor for us to present the works of two precious artists who enable sculpture to communicate with people. We wish to continue to bring together important representatives of sculpture and art lovers to our museum every summer," said Ölçer.

Artist Topuz said, "I am really happy that my arrangement 'Kuzgun Acar Anısına' is on display at SSM's terrace, which hosted Acar's 'Birds - Abstract Composition' before. I produced this work, which I made with copper material on hard coal with a colorful wall, while enjoying and feeling a great respect for Acar. Spectators will find references to Kuzgun but it was shaped with the dynamism of my expressionist style."

Topuz's arrangement can be visited until Oct. 1.

Seyhun Topuz was born in Balıkesir province in 1942. Graduating from Hüseyin Gezer Workshop of Sculpture Department at the Fine Arts Academy of Istanbul State University - now known as Mimar Sinan Fine Arts University - in 1971, she worked as an academician at the same department in 1974.

Most of the solo exhibitions by Topuz, along with group exhibitions at home and abroad since 1972, are on display at Istanbul Maçka Art Gallery, Gallery Nev Istanbul and Gallery Nev Ankara. Topuz was among the participants of the first International Istanbul Modern Art Exhibitions, which later became the Istanbul Biennial.

In 1977, she got proficiency in art with her thesis "Transparency in Sculpture, Interior Light and Illusional Move." She started to work together with sculptor Jose de Creeft in New York the next year. In 1980, she held her own workshop in Ayaspaşa.

Opening 14 solo exhibitions to date, Topuz has received many awards including "Sculptor of the Year" (1980), "Aydın Doğan Award" (2008) and the "Honor Award" at the Sixth International EgeArt Art Days in 2015.

The artist's 42nd year in art was celebrated in 2013 with a comprehensive exhibition at Istanbul Elgiz Museum. Stating that we cannot add meaning to sculpture as much as paintings, even if there are some references, they are buried in the forms in sculpture, thus Topuz reveals abstract, geometric images instead of natural forms in her works. These works, which present new propositions about space, do not present an expressive manner but rather deal with turning a cognitive effort into form.