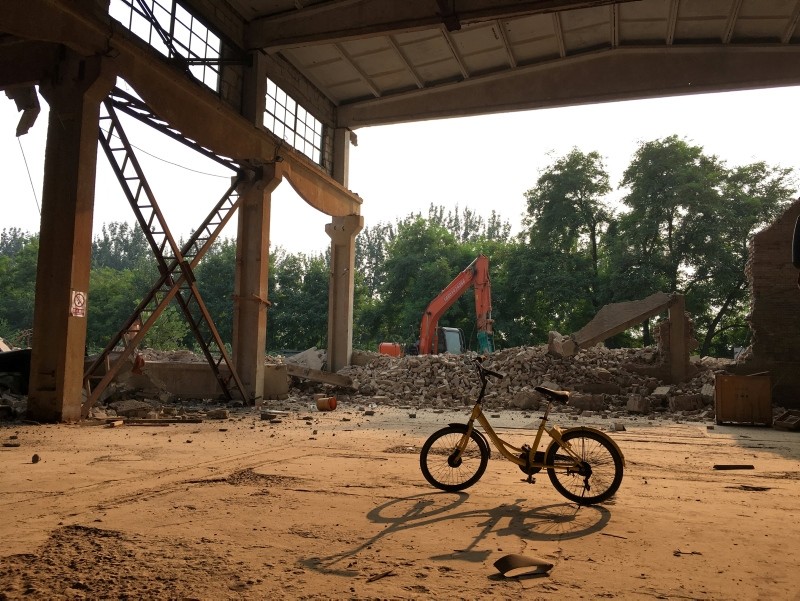 A shared bike is seen inside the demolished building, Chinese artist Ai Weiwei's ,Left and Right, art studio since 2006, next to an excavator, in the northeast Beijing suburbs, China August 4, 2018. (Reuters Photo)
by Compiled from Wire Services Aug 04, 2018 12:00 am

An excavator shattered the windows of Ai Weiwei's largest studio while workers hustled away his art on Friday, preparing to demolish the old Beijing factory three years after the artist and government critic left China.

As dusk descended on the old car parts factory on the outskirts of the capital, shirtless, sweating laborers packed large wooden crates filled with artworks onto a truck bed.

Hours earlier, Ai, who now lives in Berlin, had posted videos on Instagram showing several men looking on from inside the hollowed-out brick and concrete building as a backhoe went to work.

"Farewell," Ai wrote in English, saying the demolition had begun without notice.

Ai posted a series of videos Saturday showing the crews knocking down the interior and exterior, first breaking windows and then walls as the building turned into a pile of dust and rubble.

He described the building, named "Zouyou," as an "East German-style socialist factory building."

Ai helped to design the Bird's Nest Olympic Stadium for the 2008 Beijing Games, but fell out of favor following his criticism of Chinese leadership.

The artist was detained for 81 days in 2011 amid a crackdown on government critics. His passport was confiscated and he moved to Berlin after it was returned to him in 2015. He established a studio in Berlin, but in May announced his plans to move elsewhere.

It is Ai's second studio to be torn down by Chinese authorities after one was demolished in Shanghai in 2011 without warning.

Ai wasn't overly angry about the demolition, as the rental contract for the space had expired last autumn, said Ga Rang, an assistant who has worked for 10 years alongside the artist.

But it "simply wasn't possible" to move out at the time due to the vast quantity of things stored in the space, Ga said.

Ga managed the hangar-sized space in the Left Right Art District, where Ai had worked since 2006.

"They came and started knocking down the windows today without telling us beforehand. There's still so much stuff inside," said Ga, wiping his brow in the extreme summer humidity as he directed a crew of movers.

They had been warned that the move needed to happen within days, but had not been told when the wrecking machines would appear.

"The authorities say they want to develop things here, build malls and commercial buildings. But it's a shame -- you won't ever find a place in Beijing like this again," he said.

Around the back of the building lay a cemetery-like collection of different parts from Ai's various works, a ghostly outdoor retrospective.

Tall ceramic pillars in green, yellow and blue, like those from his 2006 "Pillar" series, stood next to twisted metal rebar reclaimed from schools destroyed in the devastating 2008 Sichuan earthquake, all encircled by a silent chorus of enormous, gnarled tree roots resembling those from his 2009 work "Rooted Upon" -- an abstract meditation on encroaching modernity and displacement.

It was going to be impossible to find another space to house such large-scale works in Beijing, Ga lamented, and they were considering simply storing the works outside somewhere.

"Mr. Ai made countless works in this space -- a lot of his iconic works were all made here."

Work from Ai's first solo show in his home country -- a reconstructed Ming dynasty temple, rebuilt with all its 1,500 parts in a Beijing gallery in 2015 -- stood packed up in boxes in the middle of the window-lined studio amid broken glass and timber.

It lies next to the "Big Wealthy Regal Industrial Park" -- an area full of tractors, dirty low-lying buildings and roadside watermelon vendors selling their wares for 20 cents a kilo.

Ai's studio dominates the complex, where many of the other buildings dating back to the 1960s and 70s have already been reduced to rubble.

Demolitions began three months ago, said De Aihua, a longtime resident who moved into the factory in her early teens.

Ai's studio used to be the state-owned factory's meeting hall, she explained.

At its peak, the complex was home to 1,000 residents, but numbers began to drop after China's reform in the 1980s shifted the economy away from rigid state-controlled planning. In recent years, only 20 or so residents remained.

She expected the government to allot her an apartment in a high-rise complex somewhere to compensate her for having to move, but deeply mourned the change.

"It was a wonderful life here. It was the way a life should be -- with neighbors, trees, closer to nature," she said, pulling her puppy Miaomiao through a leafy boulevard now overgrown with weeds and hedged on either side by debris.

She would speak with artists when they crossed her path, but didn't know much of Ai Weiwei's international renown, referring to him as "Ai Qing's son." His father was a famous Chinese poet.

As he prepared a jackhammer for the next morning, the young construction worker who would drive the demolition vehicle said he had no particular feelings about tearing down the historic building, but still preferred low houses to towering commercial malls.

In late July, several galleries in the area were told they were being evicted to make way for redevelopment, according to the New York- and London-based Art Newspaper.