From sprawl to expanse: Istanbul's art landscape at Large Meadow 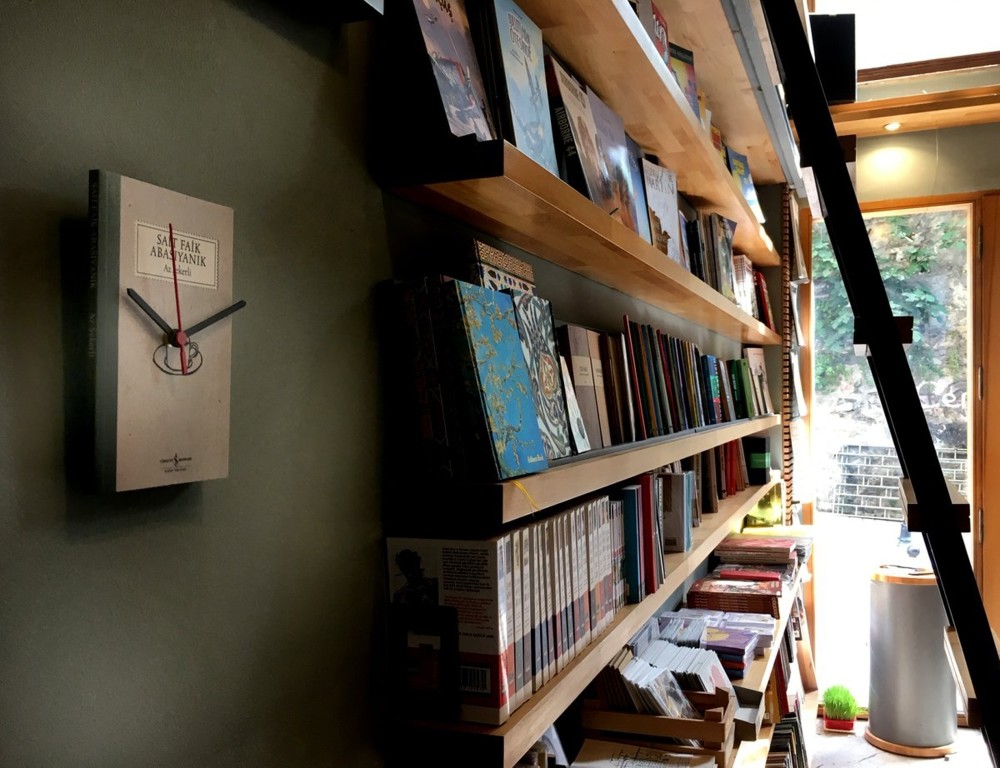 Organized by the art book publisher, Norgunk, a sleek outfit led by the power duo Alpagut and Ayşe Orhun Gültekin from its base in the underground gallery of Riverrun cafe, Large Meadow features 29 artists and collectives in 14 venues and media, transforming Istanbul's art landscape from sprawl to expanse

Sarkis, the elder statesman of Istanbul's contemporary art scene, is a wily trickster at Large Meadow, as he dots the conceptual field where his fellow artists exhibit, with his series titled, "12 Clocks for Large Meadow" (2018), that turn recently issued editions by the 20th century master of the Turkish short story, Sait Faik Abasıyanık, into time pieces that will grace the walls of select bookstores and galleries throughout Istanbul until the end of the project run on Sept. 15. It is in a gentle, lightly humorous fashion that his completely practical works are displayed. They express the fleeting rush of the summer season and the literary aesthetic of Norgunk while also paying homage to an artist of the word whose inspirations parallel that of his own, namely where immersion in French culture has bred particularly creative Turkish intellects. Sarkis has worked in Paris since 1964, and was only about 16 when Abasıyanık died, but they were both exposed to the bohemian lifestyle that France offered Abasıyanık when he studied in Grenoble in 1930, as the liberal spirit of the country endured well after the war to celebrate Sarkis and his interdisciplinary installations in its inner circles.

At the smart and well-stocked literature shop, Robinson Crusoe 389, housed inside both SALT research complexes, in Galata, on the street known for its banks, and the other in Beyoğlu district, in the thick of Istiklal Avenue, Sarkis makes his mark on Large Meadow. At the Galata store bookworms look out over the Golden Horn and pass under highbrow shelves only to find a new copy of "The Cloud in the Sky" (Havada Bulut) by Sait Faik ticking by the head of the patient, helpful cashier. The same is true in Beyoğlu, only his short story collection, "There is a Snake in Alemdağ" (Alemdağda Var Bir Yılan) hangs on the wall, its three hands orbiting a point at the center to mirror the earth's rotation against the sun. And from its new home in the storied back alleys around historic Pera, the young gallery Öktem Aykut hosts Sarkis, as a fresh copy of his "Unnecessary Man" (Lüzumsuz Adam) tells the time while lit prominently above the stairwell leading to the second floor, where, for Large Meadow, the artists Murat Akagündüz and Antonio Cosentino show works in the minimalist interior, entirely given to its concrete aesthetic.

Cosentino is appreciated for his elemental forms thoroughly driven by the muses of nature, where wind-whipped grasslands swirl into the cavernous groves of

some landlocked abstraction. His painterly drawings, and colored sketches overlap visual dissonances of urbanization and the wilderness with phantasmagoric vision, as he purifies the venturous seafaring wonderment of artistry steeped in his unique brand of the naive, stripped of over-educated artifice. Upstairs at Öktem Aykut Gallery, its Large Meadow show delights in his oil on canvas, "Cactus Four" (2017), picturing a surge of succulents in the style of cubistic impressionism, where the stand of cacti is painted as a patchwork of palettes. Only a single, circular form is left blank white, as to signify a celestial glow above the figurative plot of mixed earth tones and textures. His work is in like-minded company alongside the charcoal on paper series of seven pieces by Akagündüz shown at entrance level, where he details the faint intimacies of plant life with his refined skills as a naturalistic, postmodern draftsman. 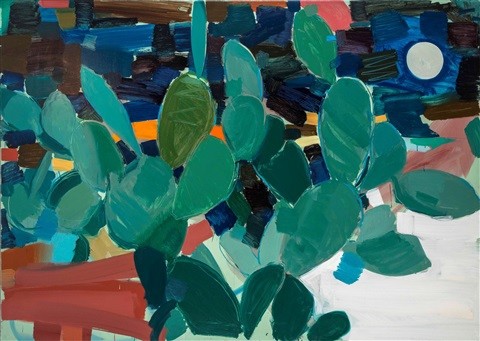 A chance meeting on the Large Meadow

Descending into the cooling, inner reaches of Istanbul's district of contrasts, Çukurcuma, where countless storefronts purvey antique collectibles next to contemporary art, MARSIstanbul preserves the refreshing air of an independent, cultural establishment not purposed for commercial ends. Pınar Öğrenci, its founder, director and often curator, is an accomplished international artist herself, who once set up her old architectural research station to spotlight provocative creativity, since screening untold numbers of powerful video works from around the world in her subterranean hall, where a smiling, enthusiastic guide named Suphi greets passersby on the lookout for the curiosities of Large Meadow. Its unfinished setting props up a Sarkis clock in the form of the book "Cistern" (Sarnıç) by Sait Faik, posted for art lovers to remember the hour as they delve into boundless spaces of expressive potential where time is not of the essence. "AS] IN" by the transdisciplinary Peter Downsbrough projects against the plain, smooth stone of the basement gallery, as the work teems with the peculiar visual vocabulary that has gained the artist prominent international recognition since the 1960s, training his constructivist, sculptural movements from an empty corporate tower with a view to a superhighway spliced by the window frames. Suphi, a conversational, self-taught Francophone with an itch to see the greater world, watches the 10-minute, black-and-white segment before leading eyes to six still photographs by Downsbrough, which distill his singular talents for cinematographic composition despite the apparent meaninglessness of his subjects, a pile of wood, a city intersection.

Not easing his grin in the least, the bright and optimistic Suphi then prompts the wayfarers on his path to press on, specially praising Ark Kültür, for the unprecedented work of its nine exhibited artists, the most among the Large Meadow venues.

Around the corner from one of the main drags in Cihangir, where Istanbul's footsore come to take a break and gaze out to the horizon beyond the Sea of Marmara, there is a lush gate of leaves and vines, hung with vinous green climbers so much as to almost obscure any recognizable signage for Ark Kültür, a most upstanding operation in the business where style, craft and ideas merge into public manifestations of true novelty. Karin Sander contributed what is likely the first visible work, "Kitchen Pieces" (2011/2018), an amusing variety of fresh vegetables nailed to the wall. Its absurdity is comparable to the installation one floor up, titled, "The Garden" by Derya Yıldız, which to the average eye would simply look like some boxes with sand in them. Through a doorway on the upper level, a more redeeming piece is called "Ups" (2018) by Özlem Günyol and Mustafa Kunt, who placed decorative flanges in various dimensions in the form of multicolored poles that have a fantastical effect on the eye, displacing obvious environmental consciousness with imaginative color.

The seasoned contemporaries Selim Birsel and Ayşe Erkmen unsettle the dust below ground at Ark Kültür with two 3-plus minute videos. Birsel's piece, "And they've heard the mermaids" (2006) is a hypnotic treatise on the mortality of a half-sunken moored boat in a grainy, achromatic ambiance, while Erkmen's work is a collagist interpretation of films, titled "A Path" (2009) utilizing a clip from the American indie film classic "Mystery Train" by Jim Jarmusch.

An interview with Large Meadow

"It is hard to say that Large Meadow has a specific goal or that it is shaped around a certain mission," wrote Ayşe Idil in recent personal correspondence on behalf of Norgunk and Large Meadow, in direct collaboration with Ayşe Orhun Gültekin, who walked into Riverrun gallery on a hot weekday while visitors enjoyed breathtaking photography by Silva Bingaz one story above a scintillating mixed media installation by Lara Ögel. "One could only talk about what it is curious about, what it wants to try and experience together. Large Meadow asks: 1.) 'Is it possible to activate the arts environment and venues during summertime, in August, when the city empties out and is especially stagnant in terms of contemporary art events? 2.) Can artists, collectives, alternative art spaces come together and produce a contemporary art event without sponsors, logos, or billboards? 3.) Is it really as hard as we are told to create, produce, and construct outlets of production, of sharing, and of independent discussions?'"

"One can be misled by the name, however Large Meadow does not reference nature directly, it is not a call towards nature," wrote Idil. "It is more about the secondary nature that is found within us, about the disabled nature of nature that is forced upon us, than our relationship with it. Yet the greatest damage is to our relationship with time: we have lost our times, unable to see or weigh, accept our differences. Large Meadow is a call to think and discuss when to speed up and slow down in nature and the city, instead of the predictable call towards it. That is why these alternative spaces were lent to Norgunk Publishing for this inaugural gathering. Contemporary art is a pulsation forward and backward. It is open to every element, every technique, concept, and medium. This first meeting brings together 29 artists and collectives, the next one with different artists, different ideas, and different compilation of vibrations."