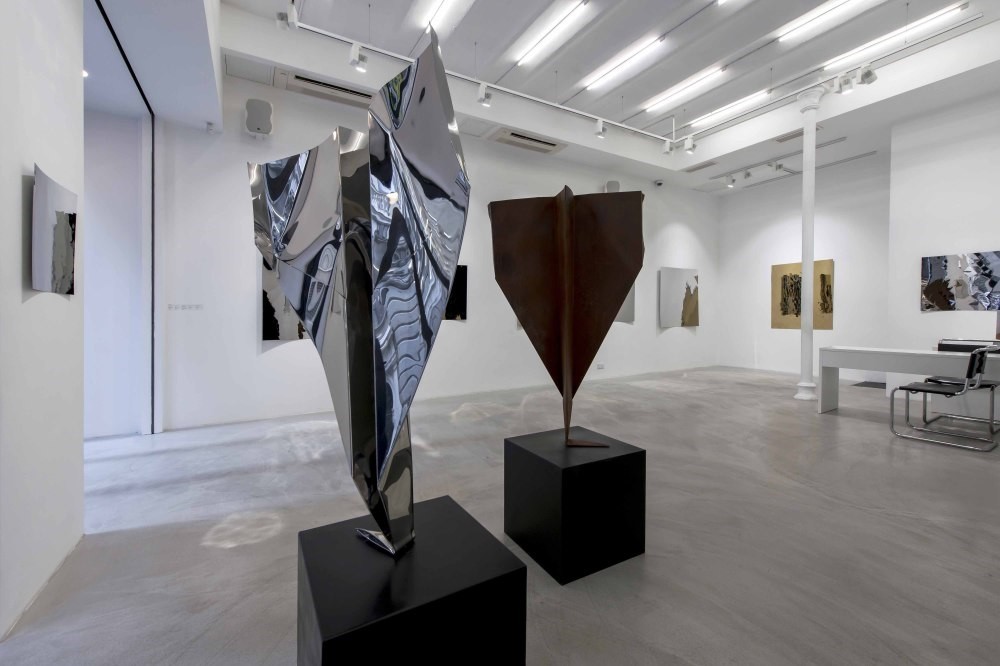 Istanbul's Anna Laudel Contemporary is showcasing "Empires Ago" by the Italian artist Daniele Sigalot who is well-known for his unique large-scale installations and unconventional mosaics.

The exhibition opened on Sept. 13 and is being held across three floors of exhibition space at Anna Laudel Contemporary until Oct. 26. The show runs parallel to the 4th Istanbul Design Biennial, which is organized by the Istanbul Foundation for Culture and Arts (İKSV) and runs from Sept. 22 to Nov. 4.

Sigalot is known for his innovative use of different materials and interdisciplinary techniques, and with "Empires Ago" he will show work that has been produced in Istanbul along with other recent work.

Sigalot is famous for his large installations of aircraft that look like they're paper planes but are actually made of aluminum.

The artist enjoys playing with the ambiguity between the perception of materials used and their real nature, aiming to create contrast, which is key in his artworks. He investigates contradictions, irony, the ambivalence of both words and materials and produces works full of surprises and alienation, which also reflect the emotions of our times.

"Empires Ago" takes its inspiration from the Roman and the Ottoman Empires. Sigalot is from Rome and he grew up in a city which still lives under the legend of the empire. He finds the impact of the Ottoman Empire on Istanbul similar to the one he experienced in Rome: both cities used to be the capital of an empire and were very powerful, and both empires disappeared long ago, yet Italians and Turks still have pride in their empires.

Sigalot created a series of stainless steel maps of Istanbul and Rome. The maps have a mirror effect, reflecting the faces of the viewer within the views from the past and present.

Sigalot has been working from his temporary studio in Istanbul for the last two months and is now presenting his works that have been produced here.

One of these works is a large-scale installation titled "Everything That Could Have Been but Wasn't, Now Is" which the artist describes as a "redemption" process that turns bad ideas into good ones.

Sigalot enjoys creating contrasting emotions and using prolific techniques. For this exhibition, he produced a new installation piece made up of an unconventional material.

The exhibition also showcases recent works of the artist including his artistic trademark: 140 paper planes made from stainless steel and rusty iron, along with an installation titled "Enough," which is a countdown timer that will last 1,000 years showing that installations can challenge time, just as much as paintings.

Using a wide range of materials and mediums: ranging from cardboard to aluminum, from mosaic to digital displays, from drawing to painting, "Empires Ago" brings together more than 30 artworks by Sigalot with his unique techniques reflecting today's contrasting emotions.