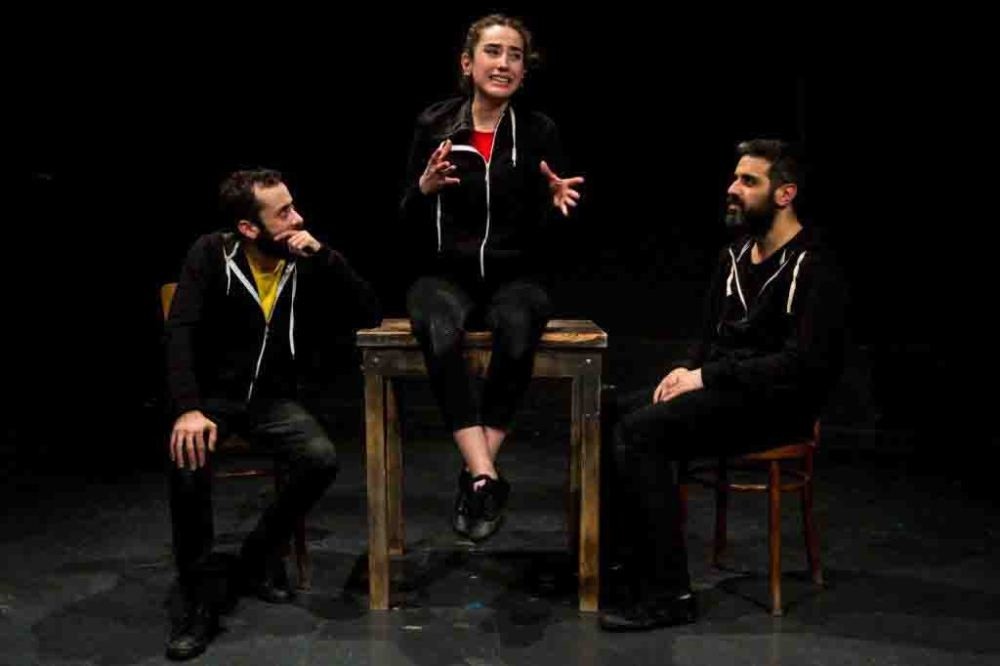 The play welcomes audiences as a classic documentary theater play witn a bitter, harsh satire, and reenacts the homicides of the NSU and dares to estimate the end of the suit.
by Daily Sabah Oct 10, 2018 12:00 am

Written and directed by Tuğsal Moğul, the theater play "NSU/Kurbanlar Arasında Almanlar da Vardı" ("NSU/ There were Germans among the victims"), which is staged in collaboration with the Tarabya Culture Academy, Goethe-Institut Istanbul and Kumbaracı50, will be performed at Kumbaracı50 for the last time on Oct. 13.

The far-right German group National Socialist Underground (NSU) had carried out two bombings, 15 armed robberies and killed 10 people, of whom nine were of Greek and Turkish origin. Their criminal actions ended in 2011 when two members of the group, Uwe Böhnhardt and Uwe Mundlos, were found dead in a totally-burned caravan. Soon after, another member Beate Zschape surrendered to the police.

The group was later tried in what became the biggest political and criminal lawsuit after the German unification. The trial went on for five years with more than 400 hearings. Each hearing cost around 150,000 euros. The longer the suit went on, the more disruptive and dark incident during the unification period came to light. It had been assumed for years that the victims were linked to organized crimes. Besides, the German police did not accept that homicides could be committed with rightist motives. What if the victims were Germans and the criminals had foreign names?

Tuğsal Moğul collected data, testimonies, police reports and the statement of politicians about the right-wing extremist incidents in general and about the NSU members in particular. The show, which uses different methods, welcomes you to a classic documentary theater play or as a bitter and harsh satire, reenacts the homicides of the terror organization and dares to estimate the end of the suit, turns it into a theatrical mourning prayer and asks all of us: How did things come to this point and what was the share of each person in this?

"NSU/ There were Germans among the victims" premiered at the Theater Münster in 2015. The play was invited to Theater Writers Days in Deutsches Theater Berlin. It was also performed at Heidelberg Stückemarkt Theater Festival, Made in Germany Stuttgart and Unbekannte Nachbarn Zwickau. It was considered worthy of the 2016 Monica Bleibtreu Award in the category of Best Modern Drama and broadcasted like a radio theater at WDR-Mediathek. It has been staged in different theaters across Germany.

Tuğsal Moğul was born in Neubeckum in 1969. Moğul, an actor, director, anesthetist and doctor, was educated at Hannover University of Music, Drama and Media along with nine-year medical education at universities in Hannover, Lübeck and Vienna.

While working as a part-time doctor at a teaching hospital in Münster, he also continued his works as a director and author. He was invited to Heidelberger Stückemarkt Theater Festival with his "Halbstarke Halbgötter" ("Half-strong Demigods") in 2011. While doctors speak at this play and patients at the intensive care unit take the floor at "Somnia," we witness the speech of relatives of patients at "Die Angehörigen" ("The Members"). This trilogy is performed by a theater community named Operation.

Moğul's "Die deutsche Ayşe" ("German Ayşe") premiered at Theater Münster. The play was staged many times within the 2014 NRW Theater Days and was invited to the "Talking About Borders Festival" in "Nuremberg and Made in Germany" in Stuttgart.

Other works of Moğul have been performed at many theaters, such as Ballhaus Naunynstrasse in Berlin, Glocksee in Hannover and Theaterhaus in Stuttgart. The author worked as a scholarship artist at Tarabya Culture Academy between 2017 and 2018.