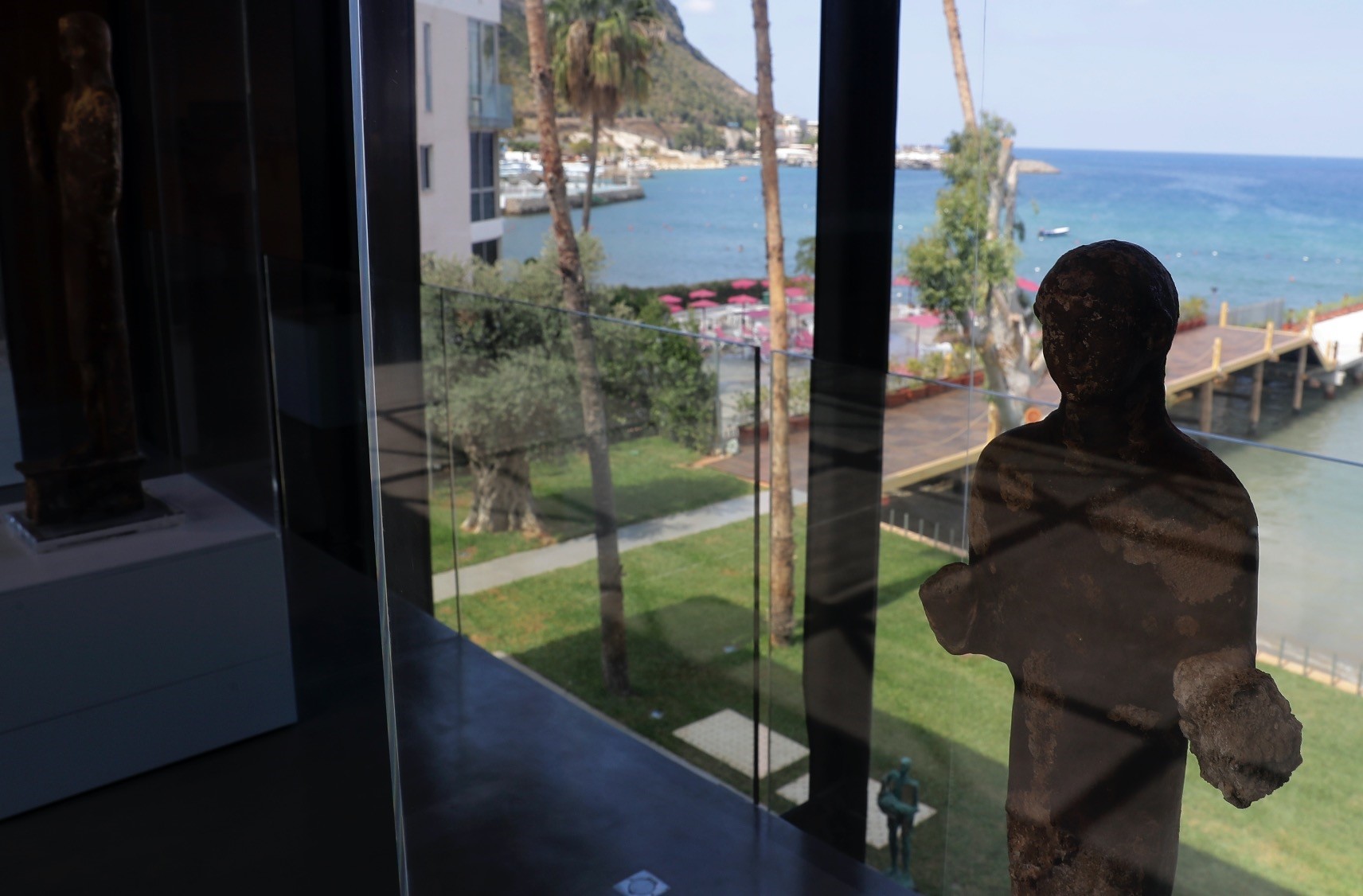 A view of Lebanon's Nabu Museum overlooking the Mediterranean Sea in the village of el-Heri.
by Oct 15, 2018 12:00 am

At a new private museum in Lebanon, a contemporary sculpture of a mortar missile is displayed alongside millennia-old statues retrieved from the bottom of the sea.

Named after the Mesopotamian god of wisdom, the Nabu Museum opened in late September to showcase the cultural wealth of an ancient region devastated by conflict.

Its inaugural exhibition includes 60 contemporary works, as well as around 400 antiquities from Lebanon, Iraq, Syria, Egypt and Yemen.

"We have a more or less complete picture of what was once the cradle of civilization," says French curator Pascal Odille.

Next to a private beach in the village of El-Heri in Lebanon's north, the museum's collection sits in an impressive futuristic cube of steel, coated with a rusty orange patina.

A tall glass opening in the metal and concrete structure provides a view straight through the museum's interior and out to the sea.

Designed by Iraqi artists, the museum for the first time opens up the private art and antiquities collections of wealthy businessmen to the public for free. Drawn from the homes and warehouses of its patrons, the exhibits are displayed on two floors, floodlit by the sunlight streaming through the tall windows.

There are "ushabti" from Ancient Egypt, finely carved turquoise figurines traditionally placed in coffins to ensure passage to the afterlife.

Nearby, a contemporary sculpture of a mortar missile by Lebanese artist Katya Traboulsi is adorned with hieroglyphs.

The artwork is topped by a sculpted bust of the Ancient Egyptian god of the sky, Horus, instead of a warhead.

But they can also admire terracotta statues harking back to the Phoenician period found during marine excavations off the southern coast of Lebanon.

"You can see the seashell and limescale deposits on them," says Odille, of the figures from the sixth or seventh century BC.

But the works on show only represent a fraction of its founders' private collections, and there are plans to switch the exhibits every few months.

Lebanese co-founder Jawad Adra's personal collection includes 2,000 items from the Levant and Mesopotamia regions, according to the exhibition's catalog. "I've been collecting stamps and coins since I was 10," says Adra, who now heads a Beirut-based polling company and owns quality control labs in the Gulf. To set up the museum, he banded together with Syrian business partner Fida Jdeed, and fellow Lebanese entrepreneur Badr El-Hage, who runs a rare book firm in London.

"We've all reached an age where we're starting to ask ourselves, 'What have you done? What have you given your country?'," he says. Lebanon's interior minister recently attended an evening inauguration ceremony at the Nabu Museum.

In Lebanon, a 2016 law demands all private owners of antiquities register their items with the ministry as part of its efforts to combat illegal trafficking.

Adra says that "a large part" of his collection has been declared to the authorities, and he is registering the rest.

In recent years, part of the region's cultural heritage has been damaged, destroyed or looted by armed groups. The Daesh group in particular swept across large parts of Syria and neighboring Iraq in 2014, wrecking countless historical sites in territory it controlled.

Mahmud Al-Obaidi, who designed the museum building with fellow Iraqi artist Dia Azzawi, sees the project as compensation for years of loss.

With governments in the region busy battling troubled economies and poverty, personal initiatives are key to preserving culture, he says.