Rembrandt's 'The Night Watch' painting to be publicly restored 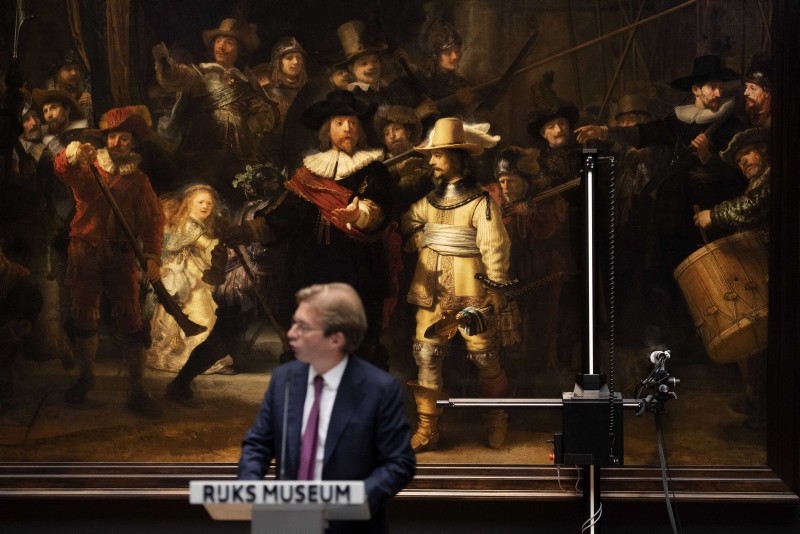 Director Taco Dibbits of the Rijksmuseum announces that De Nachtwacht (the Night Watch) of Dutch painter Rembrandt will be restored in 2019 in front of the public, Amsterdam, the Netherlands, 16 October 2018. (EPA Photo)
by French Press Agency - AFP
Oct 16, 2018 12:00 am

One of Rembrandt Harmenszoon van Rijn's most spectacular paintings, The Night Watch, is set to be restored in the public eye at the Rijksmuseum in Amsterdam, its general director said Tuesday.

The unique project starting in July 2019 will let art lovers see behind the normally secretive process as the Dutch master's 1642 tableau is brought back to its full glory.

"The Night Watch by Rembrandt is one of the most famous paintings in the world and we feel we have to preserve it for future generations," Rijksmuseum General Director Taco Dibbits told AFP.

"Over 2 million people a year come to see The Night Watch, it's a painting that everybody loves, and we feel that the world has the right to see what we will do with it."

The last major restoration work was carried out 40 years ago after a mentally ill man slashed the painting with a knife.

Since then experts have noticed a white haze appear on parts of "The Night Watch," especially in the area around the knife damage, where it is bleaching out the figure of a small dog.

The restoration, billed as the biggest in the Rijksmuseum's history, will be carried out behind a huge glass case so that visitors to the museum in the capital of the Netherlands can see experts carry out their painstaking work.

But the regeneration of the piece, which hangs in the museum's "Gallery of Honour," will also be live-streamed on the internet so people around the world can see it be restored inch by inch.

"Conservation is usually done behind closed doors, but this is such an important painting, we feel that the public who owns it has the right to see it and we want to share this very important moment," Dibbits said.

Rembrandt Van Rijn was commissioned in 1642 by the mayor and leader of the civic guard of Amsterdam, Frans Banninck Cocq, to paint the picture of the officers and other members of the militia heading out on The Night Watch.

Over the last three and a half centuries the painting has endured several moves, restoration attempts and even an escape from the Nazis.

In the 1700s the painting had large chunks cut from each side during a move to Amsterdam Town Hall, followed by the clearing of "multiple layers of boiled oil and varnishes".

A century later "The Night Watch" underwent a series of attempts to "regenerate" the varnish and remove its yellowish tint.

Then in September 1939 the painting was evacuated from the Rijksmuseum along with 30,000 other artworks as Nazi Germany closed in. When it was returned from its last hiding place in a cave in Maastricht in the southern Netherlands in 1945 it needed major restoration.

The painting's travails were not over: the 1975 attack saw a disturbed man slash the painting 12 times, with the marks of the deepest cuts still being visible today.

The museum decided to carry out a major restoration then, only to see a man spray acid on it in 1990.

"We noticed that over the past years there's a white glare that appeared on the bottom part of the painting. We want to be able to understand what that is," said Dibbits.

Restoring "The Night Watch" will not be cheap, or quick, however.

"That will cost several millions," said Dibbits, adding that the museum would also be looking for private funding. "I'm very confident people will want to contribute to it because we all want to restore it for future generations."

After several months of research, "The Night Watch" will be the centerpiece of an exhibition marking the 350th anniversary of Rembrandt's death starting in February 2019, before restoration work begins in full in July.

"As we say in Dutch, conserving paintings is a monk's job, it takes a lot of patience, so it might be several years," said Dibbits.