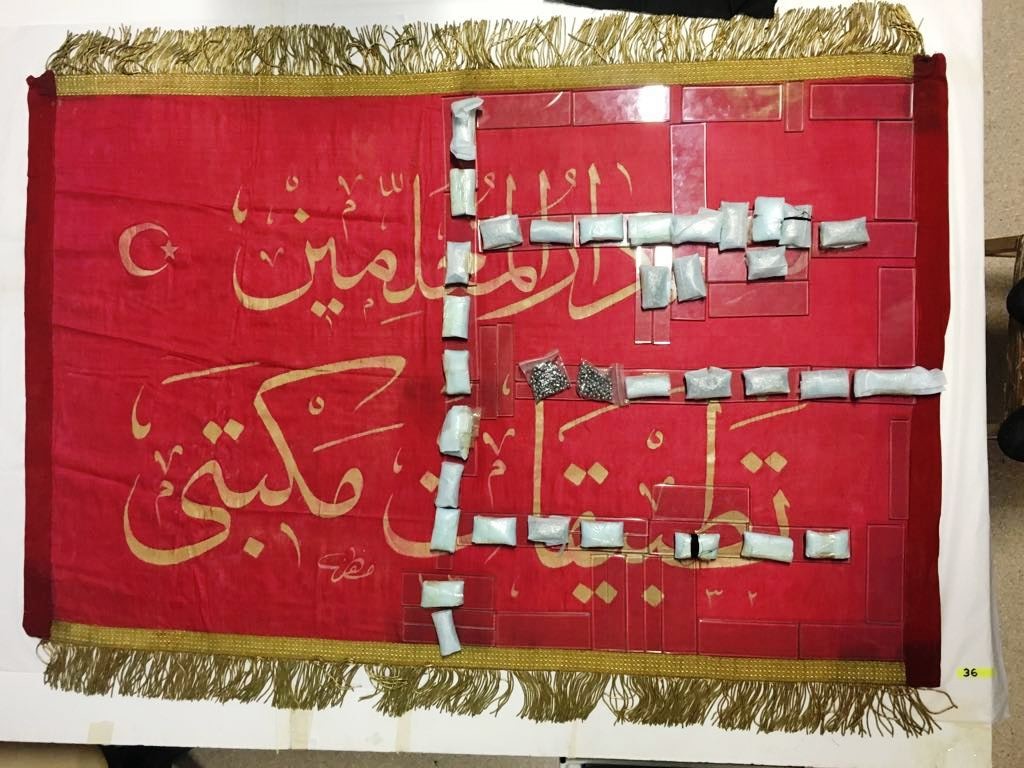 A conservation atelier based in Turkey's Bursa province, where sacred relics such as the 500 year-old Kiswah (the cloth that covers the Kaaba) and the tomb cloth of Sultan Murad I (or Murad Hudavendigar) that dates back to the 18th century, allows historic and cultural values to be preserved for future generations.

Bursa Metropolitan Municipality announced that conservation work was undertaken to prolong the life of historical materials such as age-worn cloths used by the saints of the past, tomb cloths and the Kiswah. Many of these relics were kept at the storehouses of old monuments such as mosques, madrassahs, khans and Ottoman social complexes throughout time.

Shown as the significant and political proof of Egypt's conquest by Sultan Selim I in 1517 and the Ottomans' taking the caliphate from the Memlukes, the 500 year-old Kiswah - which was granted to Bursa's Grand Mosque by Sultan Selim - was cleaned meticulously via a conservation laser device and has not been touched by human hands at this atelier.

Dating back to the 18th century, the golden filigree cloth on the tomb of Sultan Selim I is also among the sacred relics at the conservation atelier.

The corrosion of time on the cloth was cleaned up with a laser device by İnan. The tomb cloth restored to its original version will be displayed on a special showcase at the Quran and Calligraphy Museum.

The golden filigree tomb cloth of Sultan Murad I

Stating that they mostly work on textile pieces that will be exhibited at the Metropolitan Municipality Museum, conservator Levent İnan said, "The conservation atelier in Bursa stands as an example for Turkey as it is the only atelier in the country that works on such pieces. For now, as the two conservators of the atelier, we work on pieces dating back to 400-500 years and we conduct the work without using chemicals. This is called passive conservation. The artifacts are generally handed to in us in a package or carrier bag. Most of the time we do not have an idea about the piece presented to us in such form. The golden filigree cloth that covers the tomb of Sultan Murad I was so age-worn. As the doors of the tomb are open most of the time, the cloth is easily exposed to moisture and outer effects. As the cloth is made of delicate stuff, it easily gets worn out. Therefore, we had to apply laser technology to get rid of the corrosion on some parts as they were extraordinarily worn. Now, it can be easily exhibited at the Quran and Calligraphy Museum without losing its original form for [many] years."

Bursa Metropolitan Municipality Mayor Alinur Aktaş also visited the conversation atelier to witness the work on site. Informed by conservator İnan, Aktaş said, "At the conservation atelier, we shed light on the centuries-old sacred relics after a restoration process conducted in fidelity. The restoration of historic relics is conducted with laser devices, untouched by human hands and with great meticulousness. The artifacts that reveal history are taken into a room with a constant temperature [21-22 degrees centigrade] and constant humidity [40 to 50 percent] after the conservation process. As the municipality, we work to add these artifacts into the memory of Bursa. There are Kiswahs, Sakal-ı Sherif [hair from the beard of the Prophet Muhammad] packages, embroidered velvet prayer rugs, various relics from the ancestors and centuries old Quran manuscripts among these artifacts. Sultan Murad I's golden filigree tomb cloth is also one of them. We work to show these artifacts to future generations without distorting their unique forms. "