Heart and soul of the Peloponnese: This is Sparti! 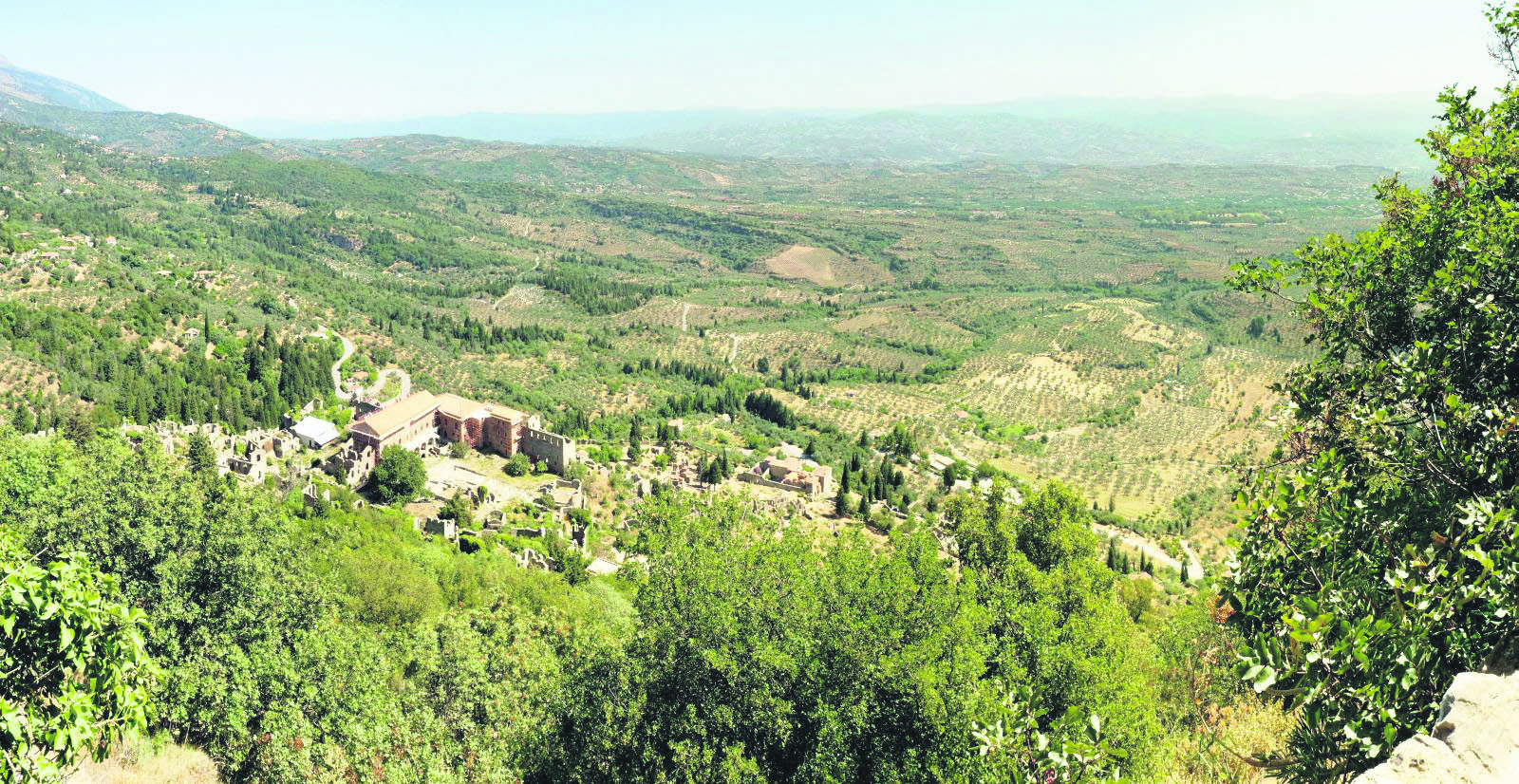 Ancient Greek history was marked by the rivalry of two of its most important cities: Athens and Sparta. While Athens has retained its place in travelers' itinerary as the epitome of Greek culture, Sparta remains a quieter town that still has much to offer for those interested in Hellenic and Byzantine cultures

My bus from Athens arrives an hour earlier than I expect. Before I know it, we are crossing the Eurotas River, and my fellow passengers are all looking intently out the windows. I put down my Homer and follow suit to see that several people in proper marathon clothing are heading into the river from the olive groves, with another group of people cheering them on. I then remember what my B&B host had said in a message: It was the weekend of the Spartan races, and so it was difficult to find a room in the town.

This is an apt welcome indeed, as the Spartans were, and still are, known for sports and military training and because of the 2006 film "300." When I arrive at the B&B, my host tells me to go to the town square so I might catch some of the athletes coming to the finish line. I make my way through streets that remind me much of Tire, my mother's hometown. Only, the main street is named Paleologo, after the last Byzantine Emperor of Istanbul. In Sparti, like elsewhere in Greece, all names are hyperlinks that take you to other places and times, and for a Turk, these are always close to home.

Midway on the Paleologo I see an inflatable gateway that says, "This is Sparta!" welcoming the athletes who have spent the whole day in the brooks and hills surrounding the town on an endurance course, which, according to what I see in the giant screen in the square, involves wading through rivers, carrying heavy weights around you while running and shooting arrows whilst in water. And you can imagine the state the heroes and heroines who have done the whole thing and who are now back in town were in. Many were broken, some in tears, but there was a palpable sense of euphoria; the town seemed to be basking in a cloud of adrenaline. Some t-shirts revealed that these trifecta races had been popular with the northern races - Scandinavian and German city names were prominent - but that in 2018, it had finally come home to Sparta, you know, a town that could defeat the army of the Persians with only 300 of its men. (Before you start thinking that the races are an ancient tradition, let me tell you they started in 2004) It is good, no doubt, that the emphasis on Sparta being a town for muscular prowess has brought the games here, but naturally the town wants to be equally known for its cultural heritage, as was evidenced by the conversation I had with my B&B host. As he reminded me, a 10-minute drive to the west will take you to the Byzantine town of Mystras, and a 10-minute drive to the east will take you to the Menelaion, the site of the palace of Menelaus, Helen's jilted husband.

The new town of Sparti is located at the skirts of the old Spartan Acropolis, with majestic Peloponnesian ranges on both sides. The Acropolis boasts of the remains of a basilica and a sizable amphitheater half of which has been eaten by grass. The site is surrounded by olive groves where the harvest is in progress. I see some British tourists discussing Merkel and Brexit, and swiftly move away. On a stone bordering the olive grove, I can just make out the word Lacedaemonia with my very rusty Greek: This is another name for Sparta that means "lake of demons." I feel it's a town that earns its name because the Hellenic, the Byzantine, the Ottoman and the Modern Greek periods are all here to see. 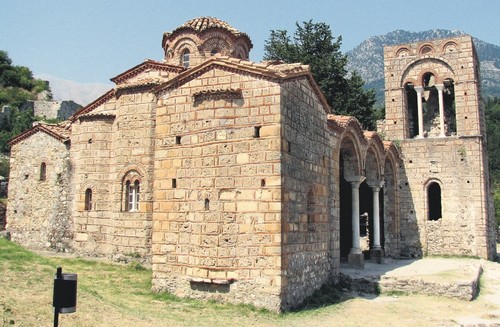 Under the olive trees in the Acropolis I sit and read on the grass that looks like it is spring rather than autumn. Telemachus is seeking news about his father in "the sunny hills of Lacedaemon," and the mist plays light games with the olive trees and the mountains behind. Helen, after her scandalous life, is back with Menelaus, and is as domestic as any Mediterranean housewife you can hope to meet. This, then, is where Paris stole Helen from, and this again is where she has returned. My B&B host's friend has agreed to take me to the Meneliaon, but first, we have to drop another passenger in a nearby village. "Turkish" he says pointing to a nicely renovated stone house right across from where we have dropped the old lady. "Who lives there now?" I ask. "America," he answers. After a short while, we leave the "asphalt" as I am glad to discover the Greeks call it too and go up a hill studded with olive trees. The road is a little wider than a donkey track, and I see further people harvesting olives, and trucks making way for us. Only parts of a mausoleum remain from the Menelaus complex, nothing to suggest "a radiance strong as the moon or the rising sun came flooding through the high-roofed halls." But then again, at this altitude all kinds of flowers we try hard to nurse in our urban homes seem to spring from every crevice. And the view towards Mystras is mesmerizing.

As a good Constantinopolitan I am naturally drawn to Mystras, referred to in several texts as "little Constantinople." The guidebook puts Mystras in the top 30 things to see in Greece, and advises the visitor to start their course from the upper entrance. Mystras is a fortified Byzantine town sprawled over a hill of some 300 meters. Imagine the monastery of Sümela in Trabzon, but that there is not just Sümela but a whole city, like Ephesus, that goes all the way down to sea level. When the taxi drops me off at the summit, the cobbled pathway that takes me to the city gates is as idyllic as anything in Turkey's Black Sea region. The green is deeper than one is accustomed to in the Aegean. There's birdsong, and sheep's bells in the distance. To top it all, there is a symphony of herb scents and even jasmine. It's 10 o'clock in the morning, I am alone on the site: It feels almost like a mystical experience, and this is even before I visit the churches! 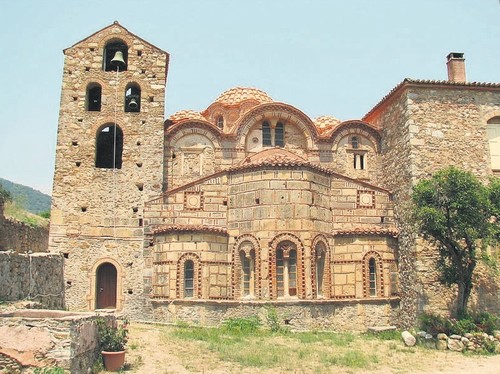 Metropolis Church in the middle of the town.

I walk up to the upper castle battlements. It is quite a trek for someone who hasn't exercised in a while, so I take my time, looking down at Mystras and Sparta beyond. Every corner offers another beautiful angle through which to view Mystras, with its familiar small domes, red tile and stonework. The churches and houses play hide and seek with you as you catch glimpses of them through the trees round one corner, and then completely lose them when you turn the next. It feels, at times, like a CGI produced model of Istanbul. This is, you imagine, what Fatih district in Istanbul must have looked like say, six centuries ago. When I reach the upper castle, I see people with Spartan race t-shirts. "This is like the third day of the endurance course," I tell them as I catch my breath. They smile and say "Yeah, well not quite," and make me promise that I will join them next year when the races return to Sparti.

The signage and the explanatory texts in Mystras make sure that you always have Istanbul on your mind; they provide plans of Byzantine Istanbul to compare with the way Mystras is planned out. In the beautiful Agia Sofia, I hear a French guide explain to Japanese tourists: "This, of course, is much smaller than the one in Istanbul and doesn't have the mosaics." In Mystras, I constantly check my privilege of being a Constantinopolitan. Nowhere is my cultural capital legal tender as it is in Greece: I come from "i poli," "the" city after which all cities are modeled. Just as I recognize the many Byzantine features in Mystras, I feel Mystras recognizes me. It takes me five hours to walk from the summit to the lower entrance, picnicking (you're advised to bring your own provisions with you), praying, sketching and simply looking at the stupendous views. Near the Metropolis church, I discover blackberries and feast on them as my desert. When I come out of the church, a few meters away I discover two walnuts that have dropped on the step stones beneath - I take a small rock and crack them open - delicious mountain flavor! I imagine making my home in Mystras, foraging for my dinner, having my pick of the many abandoned mansions as my lodging, and call myself Queen of Little Constantinople.