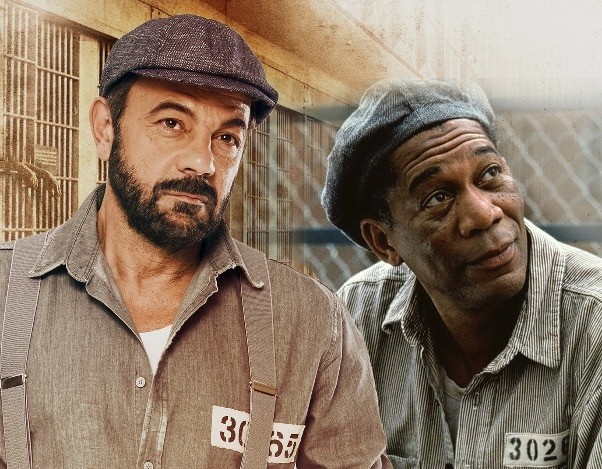 The play, directed by Şakir Gürzumar, will star Kerem Alışık, Kaan Taşaner and İştar Gökseven in the leading roles. Alışık will play the character Red, which was portrayed by Morgan Freeman in the film, while Taşaner will play the other leading role, Andy. The complete cast will feature 25 people.

Rehearsals for the play that will be staged at the Zorlu Performing Arts Center (PSM) on Dec. 15 continue at full speed.

Alışık worked with renowned photographer Levent Özdemir for the play's poster. "I watched 'The Shawshank Redemption' many times. But I was amazed by it every time I saw it. I never thought I would play Red one day," Alışık said.

"The play will be staged for the first time in Turkey. Apart from that, it is a great thrill for me to portray a character that was originally played by someone like Morgan Freeman. The play, which shows the tranquility of Red, can be seen as a conflict between Andy, who says 'Hope is a good thing, maybe the best of things, and no good thing ever dies,' and Red, who says, 'Hope is a dangerous thing. Hope can drive a man insane. It's got no use on the inside.' In the end, it's a story where hope is fermented, and hopelessness gets tarred. We are hopeful about the play, as well. All our preparations are almost finished. All our hope is that we will perform the play in the future."

Andy Dufresne is wrongfully sentenced to two consecutive life sentences at the Shawshank State Penitentiary for murdering his wife and her lover. There he is befriended by Red, an old convict who has spent many years in prison. Although Red thinks that Andy will give in easily because of the prison conditions, Andy proves to be very resilient. He clings to life and is hopeful every time in spite of the beating, torture, rape and all the other pains in Shawshank.

He convinces the convicts around him with his perspective, makes them believe that there can be a free life even behind bars. Andy Dufresne is maybe the proof that patience, intelligence, knowledge and hope can overcome all difficulties in life.