The art of the poem: gravitational pull at Halka art 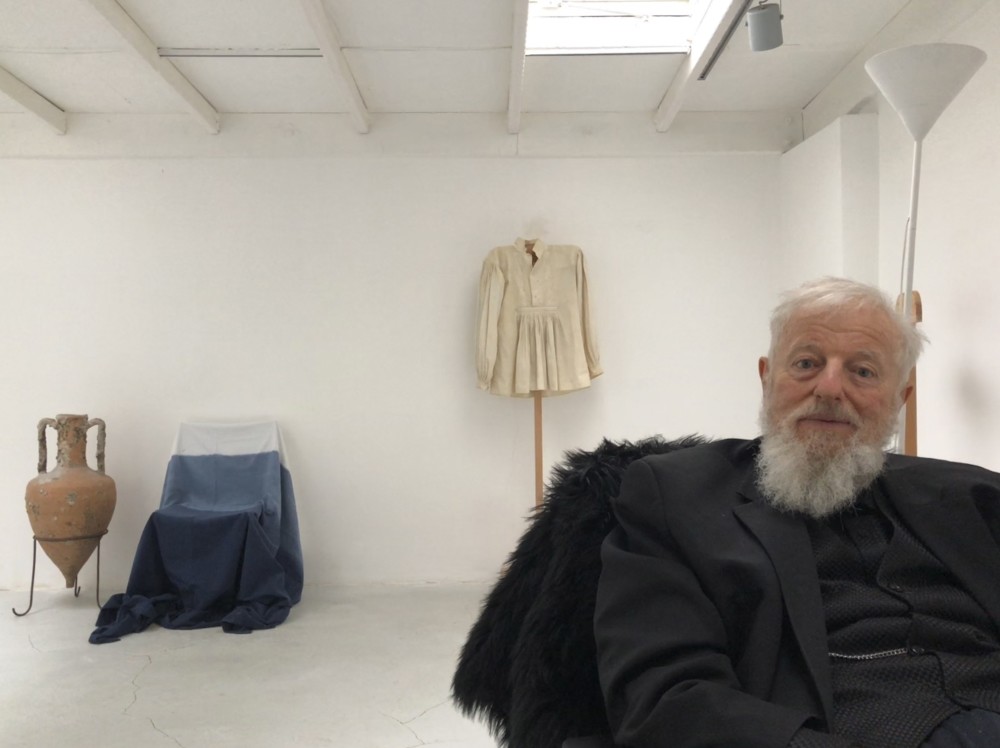 In an Armenian century home in the midst of Istanbul's hippest district of Moda in Kadıköy, across from an artisan bakery cafe purveying vegan fare, Halka Sanat is a modest outfit for contemporary art currently exhibiting ‘Poem as the Gravity Pull,' where eight artists respond to verses of Şirin Tufan

Shafts of soft, natural light beam in through frosted glass windows. Floating dust particles are visible, wafting in the still, indoor air. The sun-rays warm the fresh wood panes and floorboards upstairs in the historic apartment renovated into the multistory gallery, performance hall and artist residency, Halka Sanat. It is one of the few remaining examples of early 20th century architecture in Kadıköy, a fast-growing, pro-youth neighborhood that once housed significant Christian minority communities of Istanbul's proud Greek and Armenian heritages.

The frayed edges of an intricately woven, geometrically-patterned textile mark the floor with its ruddy earth hues, lain beside a pair of rustic, silver earrings. The transcendent tenor of the craft objects and autumnal spectra permeate the domestic ambiance with a universal, feminine presence, as that made by a woman in a room of her own, assuming the poise of a Saharan folk goddess. Piles of coarse sand collect in the corners of the room, conveying an exotic, desert ambiance. The simplicity of the space cultivates the peace of solitude. It is a place imbued with the mystic riddle of an unseen mirror wherefrom works of art appear to the world-weary who wander inside enough to reflect, tempted by a new, collaborative poetics expanding diverse forms, techniques, and ideas.

In the last days of November, 2016, a poem emerged from Şirin Tufan. It spoke of itself, and written in English, it now serves as the centerpiece of "Poem as the Gravity Pull." An octet of artists envisioned its lines, its whole and the physics of its magnetism through a number of mixed media works. Most pieces hang on the wall at eye level in a single room, featuring the classic bay window of the traditional Ottoman home. Not unified by outward aesthetics but by an internalized faith to the spirit of Tufan's literary muse, the some 17 works are directly inspired by the authenticity of her compulsion to poesy, which is said to have struck her like a divine intervention. Certain artists adapted her personal revelation to the letter, while others visualized her symbolist words more abstractly.

The lure of metaphor

An anthropomorphism of nature looks out of the corner of its eye in a visionary landscape by Emrah Danacı, a canvas colored with a seasonal mood, its wintry sky washed in an astral spectrum reminiscent of an aurora borealis, streaked with indigo blues and pale flares grounded by the flowering stalks of a verdant meadow. "I see faces / Rigid, cold," wrote Tufan, poeticizing her experience with aural visitation. It seems a dream had come to her awake, and that in the mists of her suspicion, she stared back into the sounds of her mind, her language transformed into a subtle personality, by the subconscious whims of her intuition.

"I see pictures of persons," began Tufan, leading her poem like a confident seer. The artist Doğu Çankaya responded with a series of four watercolors. They are nebulous emanations of humanoid bodies with liquid contours, striped with the textures of used paper, furrowed and blotted with ink bled through its fibers. Faded scrawls of quasi-calligraphic figures hover around the "persons," recalling the experimental practice of the post-literate, linguistic imagery called asemic writing. A painting by Hülya Küpçüoğlu is streaked with the runoff of droplets fallen from a flock of winged beasts black as night. The backdrop is lathered in dissonant, polychromatic layers, radiating a soiled effect, muddying the sense of subjective perception in the style of a psychedelic dystopia. "Drawing signs with / Disillusioned feathers. / Where have you gone / All mighty soul of mine," wrote Tufan. 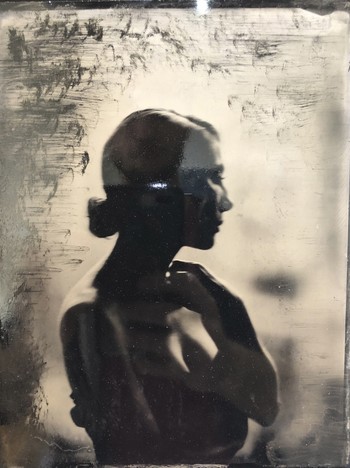 The vintage photographer Tomas Hetmanek contributed two elegant pieces resurrecting the early film development technology of the 19th century. He outlines his enigmatic, female models with collodion, a syrupy mixture of alcohol and ether once used to coat glass photographic plates. With slighted gazes, they surface, as beautiful as they are silent, immersed in an otherworldly veil of obscurity. They are creatures of the darkroom, embraced by a murkiness as pure as a glistening new moon sky. Laid bare, the contemporary physiques shown in his photographs eternalize human existence in continuity with the archaic past. "Lost in the pages of abandoned books / I see faces," wrote Tufan. "You betraying I / All nude and dark."

The intimate, fleshly theme of Hetmanek's interpretation of the poem is advanced and unhinged by Lale Altunel, whose round, sculptural relief encircles a levitating whirlpool of people whose bodies defy gravity as they wing about, assuming flamboyant poses against each other so as to suggest a prehistoric rite of collective harmony, of uninhibited animalistic urges expressed in a shared state of blissful freedom. By the looks on the faces of her various and untamed depictions, meticulously detailed with its sprawling musculatures, every facial inflection from the transpersonal mass exudes a cathartic ecstasy, as to breathe underwater swimming, to fly weightless ad infinitum, to allow gravity to slacken, and all the more so under the enlightening sway of a poem wrested from the reaches of a genuine heart. "Poisoned by the lies of Eros / All painted in stainless colors," Tufan wrote, ending her verses with an embittered, unrequited allusion to the polytheistic and polyamorous Greek god of pagan love.

A master of ink and tea

The current resident artist at Halka Sanat is the polymath intellectual Slobodan Dan Paich, a gentle, older man who is exhibiting two of his works for "Poem as the Gravity Pull." He sat in the ground floor of Halka in his element, preparing for the performance, "Washed Ashore: New Stories, With and Without Words," which will run until Dec. 24 inside the compact arts complex in Moda, out of a room that would seem more like an unfinished basement than a theater seating for 20, if it weren't for its curious assortment of props. The show will feature a distinct cast of storytellers, musicians, dancers, and artists under a concept grandfathered by Paich, who is often seated comfortably before his writing desk and drawing board, wearing a tasteful white beard, and smiling generously with the mien of a quiet sage enamored with life and the surprises it lays bare at the feet of all dutiful, creative workers. 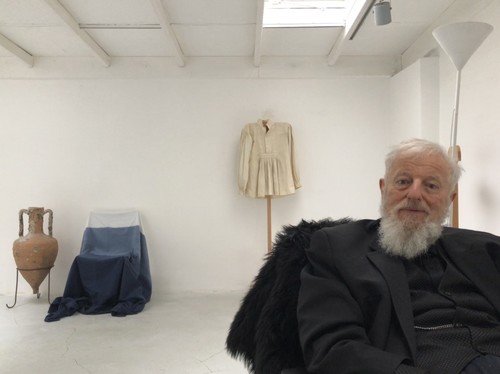 Slobodan Dan Paich, artist in residence at Halka Sanat, discusses the exhibition, "Poem as the Gravity Pull" in the presence of his grandfather's Balkan wedding tunic.

"I go to many academic conferences. I was looking for a place. One year I came to Istanbul, and I said, 'Yes, this is the place.' My English ex-wife found Halka. I had never applied to art residencies because my art is odd. It's not contemporary. It's not traditional. I exhibit but usually art residences are very trendy. If you're not quoting Foucault and have an out-of-focus video they usually don't know what to do with you," said Paich, originally a Yugoslav exile of the Tito regime, since pursuing four careers as a cultural historian, fine artist, theater director and former professor of architecture at UC Berkeley. He has happily collaborated with Halka Sanat for eight years, arriving confidently to the fringes of Istanbul's art scene bearing gifts of talent and enterprise after having founded and directed the Artship Initiative in San Francisco. "I initiate and curate exhibitions at Halka. As a theater director I have developed a process for over 40 years."

The two artworks by Paich at the gallery are characterized by a minimalistic levity. In one, a sable forest scene is contrasted by a single tree, bent and wavering under an invisible gust. The etched white lines of its branches detach from the trunk, and drift away, dissipating, increasingly separated, flung into disarray before a total, lightless maw. Secondly, a jade-tinted head of hair adorns a human face. Its sketch is cracked like a mosaic, pieced together as it were by the coherence of creation's innate, albeit imperfect order.

Paich often spends his daytime hours like a neighborhood regular at Tribu cafe in Moda's vibrant core, where he employs quirky art tool inventions all his own, such as his specially conceived pens filled with a homemade recipe of tea and ink. He draws with a naive sincerity, an unabashed innocence in contradistinction to the highbrow complexities of his reputation as an international academician. "I'm not anxious. I'm not ambitious. It just comes from life. It's not an artistic construct. I don't have a studio. I do my drawings with tea and ink in cafes," he said, seated with a buoyant smile in front of a traditional Balkan tunic worn by his grandfather at his wedding over a hundred years ago. "It's not perfect. It's a "dede" [grandfather] job, an experienced person's job to sense that there is something there worth exploring. Tufan went through personal hell and she wrote. It comes from not being a poet. It comes from poetic imagination, the way of language, a way out. She had to write it."