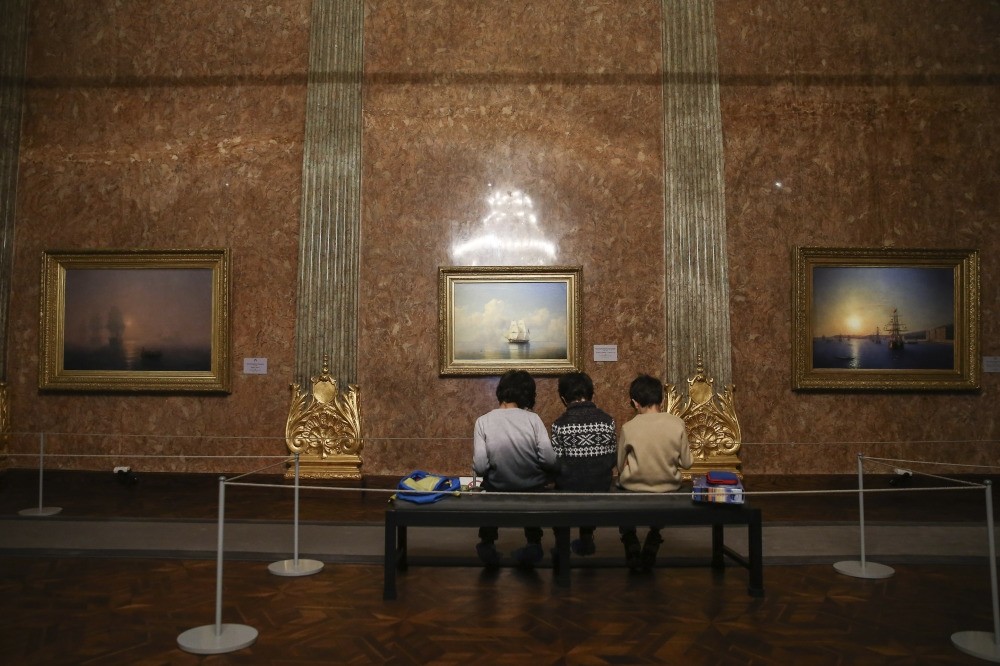 The Painting Museum is located at the Crown Prince Residence of Dolmabahu00e7e Palace that was built by Sultan Abdulmejid in 1855.
by Anadolu Agency Jan 16, 2019 12:00 am

Istanbul Design Center's painting students, aged 5 to 14, attended a workshop at the Aivazovsky Hall of Painting Museum in Dolmabahçe Palace. They learned about history during the workshop, and also made their own history at the same time. The Painting Museum, which serves under the Head of Presidential Administration of National Palaces, is located at the Crown Prince Residence of Dolmabahçe Palace that was built by Sultan Abdulmejid in 1855.

The Painting Museum is accepted as a leading cultural resource, and it offers over 200 paintings reflecting the taste of the late Ottoman Empire. 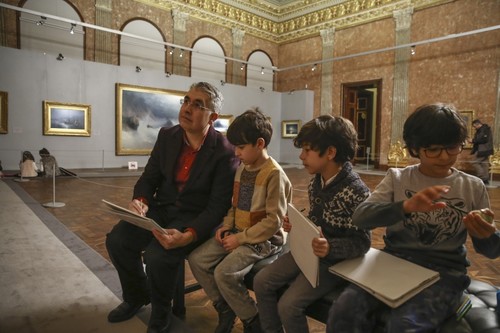 Under the tutelage of painter Cemal Toy (left), children recreated their favorite paintings by means of pencils and dry paints and their own imagination, January 14, 2019.

Under the tutelage of painter Cemal Toy, the children recreated their favorite paintings by means of pencils and dry paints and their own imagination.

The workshop opens a way for children to experience a museum as a living space and aims to develop the children's aesthetic skills and their awareness of museums.

Speaking to Anadolu Agency (AA), Toy stated that the Painting Museum is a venue which is home to valuable paintings in Istanbul. Noting that he conducted sketch and memory studies at the workshop, Toy said: "Here, children learn about history, forge a bond with it and create their own history by means of artworks. We inform them about the titles of the works, their painters and the technique used. We promote visual education for children. It is a bit difficult to draw within crowds. They have to try not to be distracted when someone shows up. In this sense, this workshop is of high importance for us."

Stating that they work on various techniques and methods, Toy said, "Instead of copying the works, we wanted them to create their own work and story."

"Setting children free while painting gives some clues into their inner world. As a child may express the deepest feelings that they can't talk to anybody about via painting, it is important in childhood. They are free to draw all kinds of paintings in their sketch books or art books. We look at the paintings they chose for the workshop. The colors they chose, their being extroverted, vivid or introverted and pessimistic, make so many things clear. In addition, we look at the expressions on the faces they draw. With deeper analysis, we can detect their inner, psychological conditions and their fears."

Toy stressed that the children enjoyed spending time in the museum and said, "We want children to see the museum, where they spent an hour, as a part of their life and to internalize the feelings and thoughts of the works they come across there."

Toy said that in time, children develop their own technique in accordance with their characters and tendencies. Head of the Painting Museum Gülşen Sevinç Kaya noted that the museum, which was opened in 2014 and consists of 11 sections, is home to over 200 paintings reflecting the taste of the late Ottoman Palace.

Here, we have a conceptual collection and works by the most famous Turkish and foreign painters of the time. In addition to the works by Aivazovsky, Şeker Ahmed Pasha, Osman Hamdi Bey and Zorano, the series of Sultans' Portraits also attracts a great deal of attention."

Expressing that they want to see children in the museum more, Kaya said: "At the workshops, children choose paintings in accordance with their interests and create their own works. We hope to exhibit their work in the future."

Nine-year-old Elif Nisan Öztürk, one of the participants of the workshop, stated that she loves painting and added: "We walk around the museum and draw the very image of our favorite painting. I can draw everywhere, at class, school and home. I want to be a painter when I grow up."

Another participant, eight-year-old Ayşe Özaltın, came to the workshop with her sibling and said: "We came here to draw. We loved the oil palm painting and drew that. I have drawn and painted since an early age. I love painting so much. My sibling started to paint after enrolling in school. There are beautiful paintings here. I want to be a musician or a painter in the future."