Gaza theater wants to be voice of Palestinians to world 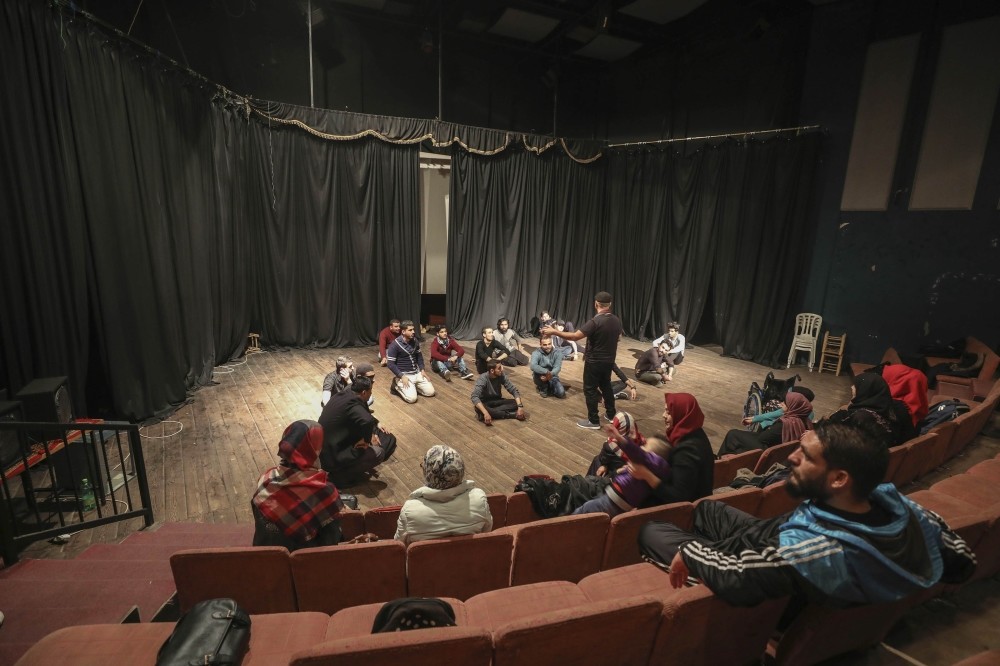 The academy, where 47 young people, among which seven are handicapped, get training, is the first institution that conducts work in this field in Gaza, January 13, 2019.
by Anadolu Agency Jan 16, 2019 12:00 am

The acting academy Palestinian Theater was founded in Gaza nearly three months ago. It aims to introduce the Palestinian issue from the perspective of Palestinians to the wider world.

The academy, where 47 young people, among which seven are handicapped, get training, is the first institution that conducts work in this field in Gaza.

The founding father of the academy and director, Isam Şahin, told Anadolu Agency (AA) that the idea of establishing this acting academy occurred five years ago. Şahin mentioned that they started accepting students three months ago as a result of their work to conduct the project.

He explained that they already provide training at the beginner level at the Palestinian Theater, and they will work 30 days more to perform a great play telling the state of Palestine after three months of training. The director reported that they will open a course for advanced learners and then for professionals when the ongoing course is completed. "Every course will continue for three months, and they will end with the staging of a play," he said.

Noting that the course attendees rehearse on a play to perform it at the end of January, Şahin remarked, "Our students' desire is to make their country's voice heard in the world and to tell their wishes and problems from their own perspectives."

He stressed that the biggest obstacles they face are that the universities in Gaza do not provide education in disciplines such as drama and theater and that they do not receive any financial support for the academy that they established.

Şahin and his team, who are experiencing financial difficulty like many other Palestinians because of the Israeli blockade, try to sustain their project through their own means and efforts.

As the only team conducting work in this field in Gaza, the Palestinian Theater waits for financial support from the government and nongovernmental organizations (NGOs).

Emel El-Mısri, one of the course attendees, said: "The Palestinian Theater is a rare opportunity to learn acting, to reveal my talent and to prove my existence in the society as an active person."

Stating that she learned how to act her role and to work in harmony with other actors and actresses during the first level of the course, Mısri added that she wants to be a professional actress and to have a regional and international reputation in order to introduce Palestinian people's problems in Gaza to the world.

As there are not enough centers or institutes where those who have talent in music and acting can receive education in Gaza, the number of people trained in these fields is limited.

There is one center providing music education in Gaza apart from this newly established academy. At the center in question, children between the ages of 6 and 14 are trained.

Within the framework of conducting personal attempts in drama and the arts, some Palestinian actors present short plays at special events, like wedding ceremonies.

Israel has been implementing a land, naval and air blockade in Gaza since 2006. According to data from the Public Committee for Breaking the Blockade in Gaza, the rate of unemployment in Gaza is 70 percent, while the rate of poverty is 80 percent.