The Pilevneli 10: At the Factory in Mecidiyeköy 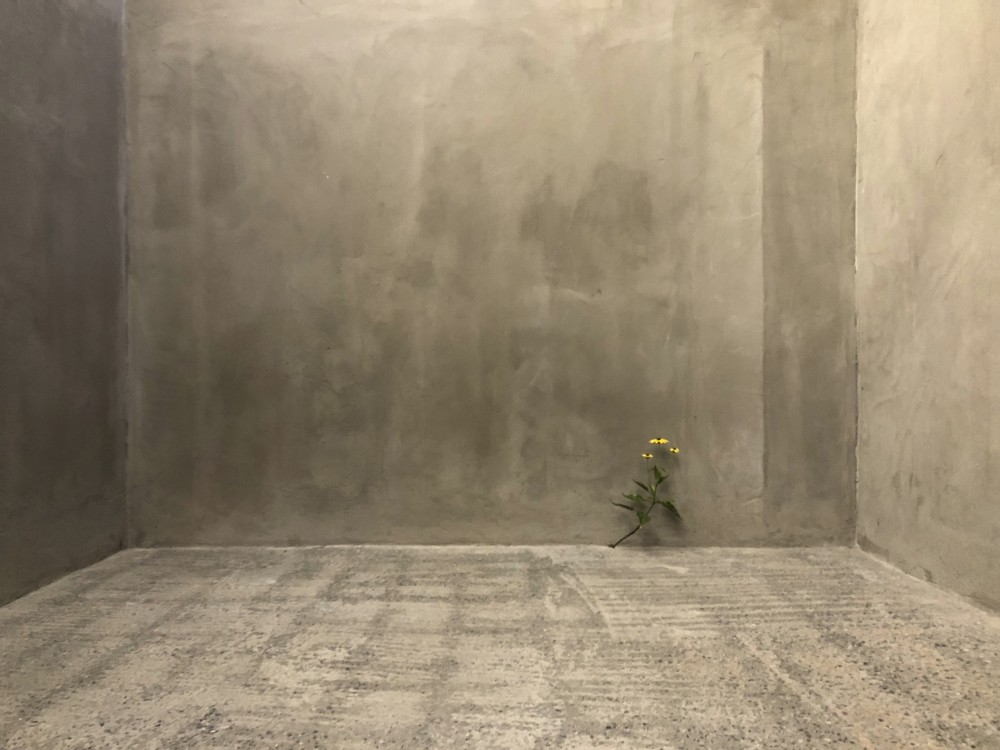 In its fresh annex in Mecidiyeköy out of an unvarnished, multistory warehouse-like museum comparable to Istanbul Modern, Pilevneli Gallery invites Istanbul's art explorers to appreciate the individual practices of 10 international artists, many living between multiple cities in the U.S., France, Germany and Turkey

A wind tunnel accelerated between the towering Quasar skyscrapers in Istanbul's congested Mecidiyeköy district, as light rain pelted against exposed skin among the huddled, cold masses who overflowed off the sidewalks like the water table under the colonnade of a raised freeway. Traffic raged. Millions rushed. Marble stone stairs led up through a vertical concourse of aching heights, picturesque for its raw, geometrical symmetry but less than beautiful for its demonstration of sheer, technical power. The corporate spires flew in the face of all that is grounded, personal, human.

By the slick, rainswept, double highway, and in the outdoor court of towers seemingly shaped by the divine intervention of a Tetris game played by Zeus, the surname of one of the city's proudest gallerists, Pilevneli, appeared on pedestrian signage, marking the way to an alternative reality conceived out of the thin, high air by practitioners of contemporary art. Its door gives way to blank terminals where tried methods of madness have devised soft engineering techniques for the mind to traverse transcendent worlds within the worlds of sense and reason, expanding consciousness with the freedom of a lucid dream.

In such a wombs of collective potential, the creation of knowledge becomes visible, palpable, and audible. Transformations of color and whiteness, form and emptiness, sound and silence come to life through direct expressions of human ingenuity and personality. The exterior of the Mecidiyeköy complex is unassuming, deceiving even, as a leafless tree stands at its door opposite a columned chimney of ancient brick, shading patches of manicured grass under the overcast, sunless dim of midwinter in the thick of a bone-numbing humid spell engulfing the global urban center with the atmospheric pressure of its two seas.

Interior zones of the Factory

Once inside, warmed by the light of "Human Reflection" by Arik Levy, eyes are flooded with a FractalLED installation of countless light strips networked to 50 units, strung up to effect a circular dimensionality, enwrapping those who approach in a luminous experience much like a deer would freeze motionless before a pair of headlights. In the case of Levy's aesthetically-charged invention, the oncoming vehicle is a mere apparition of conceptual space.

Under its visual sway, an individual's nervous system flutters like the wings of a moth before a dancing flame, reflecting the nature of incorporeal enlightenment at its essence, centered by an unlit exposure. But unlike moths, people are less inclined to its dark core, as to stand beneath its interlaced, radiant disk is to be drowned under waves of metaphysical awe. 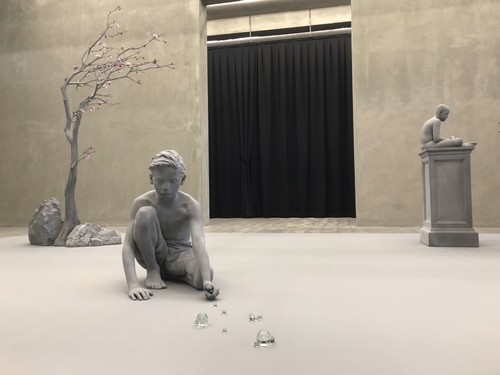 At the back of a hallway corner immediately across from the access door into the Factory, a work by Tony Matelli, from his Lapses series, titled "Weed #443" (2018), is affixed at the right angle where the floor meets the wall. By first impressions, its appearance is in perfect contrast to the gleaming mechanics installed by Levy.

The piece, a painted bronze model of a plant, is chilling as a symbol of post-industrial desperation at the end of nature. The sliver of natural growth that it would represent to an unknowing eye emerges from its lifeless, barren concrete surroundings, enclosing its realistic yellow petals in a measureless vacuum of the spaceless void.

Around the corner, the current exhibition of over a hundred artworks starts to snake through the nondescript weave of rooms that recently opened to the public, with the airy scent of construction dust newly settled. Thin black strips of fiber are fastened tightly to block passage into dead ends, sometimes at the foot of Escher-like staircases that lead nowhere.

There are many architectural question marks at the Factory, such as windowless rooms which have since become shrouded in the enigmas of Pilevneli's renovation, now purposed entirely to show contemporary art. The gallery admits everyone freely, at no cost to the public, so that all might join in fishing out the obscurities of the collective imagination from every nook and cranny of the post-modern building. What was once a Factory has turned into a kind of tool shed of visual ideas capable of revising human purpose.

"Bosphorus" (2018) by Refik Anadol is a digital optical illusion, curated as a trio of editions to exhibit his eight-minute video. His utilization of custom software to create moving data sculptures works wonders against two ambient sound channels. Viewers are engorged with the simulation of liquid phenomena, as the virtual, watery surface rolls to a boil, and then crashes in on itself successively like a churning sea. Its pixelated rectangles emulate H20 molecules as transfigured into a whirlpool of epic proportions at one of the last Factory gallery halls furthest within its bowels, where the video is projected against a massive wall.

As people stand silhouetted before its gushing tide of artificial currents, they resemble Odysseus facing the mythical Charybdis of Homeric tradition, that wormhole of life-threatening passage over the Mediterranean Sea, an ecology continuously fraught with humanity's confrontation with itself and with nature, considering that the International Organization for Migration (IOM) reported 2,200 crossings in the first 16 days of 2019.

A novel decad of art practices

And coincidentally, shown next to where "Bosphorus" initially bubbles up from the deep is the 12-minute video, "I Saved My Belly Dancer" (2015) by Youssef Nabil, a Cairo-born Egyptian artist based in New York. Within an enclosure of opaque curtains, his piece is on repeat, recurring like the daydream of an Arab migrant from North Africa, a live action character played by Tahar Rahim. He is flat on his side, washed ashore on a fictitious coast where apparitions of his cultural past come to life.

Unmoving, equipped with flags of the green crescent, and dressed to the nines in the gender-binary fashions of the Ottoman military and its multinational society, his people stand before him, encompassing Arabic life from Mesopotamia to the Maghreb. When the costumed troupe fall into the sand, Salma Hayek walks onscreen in the role of a belly dancer, smearing his unaffected body with the warmth of her passion.

Nabil satirizes conventional depictions of Eastern and Western peoples when his video concludes with Rahim in cowboy clothes riding through the deserts of the American southwest, accompanied by Hayek, his belly dancer, on the back of his saddle. The striking juxtaposition of popular archetypes conjures a counterintuitive balance of images, commenting on the irreversible experience of assimilation, and its unique effects on men and women. The piece is ultimately foreboding, visualizing migration as a fantastical, amnesiac embodiment of the other. 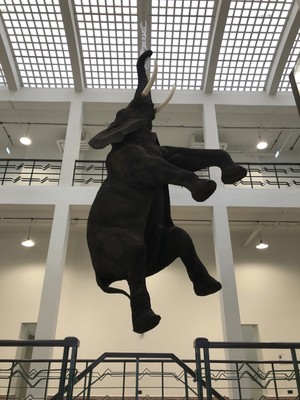 The magical realism in the sculptures of Hans Op de Beeck and the flagrant, textural abstractionism in the paintings of Erdoğan Zümrütoğlu are on either end of the ideological spectrum in dialogue with themes addressed by Nabil. At the Factory, they are situated beside each other, divided by a fabrication of a life-size elephant dangling from the ceiling, sculpted by Daniel Firman out of polyester resin, flexible polyurethane resin, fiberglass, steel and fabric, titled "Loxodonta" (2017). The elephant hangs in the room, symbolizing certain blaring points of social ignorance. Recognition of unforgivable oversight, for example, to grant refugee status and international rights to asylum seekers in Turkey, would admit an unforgivable reality.

Beeck, on the one hand, with his meticulous portrayals of natural forms, human and vegetal, evokes the eternity of the moment, and the strength of fundamental presence, that, when the fleeting moment is paused, every figment of being holds lasting, mystical fascination. On the other hand, Zümrütoğlu breaks open the seams of representation with a liberal madness, dousing his palette of trans-personal expression with an evasive, feral purity, impossible to catch, beyond immortality, relaying truths greater than social norms and acculturation stereotypes. Under his elephant, a triad of bronze sculptures by Firman cuts the human body into a clever arrangement of theoretical amputations, accenting the innate disorder of individuals in relation to themselves despite sociocultural influence, negotiating the contradiction of separate wholeness.

At the Factory, the current artworks displayed reflect individual practices, whose motifs converge and counteract with world-class curatorial insight. Pilevneli is extending its reach in Mecidiyeköy by prompting residents of Istanbul, and its passersby, into an inspired realm of conceptual speculation and artistic invention, to walk, like Şener Özmen in his video, "The Distance" (2014) over a critical space where each footstep, even over the sands of eastern Turkey, echoes with the names of artists.