A painter at war: Damascene debuts in Istanbul 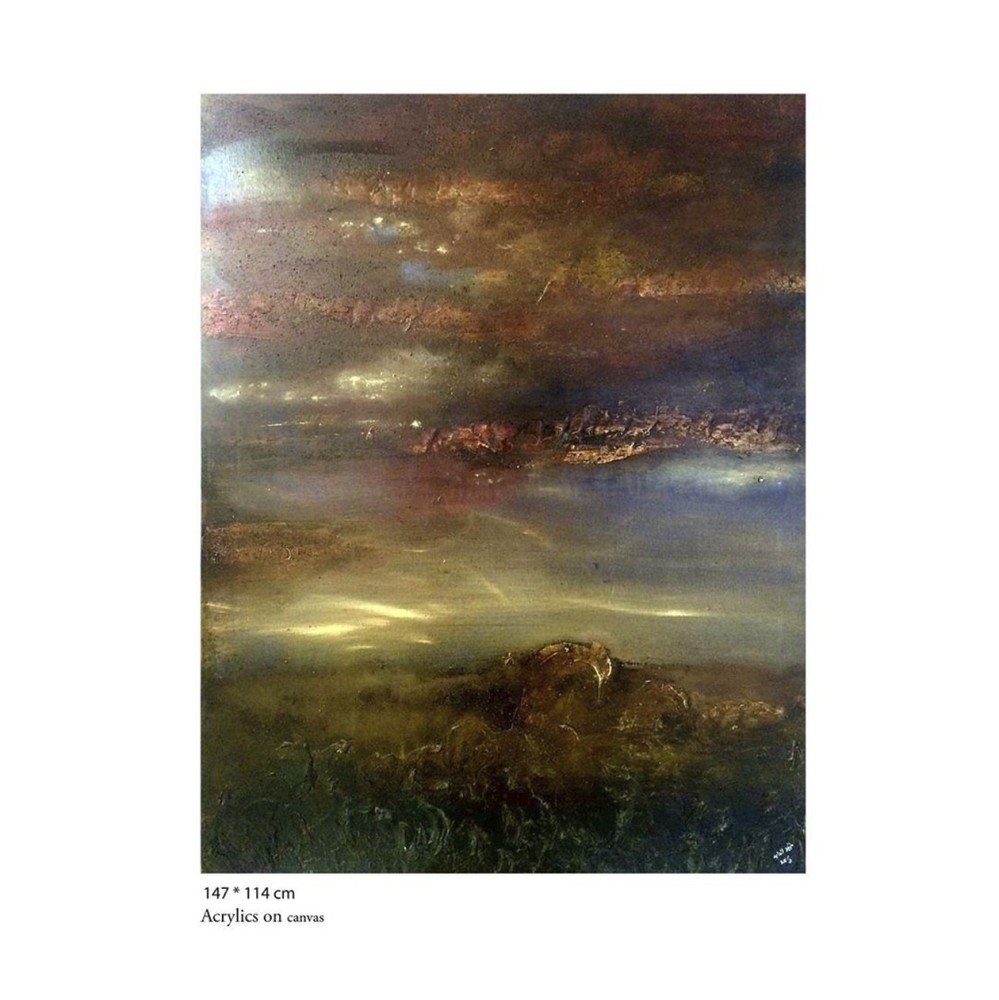 Khozema Alaaed remembers the landscape of his childhood by the Golan Heights, and how his family sought refuge in Damascus amid conflicts along the Israeli border. As an art student and now a painter gaining international recognition, he lives in Syria, enduring the civil war, using its soil and tragedy as inspiration

It rained in the old village by the Bosporus, its locals ambling about under cafe awnings, moving slowly up and down the one main street to follow the latest gossip, whatever might excite the midwinter low. It was Wednesday, and the weekly open-air market was alive with farm fresh goods hawked by familiar faces on a residential alleyway. Albanian cobblestones snaked lopsided up the forested, shorefront hills, where Anatolia, and all of Asia begins to stretch from the Mediterranean to the Pacific. With its ornate, wooden historical apartments once housing Jewish, Armenian and Greek neighbors, there is a unique air of cultural diversity in Kuzguncuk.

From a storefront window that, on Wednesday afternoons, is surrounded by craftswomen and agriculturalists, Kelimat Gallery keeps its door open, welcoming people of all ages, most wandering in the neighborhood for a simple greeting, or a moment of shelter under the falling sky after perusing handmade fabrics lain out beside a truck of Gemlik olives. The personable director Adnan Alahmad is moved by visions of a bridge linking Arab and Turkish people through art. Formerly a prominent gallerist in Aleppo, his move to Istanbul has become a boon for his connections from Iraq to Morocco, virtually the entire Arabic-speaking world, and simultaneously his curations offer hidden treasures for Turks and more curious urban explorers to glimpse the world through the eyes, talents and ideas of Arab artists.

A series of paintings conceived over the last three years in Damascus by the Syrian artist Khozema Alaaed now hang on display throughout Kelimat Gallery. As a young artist educated at Damascus University, graduating from its Fine Arts Department last year, Alaaed stayed in school with a steadfast focus as the war raged around him in the 11,000-year-old city following the infamous Damascus offensive in 2013. Alaaed is one of the hardy souls and a true minority among national artists who have remained local in the face of what the rest of the world might call madness, or certain death. According to UNHCR statistics, some 5 million of the 22 million pre-war Syrian population have fled. But there are others, for example, an artist in the naive, Brut movement that Alahmad celebrates and collects, Ekrem Zave, who remains at work in Qamishli in northeastern Syria, painting on wallpaper for lack of canvas.

The contemporary artist in Syria

Having moved from one battered home to the next in Damascus, internally displaced in the midst of total conflict-ridden destabilization, Alaaed arms himself with the essence of reason, toward aesthetic fulfillment, to live for pure human expression, raising his brush colored with vestiges of whatever resources he can find. And he labors undiminished, pressing insight, skill and wonder into his mixed media canvases in his kitchen with his children and family nearby, confident despite knowing he is besieged by a scale of mass destruction globally unprecedented in the 21st century. He is foremost dedicated to the muse of the land ("al-Ard" in Arabic), which to all who suffer war-torn territorial disputes, has a special meaning. But for Arab people particularly, the significance of the Levant has an ineffable charge. 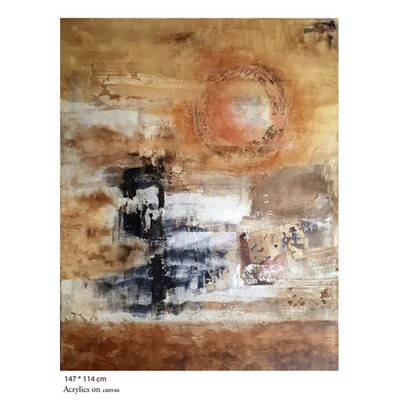 As a painter, Alaaed's creative process is essentially site-specific, drawing from the earth where he lives and remembers, proving the limitless, eternal presence of the Golan Heights of his earliest days, and his unshakable faith in the resilience of his homeland, his people and his art. He mixes stone and soil into his peculiar, shadowy rust-hued palettes that, at times, are suffused with bursts of dreamlike, luminous light. As much as he is a master of darkness, so he excels at portraying its opposite, absorbing extremes on either side of the spectrum with a mind for celestial unity. He paints rays of hope escaping, bleeding, reaching through the seemingly impenetrable gloom. And where he is textural, he cracks smears of caked dried paint to create naturalist slivers resurrecting the substance of the charred soil wounded beneath his tired feet with sculptural immediacy.

Proudly seated in his gallery, surrounded by contemporary Iraqi sculpture and catalogues from past exhibitions, including an exhaustive survey of living artists from across the Arab world, Alahmad types in Arabic letters, staring into his computer screen with a smile. He swung around on his swivel chair, his shock of silver hair and cool demeanor a testament to his turbulent career as a Syrian gallerist. Moreover, he conveys an exuberant, unswerving passion to uphold the importance of fine art in the making of history. His son and assistant Karam stood next to him. Then he opened his phone and made a video call to Alaaed. The artist answered from Damascus, the sun on his face, the wind in his black hair, looking trim, clean and stylish, yet bearing the hardened gaze of a man in his prime who has seen the devastations of war. Unable to forget the places and people he has lost, he now works tirelessly to transform what he has seen by giving its form his own color. He is a creative soul bound to the medium of paint.

"I use colors from my memories since moving to Damascus. Living in the war, everything is dark, except for a little light. You need some light to be happy," Alaaed said, responding in Arabic while Karam translated, laughing in good humor regardless of the fact that he has no studio and must scrape by to work as a contemporary painter in Damascus. "It is a very difficult situation. It's more expensive to find materials, and paint. I make colors by hand, and add soil. I need to move beyond the reality of contemporary art in the world, toward a new world, a new history." 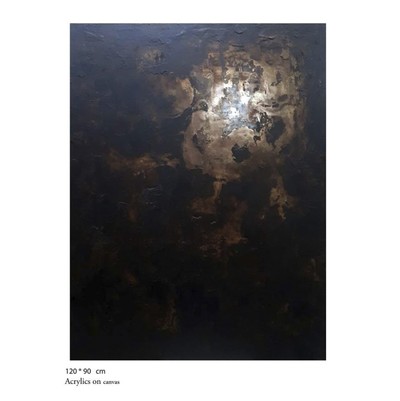 His colors are remarkable because they possess a mystical dynamism akin to the massive skies under Syria's sweeping Mesopotamian plain, yet they are made from rubbish, cartons, and other recycled materials. There is simply no recourse to adequate materials to run a professional studio in Damascus. In turn, Alaeed is arguably forced, and compelled to create within a mode of expression that is a partial manifestation of the war's unspeakably dark energy. Approaching his thickly layered, doom-inducing canvases, irregular granules of gravel and scraps of paper inked with Arabic script come into focus. From a distance, the subtle, mixed media dimensions add to the effect of what military leaders since the late 19th century have called the fog of war, the lack of clarity that leads to blind ignorance before the onset of indiscriminate violence.

The pathless truth of Damascene life

"We have been living in the war for seven years, many of my friends died. I live between the land and the sky. In all of my paintings, I search for the meaning of my land, from when I was a child in the Golan Heights, and in Damascus. I study the land, the geography, and the sky," said Alaaed, who is surprisingly cheerful, enjoying the success of his solo, debut show in Istanbul, as he has received invitations from prominent galleries in New York, Spain and Italy. "One person, like Picasso, defines a school or a movement in art. For me, I am also one person, with knowledge and views. I do not adhere to a specific, past tradition in art. I paint with many layers and then break the paint."

Like his mixture of soil and paint, Alaaed has fused his memories in the Golan Heights and in Syria with his current life as an artist who keeps working in Damascus as his country nears a decade of uninterrupted warfare. Alahmad soberly explains his role as a Syrian exile in Istanbul who, by virtue of his vast networks throughout the Arabic-speaking world, is, by default, a natural liaison for young artists like Alaaed and others from Syria and elsewhere in the region of the Middle East, North Africa and the Arab diaspora. In the process, he is bridging his culture with Turkish artists, and with Istanbul, a city that has always looked both east and west in step with its heritage as the last, diplomatic, imperial capital of Islamic civilization.

Kelimat Gallery looks forward to spreading its wings further in 2019, with exhibitions in Tunisia, Spain, and Qatar as well as an ambitious initiative, to found a new museum of Brut art in Istanbul. Alahmad has already scouted the location, in Üskudar, in a renovated Ottoman-era apartment. He plans to vitalize the legacy of unknown Turkish artists like Esma Ekiz who began drawing in her 50s, as well as others, Fatih Urunç, and Ekrem Zave, who, like Alaaed, never stopped working as an artist in warring Syria. From the Golan Heights to Mount Qasioun, the paintings of Alaaed chart the life of an emerging, contemporary artist, and more simply, a young, working man in the world, constantly uprooted, in search of his land.