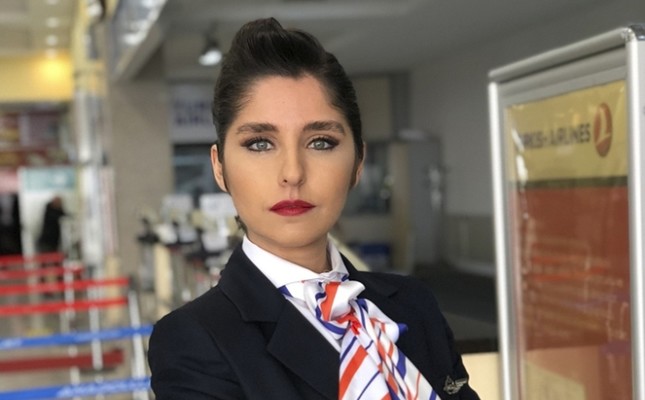 Beyzanur Mete takes part in the film as "the special face" chosen by Turkish Airlines.

Then, she flew to Cappadocia for "Return to Home," which is supported by the Ministry of Culture and Tourism General Directorate of Cinema and sponsored by Turkish Airlines.

The talented actress first met Kurşun to become and an acting coach for the film. The director then decided that she would be featured as the special face of Turkish Airlines in the production, which tells the story of the rescue of 215 Japanese passengers during the Iran-Iraq War. Mete will appear as a flight attendant in the film.

Speaking about "Return to Home" and her awards, Mete said, "Last summer was a lucky period for me. I featured in three films and continued working with 'Diriliş Ertuğrul.' I got the recognition with the awards. They made me really happy."

"Besides playing the lead role in two films, I was so happy to pick up the award for the 'Most Promising Actress.' It motivates me. I love my job. I work hard and make a lot of effort. I'm proud that my hard work is being recognized. 'Return to Home' was a surprise for me because I met the director to be an acting coach for the film. Then, I found myself in the cast of the film. I play the role of a flight attendant on board a Turkish Airlines flight that landed in Tehran. I am sure it will be a heart-warming film," she added.

Share on Facebook Share on Twitter
Previous in Arts An architecture, design and art based platform, "The Circle" initiates... Next in Arts The Consulate General of Hungary in Istanbul held a special event...
DAILY SABAH RECOMMENDS