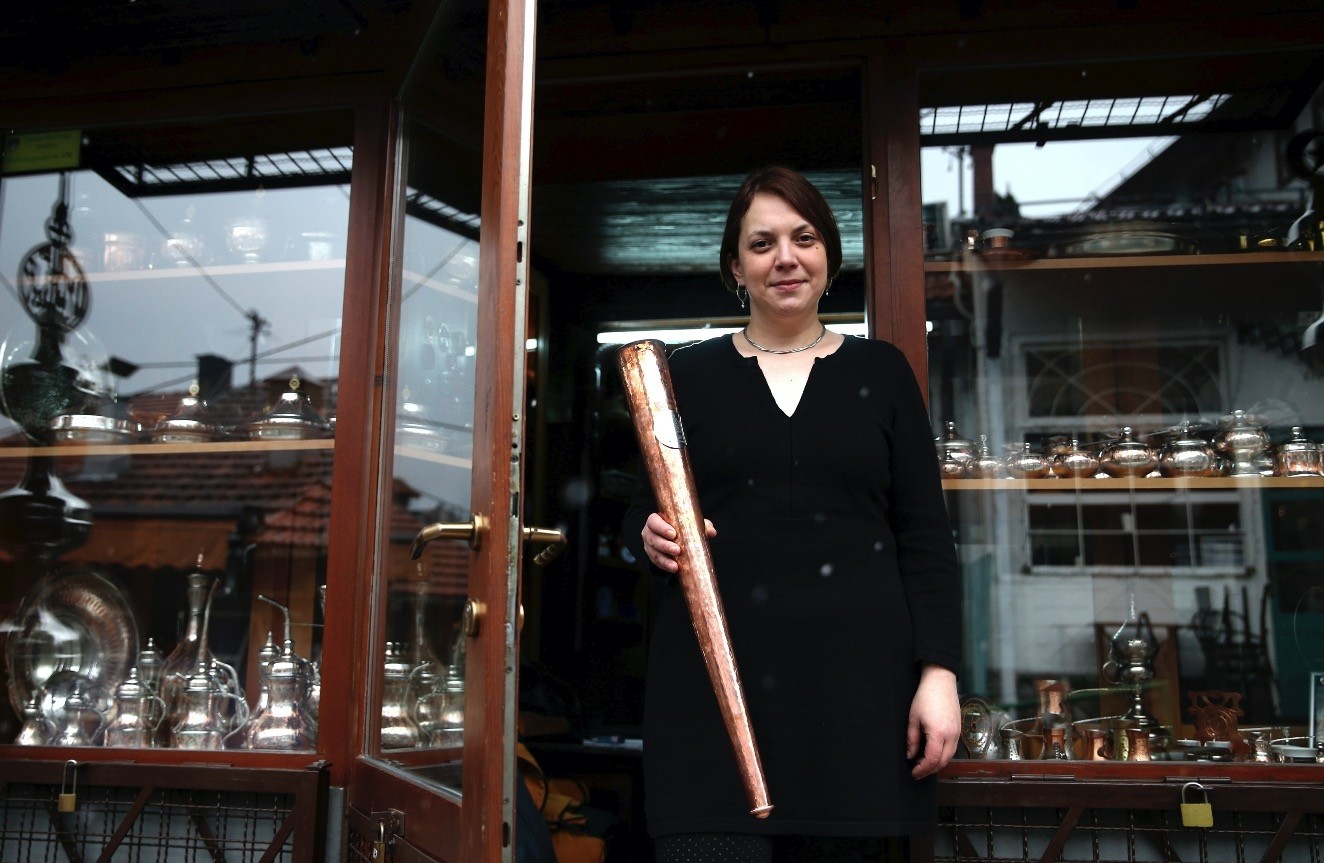 Nermina Alic, poses for a photo with the Olympic flame torch that she designed for the upcoming European Youth Olympic Winter Festival in Sarajevo, Bosnia-Herzegovina, Feb. 4, 2019.
by Feb 07, 2019 12:06 am

Nermina Alic learned her trade as a coppersmith by watching her father as a child. Now she is hoping her skills - and a battle against prejudice - can help keep the dying art alive.

The 37-year-old was chosen to craft the peace flame torches for the European Youth Olympics opening on Feb. 10 in Sarajevo, the largest sport event to be organized in Bosnia since the 1984 Winter Olympics.

She was recommended for the prestigious commission by one of the male craftsmen she works alongside in Sarajevo's Old Town, where coppersmiths have crafted Turkish-style coffee-pots and traditional round baking trays for the past 500 years.

"I was definitely honored and happy to work on such unique and unusual project," Alic said. "It is extremely good and positive for this city to have again Olympic spirit and Olympic flame."

She grew up watching her father Hadzan shaping copper into the souvenirs sought by Bosnians and tourists alike in their shop, where the trade has been practiced for the past 200 years.

While other women there are involved in decorating the pieces, she is the only one shaping the copper and tin-plating it over an open fire. And the numbers of workshops in total are dwindling - estimated at about 50 in the whole country, which is roughly 5 percent from a century ago.

"It was so natural for me to be working here," said Alic, an only child who inherited her father's business. "Much before I have realized there was division on male and female jobs, I had understood that copper is material that I understand, love and function well working with."

Alic trained as a sculptor at the Sarajevo Academy of Fine Arts and started helping her father, who has been in the trade for 70 years and is today the oldest craftsman in Sarajevo.

"Most customers coming to the shop look for a male and never address me," she said, while a muezzin prayer could be heard from a nearby mosque in the still largely patriarchal society.

"But when they recognize they can do business with me, they don't care if I am male or female. When you are good at what you do, all barriers disappear."