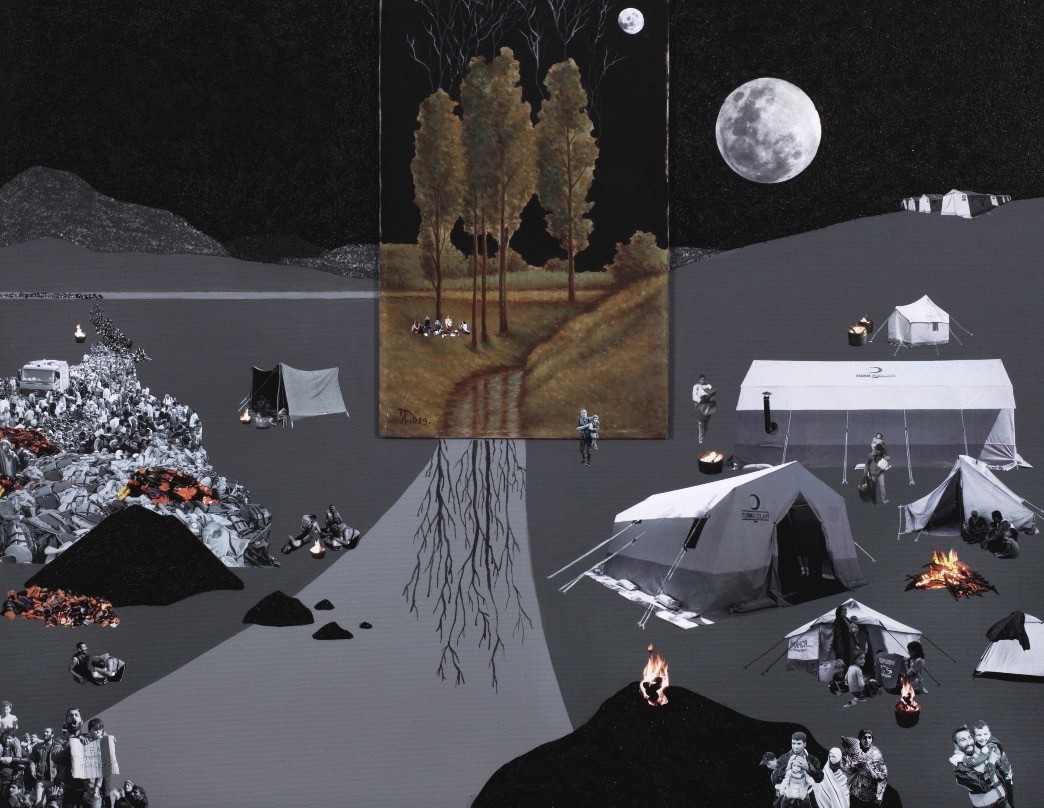 Old landscape paintings adopted as portrayals of ideal depictions of nature, which are integrated with the rest of the canvas through plastic intervention, are the main focus of Batu0131bekiu2019s compositions in the show.
by Zeynep Esra İstanbullu Feb 20, 2019 12:07 am

Known for her sensitivity in matters related to women in Turkey, Kezban Arca Batıbeki is now offering a new show, focusing on the issue of migration and refugees, open at Pilevneli Gallery until March 24

Kezban Arca Batıbeki's solo exhibition "Unpromised Lands" is at Pilevneli Mecidiyeköy until March 24. In her collages, Batıbeki manages to depict the stories of the people in migration regions, the refugees and migrants who are either forced to leave or who choose to leave their home. She uses a tone of subtle distance, without trivializing nor dramatizing the issue.

In this series, through her narrative, Batıbeki illustrates different worlds that reflect usual and unusual states of mankind. Old landscape paintings adopted as portrayals of ideal depictions of nature, which are integrated with the rest of the canvas through plastic intervention, are the main focus of Batıbeki's compositions. They instill seeds of hope, faith and passion that are hidden in the depths of the "Unpromised Lands."

Apart from the refugees, people from all walks of life longing to search and escape, and people from different geographies with varying economic and social identities are also illustrated. Likewise, individuals who change locations not only to survive and reach out for basic human needs but also to get away from the political climates shaping their lives are featured. The hybrid identities that are presented in her works transform into illustrations of deep transformations that exist in a multicultural world defined by migration. Throughout the imagery she uses in her collages, Batıbeki maintains her usual distant attitude to avoid the risk of representing the refuges in an oriental and marginalized manner; thus, she manages to present the theme in a balanced and creative way through her unique artistic practice. The images of these people around the borders and in new lands Batıbeki gathered from the net alongside the printed publications incorporate the surreal scenes of the paintings, which are centered on imaginary and ideal landscapes and invite viewers to question the state of mankind.

Daily Sabah conducted an interview with Batıbeki on her career and motivation, as well as the mediums she uses to create her work.

Having started her career as a graphic artist, she later moved to the field of painting. "In the aftermath of completing graphic arts education and working as an illustrator and art director for a long time, I started painting. Exactly 36 years ago, it was. Over the years, I felt an urge to create art in various branches such as photography, installation and short film in addition to painting. I think getting the chance to see art activities abroad is more valuable than the education I received. You can find that very special path you want to walk freely only when you are eluded from all the oppression. This is how I tried making art in various branches," she noted.

As an artist, Batıbeki employs various disciplines like painting, photography, graphics and video together in an effective fashion. "At times I find the canvas inefficient for the topic I wanted to study, or I get bored, I embark on various quests. When it comes to speaking of my art, the thing of which I can speak highly is my sincerity. I feel free to say that I don't drift with the tide of specific streams, trends or figures. All my work has something to do with my feelings. As the work and feelings evoke one another, material unity, color or compositions necessarily complete each other. Hence, a good viewer can guess which work belongs to me at different platforms."

Known to focus on matters about women, the artist has drifted toward a wider problem: the state of migration. "From the very beginning, I focused on 'women in Turkey.' Rendering women's portraits from all segments of society I came across via media, especially from my kith and kin, always grabbed my attention. In the aftermath of the huge immigration wave Turkey let in, the church yard, which is also home to my workshop, hosted an exhibition that exposes the photography of immigrants' escape stories taken by themselves via mobile phones. Those images were engraved in my subconscious and I was affected by them such that this theme aroused on its own."

Batıbeki has also prepared a book about her latest exhibition "Unpromised Lands," where she uses still paintings as a core and intervenes in them with her unique touch in the collages. "Most of the focal points of the compositions on my canvas work consist of 50- to 60-year-old landscape oil paintings." Installed with a picture-in-picture style, the ordinary still life paintings get integrated with the artist's brush and transformed into a black-and-white, dark world. "The exhibition 'Unpromised Lands' also has a snow globe and a huge installation I made with an inspiration from the topic. Snow globes are amusing objects that make people happy; however, mine is quite dramatic. The installation, on the other hand, really tired us out both spiritually and physically. We worked in bad weather for days. However, it was impossible to create such a work without having the huge spaces offered by Pilevneli Mecidiyeköy. Istanbul does not have a second gallery where I could create such an installation. This one added a brand-new dimension to my art career; however, as I couldn't complete the installation until after the publishing, these two works I personally attached importance to couldn't be included in the book," she said.

IMMORTALIZING ART IN A BOOK

"I'm not the kind of artist who holds exhibitions often or who creates much. Hence, I want to hold long lasting exhibitions. All the paintings I made about this topic can be seen in the book. Every single one of them has details that I engraved like needlepoint and out of which I got a big kick. Readers can catch every single one of these details; however, it is difficult for an exhibition visitor. They can easily be ignored while seeing the works in a limited time. The book's text was written by Derya Yücel, who is quite a successful art writer and curator. The design of the book, on the other hand, was made by Timuçin Unan, a very successful designer. The book was published within the body of the Pilevneli Project and will be on sale at Pilevneli Mecidiyeköy and in bookstores specialized in the arts from the opening of the exhibition on," she concluded, explaining how and why she released the book. 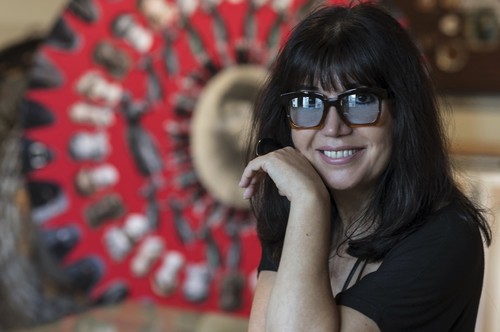 Kezban Arca Batıbeki was born in Istanbul. Batıbeki graduated from the Fine Arts Faculty of Marmara University's Graphic Arts Department. She has worked for art and women magazines in Turkey as an illustrator, designed book covers, children books, movie and theater posters. She created an animation film for Swedish State TV and worked as an art director and photographer on the films' production. In 1983, she relocated to Oxford and London to focus on her painting.

Batıbeki has been featured in many solo exhibitions and participated in numerous Turkish and international group shows. She has been widely regarded as one of the most insightful artists concerned with women in pop culture involved in the contemporary art scene in Turkey. She works on paintings, photographs, installations and short films about women. She also writes about art for newspapers and magazines. The artist lives and works in Istanbul.