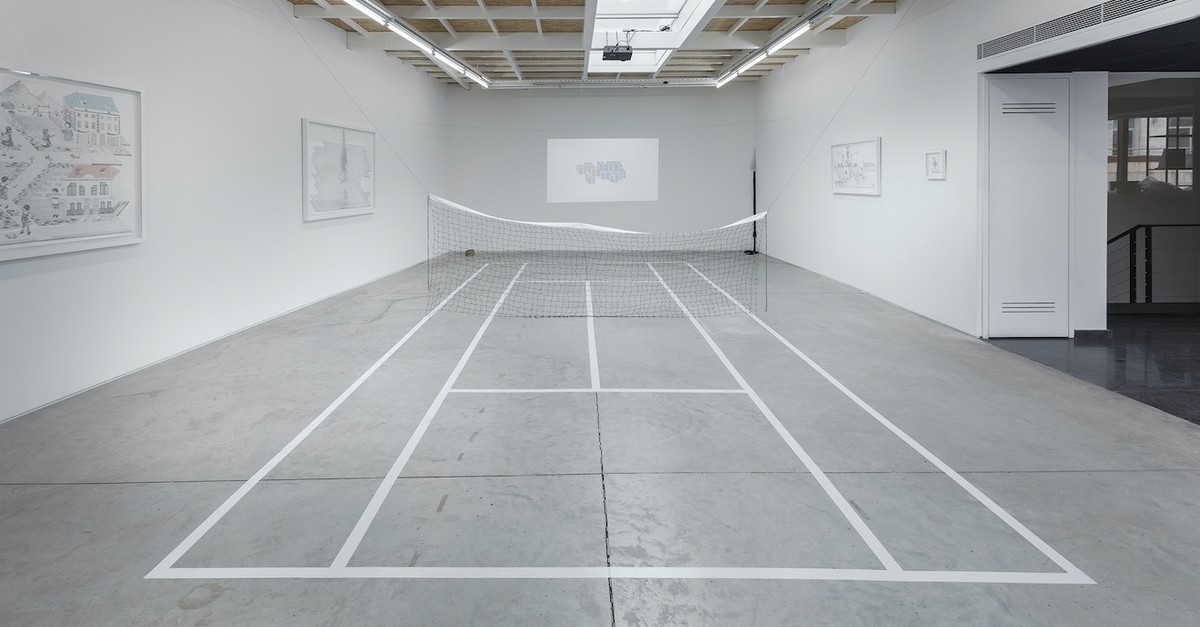 In the beginning was the word, ‘Yuka.' Its quartet of meanings span Turkic etymology and includes the Japanese concept for domestic flooring. Its calligraphy is the seed and title for the trans-media exhibition by Yuşa Yalçıntaş, whose works, on display till March 2, draw out an exhaustive array of visionary symbolism

Mr. Yuşa Yalçıntaş is a soft-spoken young gentleman. He exits from the elevator on the third floor of the Juma building in Karaköy, rising through the modern complex of art galleries, to appear in the off-white hall where his current exhibition, "Yuka," is on display. He wears a suit jacket of brown cloth with a felt sweater underneath dyed in a seasonal hue. His smart, casual style is only offset by his sneakers, marked with the black lines expected of streetwear.

When speaking he pauses often, even before uttering a word, at ease in silence. He is patient with himself, deliberating how to cast every phrase in English, like a poker player careful before exposing his hand. But he is not bluffing. His art is the fruit of rigorous devotion. He has worked hard to learn when to stop drawing. When he begins a new piece he knows that he will be changed when it is done. He will not be the same person. A month is liable to pass in an unbroken fit of daily concentration.

He has learned to rest. Even the creator of the universe needed a break before setting natural laws into motion. Drawing is like praying, he says. He has his rituals. In times past he would listen to music constantly, absorbed through headphones, fixing his artist's gaze into the precise impressions he refines with an eye for metaphysics and a multidisciplinary skill set with a variety of technical pencils fit for architects, also rendering his 2D work into sculpture, installation and digital art.

But for "Yuka," he revised his practice. He drew in silence. For the months that he trained his eyes to draw his latest series, he did not listen to music at all. It was a revelation. And the result is apparent when his works come into focus. They are meticulously crafted specimens of both contemporary and timeless iconographies, cinematographic narratives staging children's games to comment on the cerebral simulacra of worldly life, encompassing symbolist mysticism from the Kabbalah to Gnosticism, blending Japanese aesthetics with Turkish nostalgia.

To envision form and emptiness

The art of Yalçıntaş interacts with levels of mental cognition beyond common sense and ordinary consciousness towards what neuroscientists understand as the interconnected parts of the brain responsible for inner contemplation, called the "Default Mode Network." He draws from esoteric signs that induce meditative effects, triggering inward reflection guided by his self-reflexive awareness of the thin facades of perception, the light, truly weightless foundation of existence, the shallow ground of being.

In other words, Yalçıntaş employs the metaphor of "Yuka" to question the dominant, materialist paradigm that is endemic to unchecked, global-warming capitalism, which forwards that reality is a construct, more, that it is fully automatic and mostly void. Instead, a more apt metaphor, however archaic from the ancient beliefs of India and Mexico as only two examples, realize creation as more of an act, a dance, an artwork. 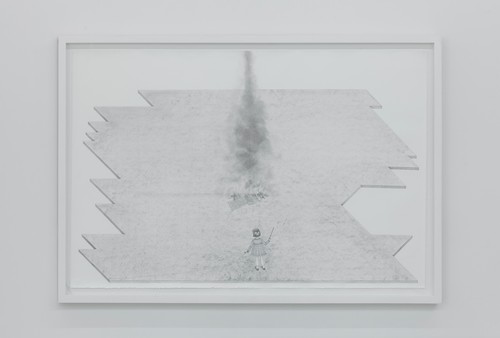 The proponents of "visionary art" are essentially advocates of alternative ways of being in the visible and invisible multiverse. They have sought to relay the enlightening and mystifying facets of creative existence through technical advances and age-old crafts that color and shape a vitalized, personal, cosmic experience of consciousness.

Surrealism and Dada renewed the Visionary spirit in Western art. Yet, where Surrealism discarded the raw materials of shamanistic exploration and Dada sought to slough off reason, Visionary artists came full circle, not as another reactionary interwar ideology, but to reunite local symbols from cultures around the world with universal wisdom.

From the 15th century Dutch draftsman Hieronymus Bosch to the Maltese painter Laurence Caruana, countless visual storytellers of all kinds are considered visionary when they convey the image-language of the collective mind, towards an evocation of what the comparative mythologist Joseph Campbell coined as the "monomyth," framing the combined likeness of the world soul through a global harmony of images, archetypes, myths, religions and philosophies shared and developed throughout history.

The origins of an artist's language

床 is the Japanese kanji ideogram for "Yuka," which Yalçıntaş refashioned out of seven pieces of white string, and hung under the window in the stairwell leading to the gallery space at Pi Artworks Istanbul. Yalçıntaş studied Japanese for the last eight months to learn how its grammar and roots are shared with Turkish, his mother tongue. He cross-analyzed the Turkish philology of "yufka" (thin flour) with Mongolian, Finnish, and the extant Anatolian usage of "yuka" for a shallow plane. He broke down each stroke of the "Yuka" kanji as the words for tree and roof to explain its definition as the wooden floor of old Japanese homes.

In his words, Yalçıntaş uses childlike illustration aesthetics as a language. He has a house style all his own, reminiscent of the naive portraits and cartographies drawn by characters from the films of Wes Anderson, and in a certain light he could very well be one. He strategizes deftly and arranges orderings of his self-curated methods of madness like a precocious prodigy with a preternatural instinct for "white cube" installations. By the Pi gallery door, a monitor plays a video on repeat, framing Yalçıntaş in its infinite blankness, the empty canvas slowly occupied prior to the opening of "Yuka."

Yalçıntaş always starts his drawings from the ground up. But his exacting, geometrical interpretations of flooring are curiously suspended, outlined into a context of spatial abstraction, floating as in zero gravity, or via a digital matrix. Linguistic fascinations run throughout his work and into his well-rounded approach to self-education. He is quick to talk about Turkish words like "otur," literally, "sit," often used as a verbal synonym for "reside," because, as he clarified, Turks were originally Central Asian steppe nomads who sat on the carpeted floors of tents. For him and for his ancestors, the ground is integral to settlement, urbanization, play and death.

With an eye for minimalism, Yalçıntaş bases his figurative approach on the main, overarching concept that he intends to represent, hanging strings to emulate lines on the page, also repeating patterns like open pools to muse on water, fire, air and earth. He abandons normative dualities like interior and exterior. To him, the floor of a home and the soil outdoors are one and the same. In a related manner, he notices how his thoughts are seamless between Turkish and Japanese grammars, whereas English requires another mentality entirely. 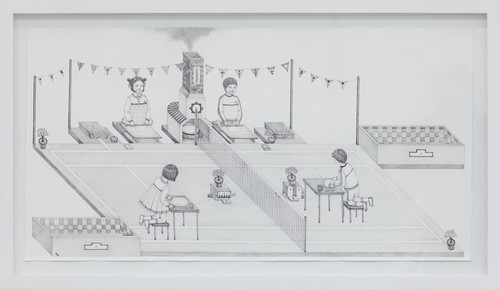 His tendency to interrelate points of reference connects "Yuka" with his first solo show, "Causa Sui," a Latin reference to Spinoza. It opened at Pi Artworks Istanbul in 2016 to center an earlier version of his piece, "Broken Altar," chronicling the transformation of a four-sided, pyramidal human face. It is a 3-dimensional fixation on the symmetry and disintegration of the four directions, also depicted in shades of grey. The mandalic infinitude and focal nucleus of the complementary drawing recalls the emergence of matter, often described as an unthinkably hot, dense point, one that Turkic shamans, ancient Egyptians, medieval Kabbalists and modern astrophysicists all agree initiated the expansion of the universe.

A child and his constellations

"It started with children's books. I went to a boarding school. I always used to go to the library and look at pictures. Those images stayed in my mind," said Yalçıntaş, whose knack for visual literacy is as encyclopedic as it is unique to his mild-mannered, lucid personality. "I saw that there was a connection between children's games and rituals. In the past, they didn't separate religion, science and art. After the Renaissance, these separations came to the West."

Yalçıntaş recognized a metaphor for all of human behavior in children's games. His works are optical illusions in the spirit of a kind of representational, Escher-like op-art. In order to show the shallow, thin, "Yuka" degree of thickness in his depictions of the floating ground layer on which his figures and scenes stand, he scales his paper medium to a certain size. The effect is like a board game, only his deft figurative realism contrasted within a hyper-logical fantasy is unsettling, like walking into a story by Lewis Carroll.

"I combine Jewish mysticism, shamanism, Japanese and Far Eastern cultures together with Turkish miniatures. In architecture, you have to destroy to build. Afterwards, creation comes with stories, with people who will have memories there. Destruction is the first step," said Yalçıntaş, who sees art gallery visits as a kind of game where people move between squares and cubes in search of an object, whether conceptual or material, to grasp. "I give myself rules. Then, a few years a later, I can also destroy those rules."