Universe on canvas through symbolism and mysticism 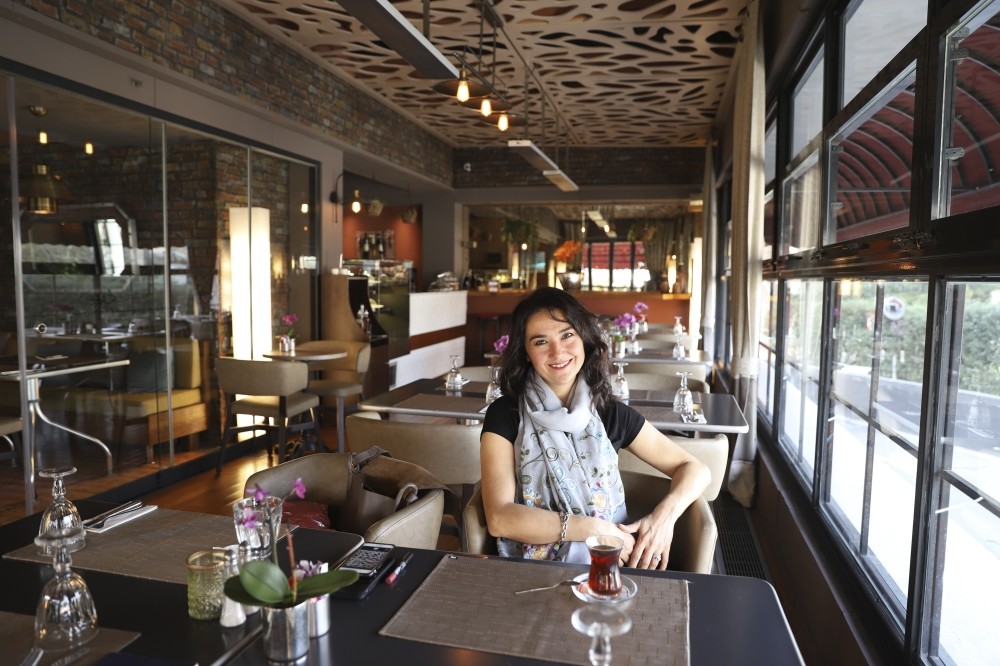 Artist Gülay Kakşi Okay, who plays with symbolic and mystic figures in her works, will wow art lovers with two personal exhibitions and a group exhibition this year at home and abroad

Working on her pieces, Okay endeavors to understand and interpret the place of humankind in the universe without attaching great importance to herself as a living creature. With such an attitude, she tries to capture the moment temporally and reflect it on the canvas for art lovers. Kakşi's journey started with her education at Moda Vocational High School for Girls. She then went on to the Painting Department of Marmara University with the guidance of a high school teacher of hers. "In fact, I was not interested in classical painting at first. I was dreaming about graphic design, which was quite popular then. However, I was accepted to the painting department. After graduation, I started to work as the assistant of painter İsmail Acar. At Acar's workshop, I learned many things, most of which were not taught at the faculty. There were Iranian artists at the workshop. They taught me how to use a brush. They are fantastically skillful in handcrafts. For a long time, I watched them blending colors and using the brush. When I got behind the canvas after a lot of observing, I successfully reproduced a Michelangelo painting thanks to those techniques I observed," she notes.

Kakşi started to make money by making wall murals with İsmail Acar. "We created interior murals for the houses of many celebrities. I was making those to set my style and earn a living. This was my first step in professional art as it is not possible for everyone to hold an exhibition. The first time I faced this truth was with my graduation exhibition in the last year of university. One of the professors didn't allow us to exhibit our graduation pieces. Thus, I held an independent exhibition at Haydarpaşa Station with three other girls from the faculty. That was our first exhibition. It was both a protest stance and the first exhibition held at Haydarpaşa Station," she says. 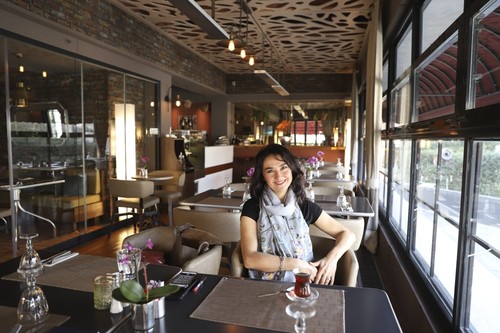 Gülay Kakşi Okay is a painter inspired by the circle of life, as well as the unknown realms like magic, prophecy and ciphers.

Holding an exhibition is not easy for fresh graduates and young artists in general. "The biggest problem with art galleries is that they don't give chances to young artists. Rather, they prefer to exhibit the works of more popular artists whose works are easily purchased at the market. I somehow see that there are financial concerns behind this attitude; however, this is a major disadvantage for young artists. In the first 10 years after graduation, artists remain in limbo, in between earning a living and performing their art," she explains when talking about the behind the scenes world of the art market.

One can easily assume that, in the given circumstances, the art scene is open to the wealthy and may exert hardships on others. "Yes, indeed," she says. "It definitely does. However, most of our friends who had the chance to open their own places and who didn't face financial difficulties have disappeared from the art scene. Maybe, difficulties nourish the artist in a way."

It is a long-lasting discussion if art has to have the healing power to transform society. Kakşi is certain about this. "Society always needs artists as art has [and must have] a regenerative and healing effect on individuals. The artist, on the other hand, should maintain a holistic attitude and its existence should be seen at a whole work. An understanding of art, which is made with popularity concerns and consumed up in a flash, is a problematic one. The curative and holistic characteristics of art must be conserved. Artists shouldn't keep a distance from the visitors who come to see their work. They should easily ask questions of the artist and communicate so that the curative effect of art arises. The artist shouldn't create a yawning gap between the public and art."

The artist, whose enthusiasm can be seen in her eyes, attaches utmost importance in creating a bridge between art and art lovers. "Hearing about the comments of the visitors and how they feel upon seeing my work is really important for me as it's the painting that chooses its owner. When it comes to me, of course, my canvas always has reflections from my existence. I don't create expressive stuff. I don't render an already existing object. I create modern and abstract pieces. What I reflect on the canvas is absolutely my inner world. Listening and witnessing about the reflections of my work on an art lover also contributes to my personal improvement. This way my inner world flourishes. Even though the feeling of an observer is different from my inner feelings reflected on the canvas, it is the feelings of the spectator that really matters. Hence, the spectator also joins in the creative process. This is how art serves society in a way. Sometimes in an informative way, sometimes as a visual or sometimes just with the feelings it leaves." 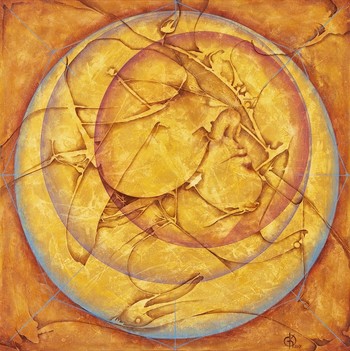 "They have asked me about the artists I am inspired by for years. The answer is, none. Every single artist has created masterpieces in their areas, in their own times throughout history. There is one single one that influences me, however, it is not him being an artist that inspires me. It is [Leonardo] Da Vinci, who was a doctor, engineer, artist and sculptor at the same time. He was a polymath who could transfer his knowledge of mechanic and anatomy into drawing. Everyone, other than him, makes their art within their own period," she says.

Artists are the fruits of their own time. "Ultimately, I also make art in my own period. There will be a generation after me. By the way, I find the new generation quite skillful. They are within easy reach of all facilities. Rather, they live virtual lives. However, they are so skillful. They just lack passion and resistance. As they can easily reach everything and were born into a consumption culture, it is rather difficult for them to be successful, but I have to say that they are much more skillful than our generation. I visit art fairs so often. I came across so many successful pieces by young artists, however, there is a problem. Due to the interaction opportunity offered by social media, there are so many replicas. There are so many similar works, especially in the expressive and hyperrealist style. Such a deep interaction sabotages originality at some point. As the mind saves an image and duplicates some part of that consciously or unconsciously throughout the recreation, it is getting more and more difficult to create something brand new. Staying away from interaction on social media is the only means of escape from this situation. Young artists don't look at nature. They cannot see the miracle in the blossom of a flower. They are unfamiliar with the energy that comes from walking on the soil. We are not unique as we are not free," she says on how problematic is to live in this haze.

Kakşi's art is obviously fed by mysteries, charms and mysticism. "Humankind was bitten by the bug of magic and fortune in ancient times. Science studies the universe all the time and it will go on doing so. Studies are being conducted on the existence of different dimensions and parallel times. Everyone interprets these dimensions within the light of their own belief and philosophy. For example, there is no concept of time. It is humankind who described time and divided it into periods. Time descriptions of different universes may be different from each other as well. Humankind's curiosity for the invisible world preserved the mystery and appeal of such issues and they sustained becoming subjective all the time," she said, highlighting how curiosity is at the center of her mind and went on to explain: "When we look at the whole, so many biological entities simultaneously share the universe. Personally, I believe that there are more creatures in the universe than we know. Naturally, they all have to be in connection with each other. This gives a way for an energy release. Charms and magic may be practiced before or after the time we know or out of it. The energy accumulated at one spot in the universe inspires me in some way as an artist."

GEOMETRY IN THE CORE

The artist uses round shapes and circles as everything in the universe is round or elliptic. "The planets are as part of a circular cycle. The life itself is circular as well. Although the lifetime is over, life starts again. This is a cycle in which so many people believe and which can be called as a heaven-hell or reincarnation. All mystic narratives are concealed with symbols. As I'm a symbolist artist, I like using triangles in addition to circles. Triangles symbolize birth, life and death. In fact, geometry represents the very core of life itself for me. Interestingly enough, I don't consciously choose which color to use after the first draft of my work is completed and starts to stand with its outlines. The canvas whispers to me which color it wants."

CODES OF THE UNIVERSE

"Another item I use so often in my work is ciphers. Humankind produced codes and ciphers to protect knowledge from being destroyed during wars. I find such things mysterious. They consist of letters, numbers or symbols. I try to establish a bond between the spectator and me via these ciphers. To sum up, nature, life, charms, unknowns and symbols, the things that I both fight and make peace with constituting the subject of my work," she concluded.

Portrait of the artist

Born in Rize in 1975, Gülay Kakşi Okay graduated from the painting department of Kadıköy Vocational School for Girls in 1991 and the painting department of Marmara University Faculty of Fine Arts in 1997. Educated by master figures such as Tayfun Erdoğmuş, Nevzat Yüzbaşıoğlu, Murtaza Fidan, Mustafa Pilevneli at university, Kakşi experienced the artistic path of masters such as İsmail Acar, Ertuğrul Ateş and Tayfun Erdoğmuş by serving as an assistant for them for many years. Holding nine personal exhibitions until now, the artist has also participated in nine group exhibitions. With her paintings and wall paintings displayed around 30 venues, Kakşi has succeeded in making a difference as an artist.