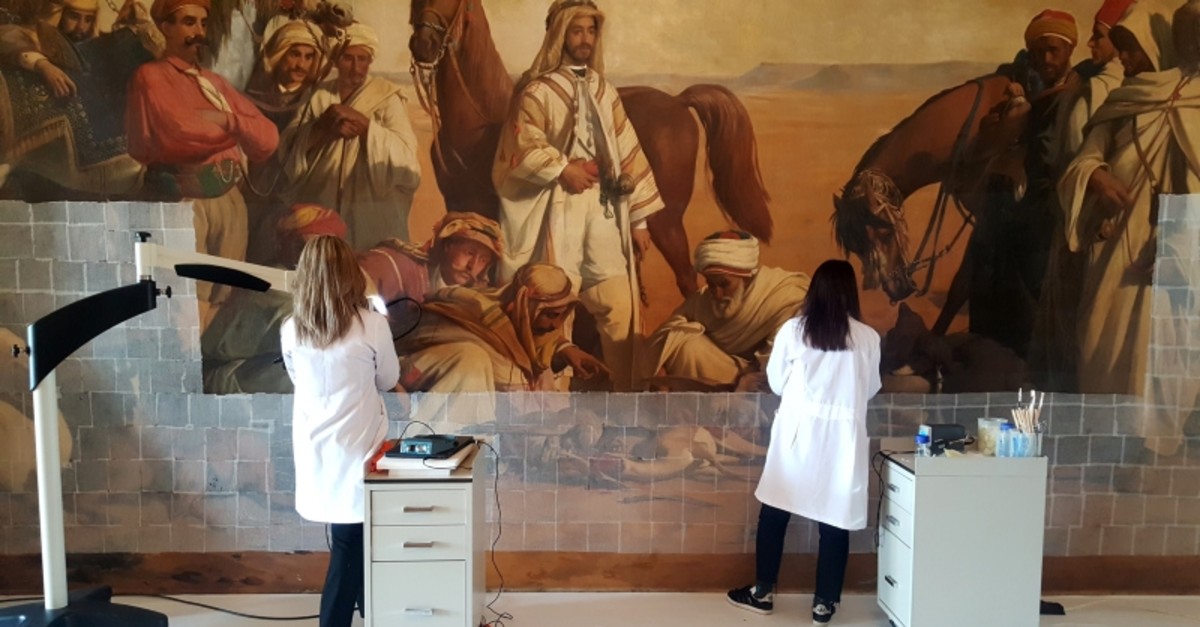 A 154-year-old Orientalist painting by French artist Felix-Auguste Clement, the largest of its kind in Turkey, will go on display in Istanbul in November after restoration works are complete, the head of the Presidential Administration of National Palaces said Thursday.

Clement, who is known for his Orientalist oil paintings, complete the work depicting a hunting scene in an Egyptian desert in 1865. .

The painting, originally named "The gazelle hunt of Prince Halim in the Gatah desert: the share of the hound dog," portrays 13 men dismounted from their horses, standing by a wounded gazelle in the middle of the desert.

The art piece, which was painted on a 35-square-meter canvas, had been in Sait Halim Pasha Mansion in the Sarıyer district on Istanbul's European side before the Presidential Administration of National Palaces took it down for restoration in November 2018.

Administration Chairman Yasin Yıldız said once restoration works are completed, the painting will be displayed at the Painting Museum within the Dolmabahçe Palace compound in Beşiktaş district.

"I think it would be an important service for the historical heritage of our country to bring such a work together with art lovers," Yıldız said, adding that the painting is referred to as "enchanted" since it hasn't been on display for a long time.

Yıldız said that the khedives who ruled in Egypt, then an autonomous tributary state of the empire, produced significant cultural works to Ottoman lands, such as mansions built in Istanbul and works of art.

"This painting is one of the most important works of art in terms of the Ottoman-Egyptian relations in the last period of the Ottoman Empire and a significant symbol of the role of khedives in Ottoman life," Yıldız said.

Yıldız said that a painting of this size with years of history requires meticulous restoration, underscoring that an expert team has been working on the painting from the very beginning when it was carefully transported from the mansion to the museum.

He added that the painting has a unique artistic framework that is the same age as the work itself and it is also being restored.