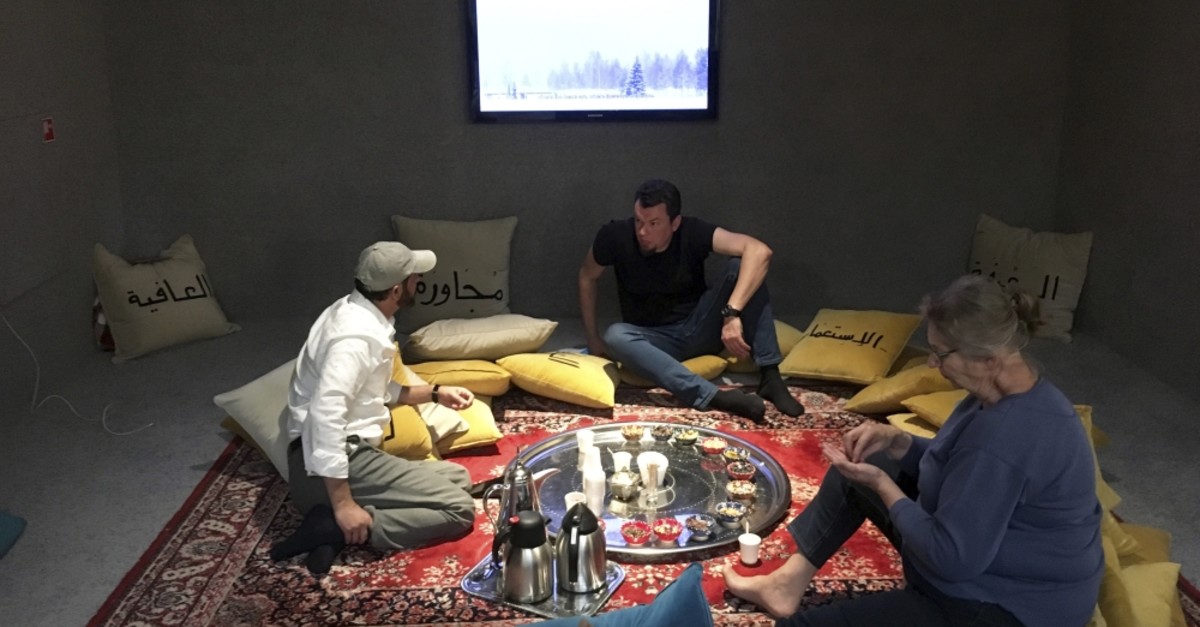 The Van Abbe Museum is hosting a group show that aims to create an alternative historical narrative, with works by Natalia Pershina-Jakimanskaya, Naeem Mohaiemen and the artistic duo Sandi Hilal & Alessandro Petti

I was in Japan when I heard about the upcoming "Positions" group show of the Van Abbe Museum in Eindhoven. This got me quite excited because I was going to see some of the artists whom I have been following for a while but had never seen their works in person. Although it took me a few months to pay a visit to the museum, it was well worth the wait in the end.

"Positions" is a sequence of solo exhibitions that has occupied the galleries of the Van Abbe Museum's old building. The series is a platform to explore and introduce the most compelling contemporary visual, object-based and immaterial art approaches to the local and international public in the Netherlands. Last year, I had a chance to write about the "Positions #3" where Pakistani artist Maryam Jafri was taking part.

Is it possible to create an alternative historical narrative? What happens if the political "other" wants to do this? How do you deal with the harsh political atmosphere that surrounds us? And a famous question from one of my favorite thinkers Gayatri Chakravorty Spivak, "Can the subaltern speak?" These were some of the questions I had in mind during my visit to the show. 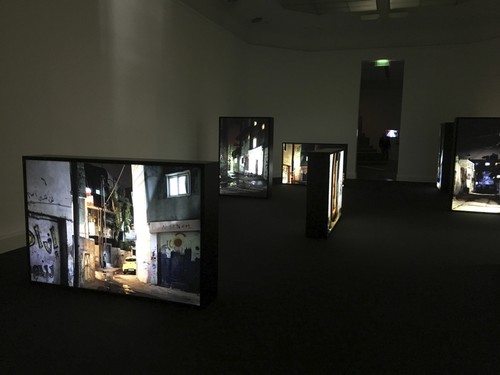 The three artists are creating a new fact-based historical fictional narrative from fresh and new points of view. By focusing on the situation of refugees in Amsterdam and Bethlehem, they seek to turn historical failures and contemporary strife into learning situations from which a viewer can find new inspiration. Together, the artists give us a clue about the continuous human presence in an uncertain world and how new solutions and possibilities are emerging. The show will be on display until April 28 at Van Abbemuseum in Eindhoven.

Gluklya, Naeem Mohaiemen, Sandi Hilal and Alessandro Petti share a link to art as activism, and all use art as a basis to talk about the pressures produced by the burdens of history, injustice, and political change. They tell stories about particular parts of the world with film, drawings, architecture, the archive, texts, education, and fashion.

Imagine a teahouse in the middle of an art museum, it is more possible to encounter a cafe but this show welcomes you with a teahouse, Al Madafeh/Living room: the right to host and to be hosted, (2016-ongoing) running by an Afghani-Dutch artist Shefik as part of Hilal and Petti's exhibition.

The coordinator invites you to sit down on pillows where Arabic words are written - A Moroccan origin steward translated some of the words, such as almaerifuh (knowledge), inhaa' alistismar (decolonization). As you sit down he asks you what type of tea you would like to drink, I went for lemongrass tea. While you are drinking your tea you can also taste some nuts placed on the circular aluminum floor table. There was an interesting moment where we started to discuss the names of the nuts, which amazed both of us when we saw that some of them had the same names in Pashtu and Turkish. After a certain point more people started to join the teahouse and it became like a typical Turkish joke: A Dane, a Dutchman, an Afghani, a Turk and a Canadian sit in a teahouse to discuss identity politics and daily life racism around "them." I love these types of encounters.

After an impressive entrance, this show continues with the Russian artist Glukya's pretty dense placed site-specific work called "The Carnival of Oppressed Feelings Trying to Overcome Suffering," (2017) which is divided into different rooms. Glukya's work is centered on the former Amsterdam prison Bilmerbajes where she had a studio and had a chance to meet its residents, people who were seeking asylum in the Netherlands. The former prison became an asylum seeking center for refuges in Amsterdam. The artist initiated a carnival march that is one of the core traditional cultural events in the Netherlands but the people who are seen as others acted in this march. One of the groups who took part of is a collective called Wij Zijn Here (We Are Here) is a group of refugees in Amsterdam that do not get any housing provided by the government but also are not allowed to work and therefore live on the street. In the video, we see the group that gathered with different clothes closer to the theme of the carnival. The artist tries to create attention on the inhumane situation that they have to live invisible, by no longer hiding but showing the situation of refugees that are out of procedure in the Netherlands.

Palestinian artist Sandra Hilal and Italian artist's Alessandro Petti's works are distributed to seven different rooms. However, I would like to write about a specific one that impressed me the most. The work is called "Refugee Heritage part I and part II," (2015-ongoing). The Nakba event, which drove Palestinians from their homes, started in 1947. Since then most Palestinians have been defined as refugees or remain homelessness. When you talk about returning home with those who were forced to leave, the conversation is a dead end in the political context we have now.

The duo artist demands return and decolonization which are entangled concepts. "We cannot think about decolonization without return." Part two depicts 44 books placed on pedestals that present the 44 villages of origin of the Palestinians living in the Dheisheh refugee camp, which is just a few kilometers away. When you open the books, you see documentation of each village and at the end of the book, why and when the Palestinians were forced to leave the village. Part one is placed just next to the room of part two. Part one shows eight double-sided light boxes that depict the refugee camps at night - built with the intention of temporality. You can observe the streets and see the details like the images of martyrdom on the walls or the unfinished house walls. After experiencing the two parts of the work you realize the differences in between them. Part one is taking place in a refugee camp on the night which is forgotten and ignored and part two is in a room that is lit very well and the books are placed on concrete pedestals. I think that even though concrete is a strong material, it still doesn't have a root. The title of the project seeks to deploy the potential for heritage to be mobilized as an agent of political transformation through making an application to UNESCO accompanied by a photographic dossier that captures the life and richness of the camps. The artist's aims, in the end, are not to get UNESCO's approval, but to initiate a needed conversation about the "permanent temporariness of refugee camps."

Naeem Mohaiemen is an artist from Bangladesh and he defines himself as a historian. You immediately comprehend why he calls himself as a historian after watching the 90-minute film, "Two Meetings and a Funeral" (2017). Mohaiemen works with archival materials from historical moments that relate to his subjects. As I entered the space, I saw a quote, "The Third World was not a place, but a project" on the three-channel installation from Vijay Prashad, which immediately summarizes the whole film's theme and the historical era that the artist is focusing on, the last 50 years. The film explores the efforts of the Non-Aligned Movement's (NAM) to navigate a "third way" contrary to Euro-American dominance in world politics and how it was shredded behind the scenes by the parallel actors in the "Petrodollar-driven Islamic Bloc" countries.

The second 90-minute film "United Red Army ("The Young Man Was, Part I)" (2011) depicts another historical moment that took place in recent decades. A group of Japanese hijackers, who were part of the Red Army, land in Bangladesh with a plane that has American passengers in it. The hijackers had taken over the airplane for the sake of the Palestinians, assuming that the country they landed in was an Islamic republic. What they did not know is that the country they were in had in fact gone through several military coups in the last couple of years and was in the midst of an ongoing coup that was initiated by a leftist group within the army. Instead of helping the Japanese Red Army's plan of enacting the "Third World Revolution," the actual Third World hits back surprisingly, leaving the hijackers helpless.