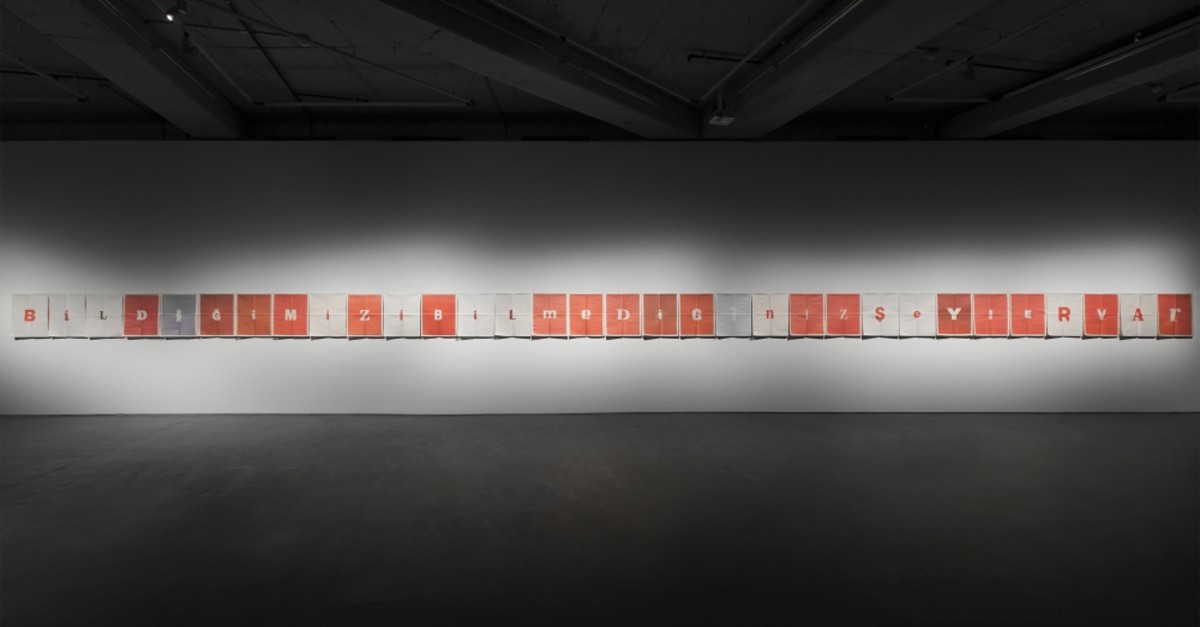 ‘Ses-li Harfler / Ses-siz Harfler' is Turkish for ‘letters with sound, letters without sound,' or vowels and consonants. It is the untranslated title of the current exhibition by Frankfurt-based artist duo Özlem Günyol and Mustafa Kunt, who critique media and currency with linguistic inventions. On March 23, they will speak at Dirimart during a book launch

If all of language, and text in particular, is two-faced, or multifaceted in a duplicitous sense, then its writing, reading and interpretation is essentially a creative act. When the Algerian-born French philosopher Jacques Derrida formulated his critique of 20th century Western thought, coining the term deconstruction, he emphasized the underlying problems of language, and in doing so, sought to demystify the enduring questions of immigration and the nation-state. As the son of Arabic-speaking Jews, he came of age during the epoch-making era of postcolonial liberation in North Africa, and would draw from its intellectual movements to inform the revolutionary principles of reason and dialectic that run through his often opaque work.

By the end of 1990s, a quarter century after the book "Of Grammatology" launched Derrida into the status of academic iconoclast, a pair of sculpture students from Haceteppe University in Ankara went to the Stadelschule in Frankfurt, and considered making art based on themes that Derrida had long posed, and which continue to overwhelm Europe and the world. They did it their way, in the manner of a spatial interrogation, with the meaning and condition of space as a conceptual phenomenon. They began to reconfigure the syntax of emptiness and occupation in countless art halls and public venues, often moving between German and Turkish cultures, working through the languages, geographies and societies of the two peoples whose peoples, lives and histories are profoundly intertwined.

The gallery and its double

Where the last days of winter rain down through the grit of roadways and neighborhoods under construction from Taksim to Dolapdere, a pivotal standoff in the art history of Istanbul is taking place. Dirimart stands sleek, housed in a corporate building, flagged by a yellow "D" formed of a bracket and parentheses. It is down the street from the world-class Pilevneli, and will be next door to the new museum project by Arter, slated to open in September of 2019, which will fundamentally redraw the art map of the city. Amid the complex of coffee breaks and office humdrum, its heavy glass door swings out to reveal an untitled artwork by Özlem Günyol and Mustafa Kunt that sets the tone for their distinctive, contemporary ideas and aesthetics.

"Untitled" (2019) appears like a string theory of constellations quite beautifully resembling the cosmic microwave background that radio astronomers detected in 1964, leading to the earliest evidence for the Big Bang. 225 centimeters wide, the inkjet print on Ultra Smooth 305g/m2 Hahnemühle Photo Rag paper conveys clustered galactic visions of the universe described, expanding from the rich complexities at its center to the more vacant perimeter. It imprints a wordless alphabet of digital type, a critical experiment in asemic writing, a postmodern calligraphy delicately maneuvered across a meticulously crafted field of linear abstractions. 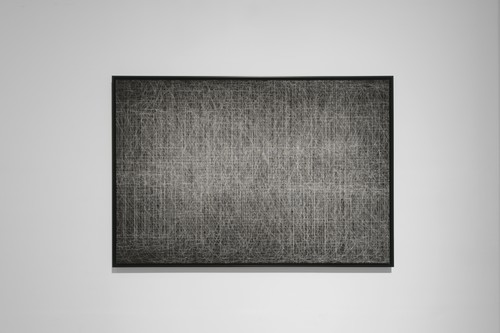 But there is a clear intent, an absolute meaning, and direct reference to the world and its unavoidably real, inevitably human imperfection in "Untitled". For all of the elegance, the exotic refinement of digitized art in the rigorous hands of Günyol and Kunt, the piece speaks to the social ill of total silence, of an untold blackout that, as depicted in the work, backdrops the chaos of scrambled communications. The causes and effects of manufactured incomprehensibility represent an aspect crucial to social development within bounded territory in the 21st century.

The emergence of real Orwellian doublespeak is generally confined beyond the rising, landlocked walls of North America and the EU. Its ideals of democracy and humanitarianism defy the first law of thermodynamics, made up out of thin air, they simultaneously self-destruct when transplanted with ulterior, pseudo-imperialistic motives. And conversely, within the murmuring heart of Western civilization, the prescient discourse of Aldous Huxley bears fruit as media saturation fulfills the same goal of miseducation and distraction in the public sector. In line with the trickster mentality of contemporary art, with its masked concepts and deceptive magic, the soundless and audible are visualized with the clearest focus on Dirimart's main gallery floor.

The letter and its power

Individuated vowels and consonants float in a virtual area from the digital video projection, "Prohibited Letters," which contrasts with "Untitled" by its whiteout background. Turkish letters seem to drift aimlessly, out of context, behind the veil of mere appearances. The letters are meaningless when separate, yet they threaten to come together to form words with the potency to catalyze irreverent social action. Last year, from March 29 to September 28, the duo intervened at Yanköşe, a not-for-profit art platform visible at Istanbul's tramline terminal station in Kabataş. It was their most recent public project, for which they displayed a piece titled "SEPARATELYTOGETHER", consisting of textual rearrangements drawn from the latest Constitution of the Republic of Turkey.

As the mad genius of French letters, Arthur Rimbaud, once inked, "A poet makes himself a visionary through a long, boundless, and systematized disorganization of all the senses." A twin romance of disillusion and goodwill pervades the Dada poetics of Günyol and Kunt, as in the spirit of the deconstructionist, uniquely equipped with the mind for applied sociocultural criticism. With an almost scientific, truely crafted grasp of material and the physical elements of power, they retain a creative optimism enough to experiment confidently, toward a revision of the basic forms that comprise the traditions, patterns and motifs of human behavior and its establishment. "Prohibited Letters" points to the indefinite and unresolved state of having been scattered, like dust particles in the wind, yet to reconvene with any discernible unity and sense. Its isolated letters hover suspended, singled out in unceasing motion, haphazardly independent, like that of the general public unleashed at a party, a mall, or museum. They wander busily, groundless and displaced, bouncing off the impermeable edges and back into the center, on repeat, autopiloted. Such unthinking status quo shifting through open space is transformed by Günyol and Kunt, from what looks like emptiness into a raw expression of freedom. 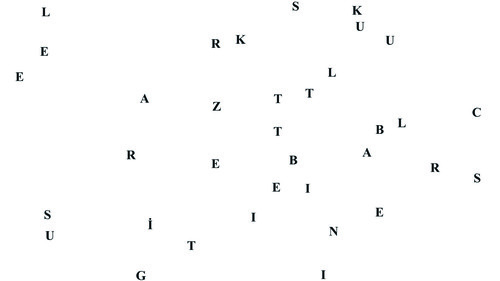 Disciplined as traditional, academic sculptors, yet dampened by material and social limitations in Ankara, the duo found promise in Germany. Inspired by trans-media approaches, they stood on the shoulders of giants. Günyol studied under Ayşe Erkmen, the preeminent Turkish sculptor who is currently exhibiting three video works from the 2000s at Ariel Gallery under Riverrun cafe in Istanbul. In turn, Kunt studied under the legendary German photographer Wolfgang Tillmans, who compelled him to problematize and interact with his surroundings. Viscerally immersive with the local architecture, Günyol and Kunt repurposed the lone, unfinished pillar at Dirimart for "Deadlock" (2019), sculpting the words, "known" and "unknown" in metal around its corners, always a few letters out of sight, triggering endless avoidance.

The art and its makers

Günyol and Kunt made the seven artworks in the largest exhibition hall at Dirimart within the year for what is their second solo show together in Istanbul. Its trajectory encompasses the breadth of the Turkish media landscape with the complementary pieces, "There Are Things You Don't Know That We Know" (2019), and "M" (2019), the first of which spells out its Turkish title letter by letter, "B-İ-L-D-İ-Ğ-İ-M-i-Z-İ-B-İ-L-M-E-D-İ-Ğ-İ-N-İ-Z-Ş-E-Y-L-E-R-V-A-R." Each letter of the word is framed by layered sheets from a different Turkish newspaper, representing the spectrum of national biases. The pages adhere to the same sequence lengthwise as by depth, meaning that the spelling can be read horizontally as displayed and by flipping the top page. The length of the word reflects the agglutinative structure of Turkish. Its semantic construction comments on the nature of selective knowledge in the work of artists and writers. "M" refers to the word media, and also the Turkish for headline, "manşet". It showcases the painstaking research that Günyol and Kunt executed to convey a theme through an exhaustive catalog of word usages drawn from the front page headlines of newspapers for an entire year. Similarly, in 2006, the artist duo employed another protracted word when they strung up the one-word question as a temporary logo on the exterior of a Dresdner Bank which, in the original Turkish, read as, "Avrupa-lı-laş-tı-r-abil-di-k-leri-m-iz-de-n-mi-sin-iz?". It translates, "Are you one of those who we were able to become European?" With ample self reflection, the transnational art of Günyol and Kunt realizes the creation of knowledge as the answering of questions that go unasked because they are rather left unknown.