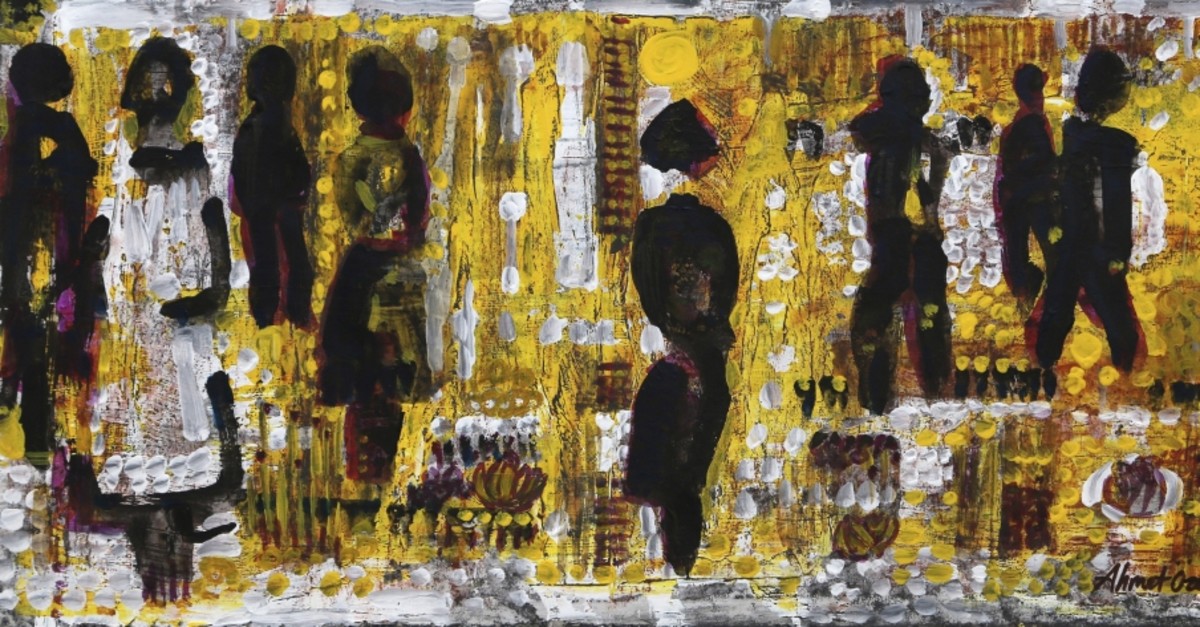 As an artist who has reflected the individual human journey on his canvases in an abstract style for many years, Ahmet Özel scrutinizes his own enlightenment with mythological arrangements in his latest exhibition ‘İç Güneş'

When you look at old photos of Istanbul, you will find the city more exotic in the 1970s. The city was alive like a busy market in those times, and many American cars road the streets. Back then, a high school teenager was getting out of Kabataş High School, where he was educated and walking to the coastal town of Fındıklı where his greatest delight was catching fish. However, he did not know that he was catching fish in the garden of the Istanbul State Academy of Fine Arts, now known as the Mimar Sinan Fine Arts University. One day, he left the garden and stepped inside the huge building behind him. Once he entered, he was mesmerized by an exhibition on display. He could not understand for a few minutes why these works of art were here, but then learned that it was the famous Turkish art academy.

That high school boy was gifted artist Ahmet Özel, and this was his first meeting with the Istanbul State Academy of Fine Arts, founded by renowned Turkish painting artist Osman Hamdi Bey as the first fine arts educational institution in Turkey. Özel does not come from an artistic family. He was the son of a migrant family that tried to sustain their lives under difficult conditions. But there was one sure thing: He had a talent for painting. Everyone thought him talented but no one directed him to a career in this field. It was his first meeting with the academy that motivated and encouraged him. Thereafter, Özel decided to receive an education in its magical atmosphere. He was not well prepared but took the entrance exams. As you can imagine, he succeeded and entered the world of painting.

Even if his first brush stroke on canvas was a chance, he took firm steps toward painting and became one of the most productive Turkish artists. I interviewed him concerning his latest exhibition "İç Güneş" ("Inner Sun"), which opened March 16 at Gallery Diani and on display until April 6, I found myself in an intense conversation in a minute. I was looking at a wise man with a cultural and informational accumulation of years. The more he talked, the more I became curious about his art and his perspective.

I learned the aforementioned details about his finding art and then wanted to hear about his style and themes. Before coming to the interview, I saw on the Internet that art critic Ruşen Eşref Yılmaz praised Özel's works. He said, "The painting of Ahmet Özel is a whole of polysemic phenomenon that implies the existence of human beings as part of the cosmic universe." While Özel was talking about his themes, his words reminded me of Yılmaz's comment. Özel was really into the individual journey of humans. He said that he focused on figures in his paintings until the '90s. Then, he inclined to the theme of the sky. Özel evaluates this inclination as a concept that developed in him to understand the universe and creation. The artist, then, started to reflect meteors on his canvas. These meteors turned into angels and mother figures and finally light. However, Özel highlights that he always scrutinized the creation of the universe and human beings with an intuition-based dialect and reflected it isolated from time and space in a mythological dimension with mystical arrangements. 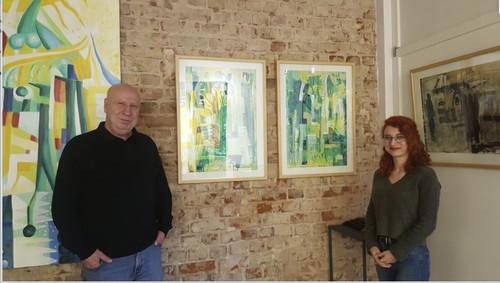 Noting that he always begins to paint without any preparation, Özel sees his works as a mirror to himself. He stressed that the only thing that he tries to do in his job is to reflect what he has inside. Performing his talent extemporaneously, he said: "I do not like to transfer something that has been completed in my mind. I like the improvisational process of painting. I do not want to destroy the excitement that it gives me."

As I saw his attachment to his art with such a deep desire while he was talking, my interest in learning about his ideas and feelings about famous artists increased. I could not wait and asked about figures that he admired. After this question, his eyes sparkled. The artist waited for a second and said that he is really moved especially by one artist's work although there are many others that he admires. This work was the Dutch Renaissance artist Pieter Bruegel's "The Blind Leading the Blind" (aka "The Parable of the Blind"). He said that he made a copy of this work during his academy years, and this painting became his source of inspiration as of that day. "Even if people do not know that, this painting stays as a frame in all of my productions," he emphasized.

At that very moment, Gallery Diani's founder Telga Südor Mendi interrupted the conversation with similar excitement. She said that she attended the comprehensive exhibition that the Kunsthistorisches Museum in Vienna has organized to mark the 450th anniversary of the death of Pieter Bruegel.

While she was mentioning how she was mesmerized by all the works of Bruegel, a rarity in the art world, Özel was listening to her admiringly. Then, he reminded the first moment that he saw "The Blind Leading the Blind," which was kept in the Museo di Capodimonte in Naples, Italy. When he was in Italy for education with a scholarship that he won, he visited the museum but did not know that his beloved piece was here. He said that he felt as if he encountered an old friend when first saw it and added that he watched it for half an hour at least to examine all the colors.

I saw that Özel and Mendi share the same taste in art and the same feelings. Therefore, it is not surprising for me to see that these two came together to open an exhibition. Indeed, they were planning to hold this exhibition for many years. When every detail was ready, they decided to take action. Özel works studiously in his solo exhibitions since he thinks that all works should describe him and they should be relatives. His latest exhibition, "İç Güneş," is also such a production. He chose every painting gingerly and prepared everything, even the frames carefully. Özel stressed that he tried to reflect humanity's own healing and light in this exhibition by using mythological elements and descriptions of various rituals.

Özel is an artist who sees himself as a part of society. For him, artists should not be considered leaders or pioneers. Therefore, I can assure you that you will witness the modesty of the artist at "İç Güneş" as well as the perfect brush strokes and the deep meanings behind the paintings, where you will accompany his own life epiphany through the abstract elements on display.