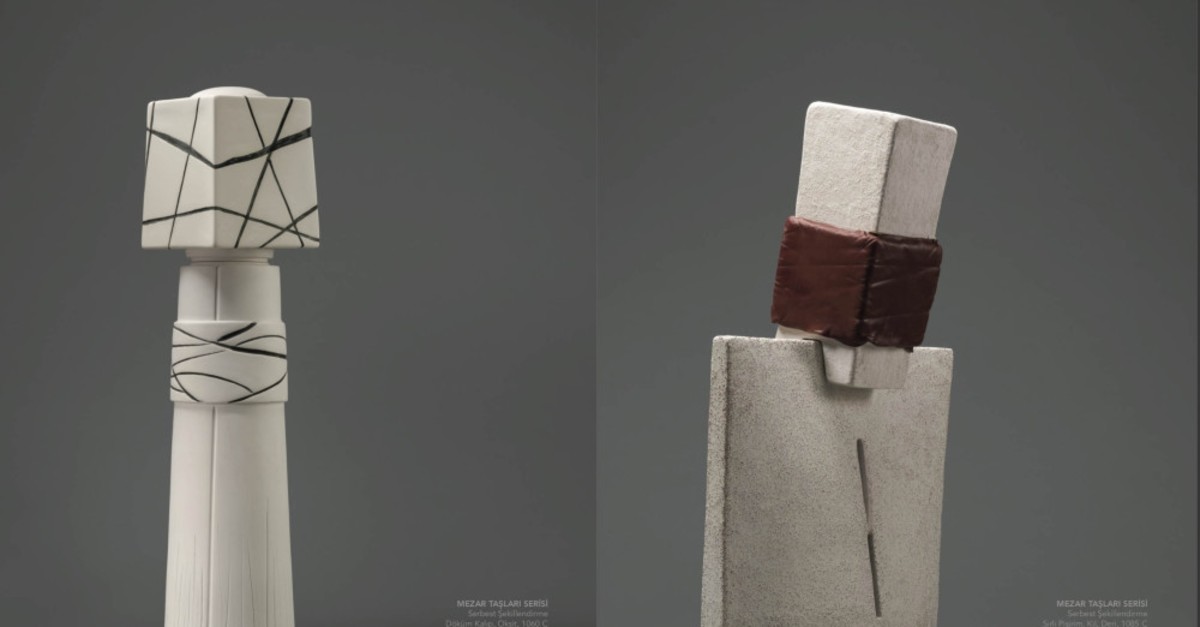 Inspired by Seljuk and Ottoman headstones in terms of color, shape and meaning, ceramic artist Ayşe Aysun Sandıkçıoğlu displays her reinterpretations in the historical and magical environment of the Theodosius Cistern

Under the Istanbul Metropolitan Municipality's Culture Inc. program, the sculpture exhibition "Araf" ("Purgatory"), which comprises of the interpretations of Ayşe Aysun Sandıkçıoğlu on Seljuk and Ottoman headstones, is waiting for art lovers at the Theodosius Cistern. Curated by Mehmet Lütfi Şen, the exhibition can be visited until April. 22.

Curator Mehmet Lütfi Şen explained that the exhibition was prepared by starting from a special area of the civilization's three-dimensional cultural heritage. Şen noted that the artist focused on the plastic values of Seljuk and Ottoman headstones as the theme. "This special project meets enthusiasts at the Theodosius Cistern, one of the most impressive historical buildings in Istanbul. The forms which are filtered out of history grow in the water of the cistern, turning into contemporary works of art, and their shadows become integrated with the 1600-year-old walls and the "Araf" project.

The artist spoke about her artistic journey, her touch on the historical forms and upcoming projects.

After graduating from Dokuz Eylül University's Fine Arts Faculty Ceramic-Glass Department, Sandıkçıoğlu completed her master's degree at the same university with a thesis entitled "Transformation of Military Music Ensemble Mehter, their Traditional Attire and Music Instruments into Ceramic Art Objects in Terms of Plastics" in 2009. As a guest of The City University of New York-Queens College, which declared 2011 as the year of Turkey, she participated in an exhibition in Flushing, New York between Nov. 19, 2011, and Jan. 19, 2012.

Having developed a special interest in the historical elements fed by the Seljuk and Ottoman cultural legacies, the artist is inspired by the headstone designs in these two civilizations. "As I have indicated in the preface of the exhibition catalog, the undeniable truth of existence is to be born and to die. Headstones are the journals that we erect in the soil by carving stones. We erect them opposite of the truth of disappearance so that they can witness the marching time from life to death. The idea of turning the headstones, which are the symbols of such a truth, into contemporary forms with their history did not occur in my mind in a minute. This idea was always there because it was a truth of life like being born," she said about what makes headstones an element of culture.

One of the driving powers behind the exhibition is the discourse and depth of titles and motifs on Ottoman headstones. "Every shape, symbol or object gives a different message. For example, there is a headstone belonging to a woman named Hanife Hanım from Istanbul. She died in 1735 during the birth of her baby. In her headstone, which is a naive reflection of Ottoman art, her baby was described. This headstone, one of a kind, contains some unnamed pains. I dedicate this work in my exhibition, which features pieces that I create by drawing inspiration from these kinds of headstones to my grandmother Esvet Sandıkçıoğlu, who died in 1945. She lost her life with her baby during birth like Hanife Hanım," she further noted.

While recreating the old shapes and form, Sandıkçıoğlu made detailed examinations. "The main perspective of my work in every period of my career is created by our history. Their focus has always been the civilizations that were present in these lands, where I was born and have been living. Surely, examination on site and observing one-to-one provide a great advantage in terms of touching and feeling. I am not an art historian, so, I did not confine myself with inventories and archives. The concept of my project comes to the forefront with values of forms. While creating the visual designs along with information, this is one of the important ways out that direct me," she noted.

During the process of reinterpreting, the artist focused on many angles: shape, form, color and meaning. "There are some factors that affect the design during the period of creating your project. This is sometimes a form and sometimes a color for me. Motifs should be used in order to emphasize when they are really needed. However, the plain, simple condition of statutes is more impressive most of the time."

"Araf," or "purgatory" in English. is actually a religious term, meaning the state of being in between hell and heaven. However, the name of the project is not referring to its religious meaning. The artist explained why she chose the name: "The project is named 'Araf,' meaning limbo. However, this name is not related to religious references. Your concept is generally determined when you focus on your works for the exhibition. As the works progress and are in the stage of formation, the statues find their own names. Then, you just respect these names. The period of concentration brings the name of your exhibition."

The completion of the project took years. "I can say that the project's period is between the end of 2010 and today. Surely, the daily rush necessarily moves you from the subject. Full-focus design, sketching, color sketching, modeling works and kiln drying come respectively. The proper design, material and form, then, become standing statues. The works in 'Araf' have been completed in two or three years. The statues of the exhibition turned into a work of art with the visual richness of the headstones and the potential energy of their feelings, aiming to build bridges between past and future in terms of culture and art."

Sandıkçıoğlu hinted at possible future projects she has been thinking about. "I have determined some concepts for my future exhibitions. My primary aim will be interpretations of old civilizations and Efe, the leaders of Turkish irregular soldiers from the Aegean Region, in the Republic period," she said.