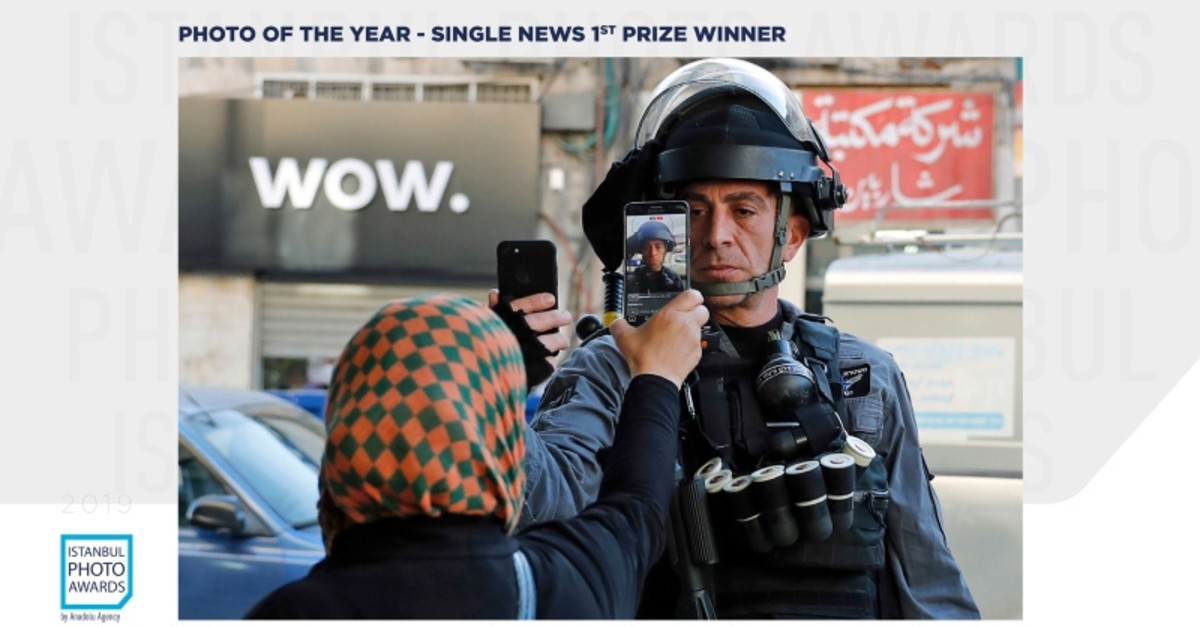 Agence France Presse (AFP) photojournalist Ahmad Gharabli's striking photo of a Palestinian woman and Israeli security officer taking photos of each other was chosen Photo of the Year 2019 in the Istanbul Photo Awards, organized by Anadolu Agency.

In the Single News category, 40-year-old Palestinian Gharabli's image shot on a Jerusalem street got top prize in the contest, held in Istanbul, Turkey's art and culture capital.

The Turkish Cooperation and Coordination Agency (TIKA) and Turkish Airlines sponsored the international news photo contest, where a jury of international experts picked the winners in all categories on April 19-23.

Deborah Copaken, an American author/photojournalist joined the jury for the first time this year as chairwoman.

"The addition of these phones make it kind of a universal statement about where we are in news gathering today," Copaken said.

"It is also a very good picture and it is a picture that has not been seen too much," said Marion Mertens, digital editor-in-chief of Paris Match, another jury member.

On this year's top prize-winning photo, Russian jury member Yuri Kozyrev from Russia, a photojournalist with Dutch-based NOOR Agency, who is also one of the jury members, said: "It is a powerful example of how narrative war has become more important than physical war due to the new technology."

Olza's photo shows a group of migrants jumping the U.S.-Mexico border at night.

"It's a really fascinating view of what happens to the migrants when they come across the border," Copaken said.

Elyxandro Cegarra, a freelancer, 41, got third prize in the same category, with his photo shot during the Yellow Vest protests against rising fuel taxes in Paris.

"The image we chose was of a woman on her knees, kind of crying out, she wasn't even wearing a Yellow Vest. And in that image, you understand the impetus of this entire movement," Copaken said.

Praising the second and third photos chosen by the jury, Mertens said: "Story is strong. Image and composition are strong. I think we had some high-quality photojournalism. We're happy about it."

In the Story News category, a series by Mexican photojournalist Guillermo Arias, 44, a regular contributor to Agence France Presse (AFP), got the top prize.

The series shows the perilous journey of thousands of Central American migrants to the U.S.

Forty-year-old Getty Images photographer Chris McGrath's series taken in the wake of the killing of Saudi journalist Jamal Khashoggi at the Saudi Consulate in Istanbul got second prize in the same category.

Third prize winner in the Story News category went to Indonesian-based freelancer Ulet Ifansasti for his photos showing the aftermath of the 2018 Sulawesi earthquake and tsunami.

In the Single Sports Category, German photojournalist Matzke Stefan, 56, got first prize for his photo showing big wave surfer Sebastian Steudtner of Germany experiencing a wipe-out on the famous Praia do Norte in Nazare, Portugal.

U.S.-based freelancer Terrell Groggins, 37, got second prize in the same category and Reuters photographer Lenoir Francois, 46, from Belgium, got third.

In the Story Sports category, the top prize went to Iranian freelancer Forough Alaei, 30, with her photos telling the story of a 22-year-old girl who disguised herself as a man to enter football stadiums.

The winning photos will be compiled in an annual book and will be shown at exhibits in Turkey and abroad throughout the year.

For a list of all the winners, visit: http://istanbulphotoawards.com/