The multidimensional transformation of Pera 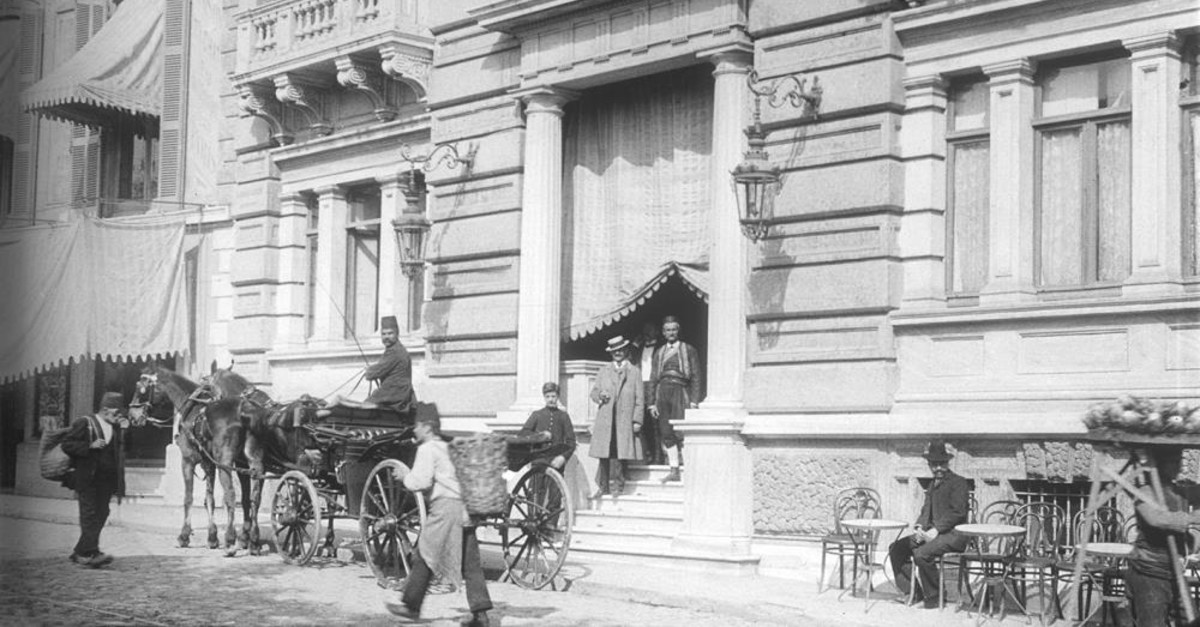 A photo showing old Bristol Hotel, which is used as Pera Museum now, from the u201cLooking from In-Betweenu201d exhibition.
by Daily Sabah Apr 30, 2019 12:10 am

The 19th century was a period of economic, social and physical transformations. Together with modernization, everyday life and places were reconstructed and urban residents got used to this transformation. While developments in the international transportation network, accommodation in line with the habits of foreigners coming to the city, shopping and entertainment demands affected the emergence of new places, an increase in imports changed the direction of consumer patterns.

This allowed Istanbul, especially the Pera district, to undergo a multidimensional transformation. Since the second half of the 19th century, Pera has had a unique character with its various entertainment and resting spaces. The character that the district, where many local and international actors meet, has been influenced by the dramatic change in the population structure in the next century, but it remained determinant for the transformation of the region.

Istanbul Research Institute's "Looking from In-Between" exhibition, which began on March 20, reveals Pera's transformation through photos and documentaries dating back to these periods. It turns its attention toward a certain section of Meşrutiyet Street – a segment between the present-day Istanbul Research Institute and Pera Museum of the Suna and İnan Kıraç Foundation – and seeks to capture an integrated view of Pera.

Curated and designed by Atölye Mil, the exhibition and its virtual reality (VR) design was developed by APOLLO. It brings together many materials, including photographs, documentaries, maps and objects, collected from the archives of the Istanbul Research Institute, Istanbul Metropolitan Municipality (İBB) Atatürk Library, Salt Research, Pera Palas, Çelik Gürsoy Foundation Istanbul Library, University of Harvard Library and Yapı Kredi Bank, along with private archives.

From the Bristol Hotel to the museum

In the exhibition, early 19th century engravings that document the times when Tepebaşı was a cemetery are accompanied by the entertaining photographs of the Playboy Club, which opened in the 1960s, when the city was the center of nightlife. The exhibition also offers the opportunity to experience the old Bristol Hotel as if you are in it with the VR technologies. The hotel was repurposed to serve as the Pera Museum in 2005.

This unique venue experience, which takes visitors on a 100-year journey in the multi-layered history of the Pera Museum building, refers to the technical drawings of the Bristol Hotel and the architectural styles, furniture and objects used in the same period hotels. The hotel tour, recreated with all forms, materials, colors and textures in the virtual environment, starts in the lobby. Within the scope of the tour, visitors can explore the resting room that houses the historical piano, the dining hall containing many details of the period, and the hotel room designed according to the comfort expectations at the end of the 19th century. They will also have an opportunity to see the works of the Orientalist Painting Collection of the Suna and İnan Kıraç Foundation on the hotel walls.

Rossolimo Apartment turns into the institute

The facade of the Rossolimo Apartment, which was built by the architect Guglielmo Semprini in the early 1900s, overlooking the Meşrutiyet Street, is a good example of the period with its neoclassical architectural details and ornaments. Renovated by architect Sinan Genim after years of use as a residence, Rossolimo Apartment was opened in 2007 as the Suna and İnan Kıraç Foundation Istanbul Research Institute.

Focusing on the area between the historic buildings of the Istanbul Research Institute and the Pera Museum, the exhibition focuses on many historical buildings from Rossolimo Apartment to Büyük Londra Hotel, from Pera Palas to Odakule, from Bristol Hotel to Tepebaşı Theater. The multi-layered identity of the area is brought to light with photographs and documents dating back to a period from the late 19th century to the end of the 20th century.

The renowned capital of the Roman, Byzantine and Ottoman civilizations, Istanbul is the foremost starting point in discovering its identity as a megalopolis, or "megacity," shaped over thousands of years, as well as in exploring the diverse cultural geographies surrounding the city. Therefore, Istanbul Research Institute follows the traces of civilization from the center toward the periphery, focusing on the cultural structure and the human profile, including Byzantine, Ottoman and the Republican periods of the city. In doing so, the institute aims as its main targets, to develop and support projects in light of these relevant research areas and to organize local and international conferences and other activities, consequently sharing the results with relevant institutions and the public through the media.