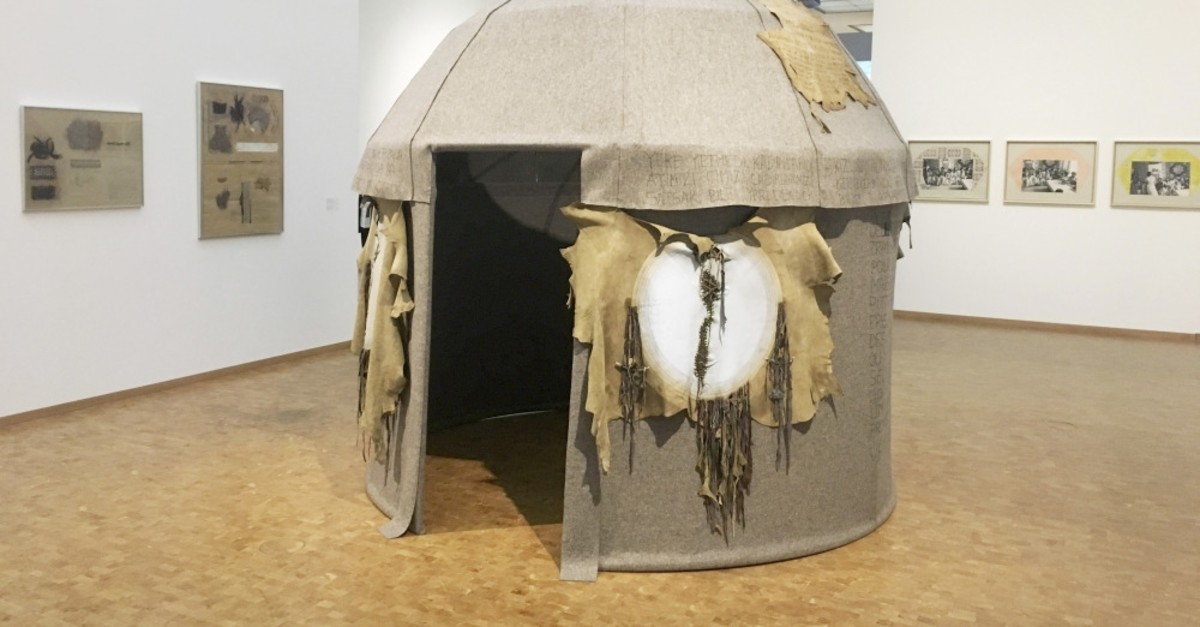 I am on a fully packed train that goes from Rotterdam to Cologne on a cold day but the sun shows its face from time to time. After a 10-minute search I find a place to sit and settle down. The first thing I do is the take out the Nil Yalter's book "Off Record," published by Arter in Istanbul as part of her solo show.

I still remember the feeling I had when I saw her work in person after only having seen it online or in books. I check the book again for the sentences I underlined before in order to prepare for the opening tonight, as I continue my journey of three hours. I arrived in Cologne a few hours before the opening of Nil Yalter's show "Exile is A Hard Job" at the Ludwig Museum.

The pioneer artist Nil Yalter's (born in Cairo in 1938) largest museum survey occupies the ground floor of Ludwig Museum. It is a marvelous opportunity to see Nil Yalter's early work and recent work together even though I had seen her recent work last year in Istanbul at her gallery, Galerist.

The artist exhibits her poster campaign "Exile is A Hard Job" (1983) that I had a chance to see a few years ago, this time the posters are spread across Cologne in all the languages spoken in the city, German, Turkish, Arabic, Russian and Polish by using the quote " Exile is A Hard Job " by Turkish poet Nazim Hikmet (1901-1963), who died in exile. It is a consequential gesture to take this piece out of the museum context in Yalter's case. Cologne hosts a lot of migrants and around 65,000 of them have Turkish roots. 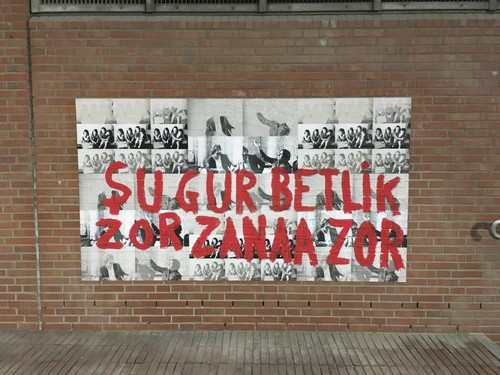 "Exile is A Hard Job" (1983) has another part that is placed in the museum. The collage depicts an excerpt from a poem which claims "working abroad means slavery." This body of work triggers lots of unexpected emotions for me that I cannot stop. Yalter placed the poem in the heart of the composition and we see the portraits that the artist took to create the sides of the collage piece where some portraits seem like they are exposed twice on the top of each other on negative film to unfold the doubled identity of the person who is in front of the camera. In between the photographs, there are triangular paintings, which are painted like marble and its veins; they together take the form of a monumental piece that is a tribute to the people who are in exile.

"Turkish Immigrants" (1977-2016) and "Immigrants" (2017) occupy the same space. "Turkish Immigrants" (1977) is a photo and painting series in frames divided into three sections on different walls. Yalter divided the frames into lower and upper parts. The lower part of the frame has photographs of immigrants in 1970s Europe with a look of Magnum Photos documentary in black and white. In the upper part of the frame her paintings have the

faces covered, all of them, every part is "absent" now. The only thing we see is the background, as Yalter didn't touch the nice 1960s wallpaper. This intervention evokes a sense of their identities being absent or as having no value. The people who were depicted in Yalter's work came as "Gastarbeiter" to provide economic progress for European countries that had lost most of their workforce during World War II. The artist confronts us with as though the '60s wallpaper had more identity than immigrants back then.

Yalter's, "Immigrants" (2017) consists of six monitors placed in a circle. Each monitor has a unique video aesthetic, placed as a circle that represents the archival value of that period. The installation creates an easier and interactive relationship with visitors because of its circular shape. "Immigrants's" (2017) circular shape represents the tension that never goes down in politics. Although they look like documentary films, their genres are in between documentary and fiction. For instance, in some videos, Yalter herself is present, helping the women in the videos make meatballs. In one video, we barely hear an interview with a Turkish worker in a suit. Interestingly, the interview is in Turkish and there are no subtitles, a decision that makes the artist's practice more obvious. Yalter is an artist who uses the methods of sociology and ethnology as well as documentary to talk about these issues.

"Toprak Ev" ("Clay House") (1974) is a work that I haven't encountered before and which got my attention quickly as it is placed in the middle of the exhibition. It is a portable tent used by nomads in Turkey. In English such tents are called "yurts" and it is a striking coincidence that the same word yurt is also in use in the Turkish language, meaning homeland. That annotates an interesting contradiction that nomadic life doesn't accept a permanent settlement, therefore, having a portable yurt makes your homeland where you are. Yalter uses excerpts from a well-known Turkish writer Yaşar Kemal on the yurt. Kemal's books mainly center on nomads and nomadic lifestyles and how these changed with the onset of Turkish modernism.

Close to midnight, I walk back to the main station to where I am going to spend the night after the opening. I see two men sitting on the stairs in front of the Cologne Cathedral and across the Cologne main station. They are singing in Turkish quite loudly about how hard it is to be away from a lover and their voices echo through the main square of the city. Yalter's show is a must-see show for those who are in Cologne and runs until June 2.