Eye of a woodcutter: An interrogation of form 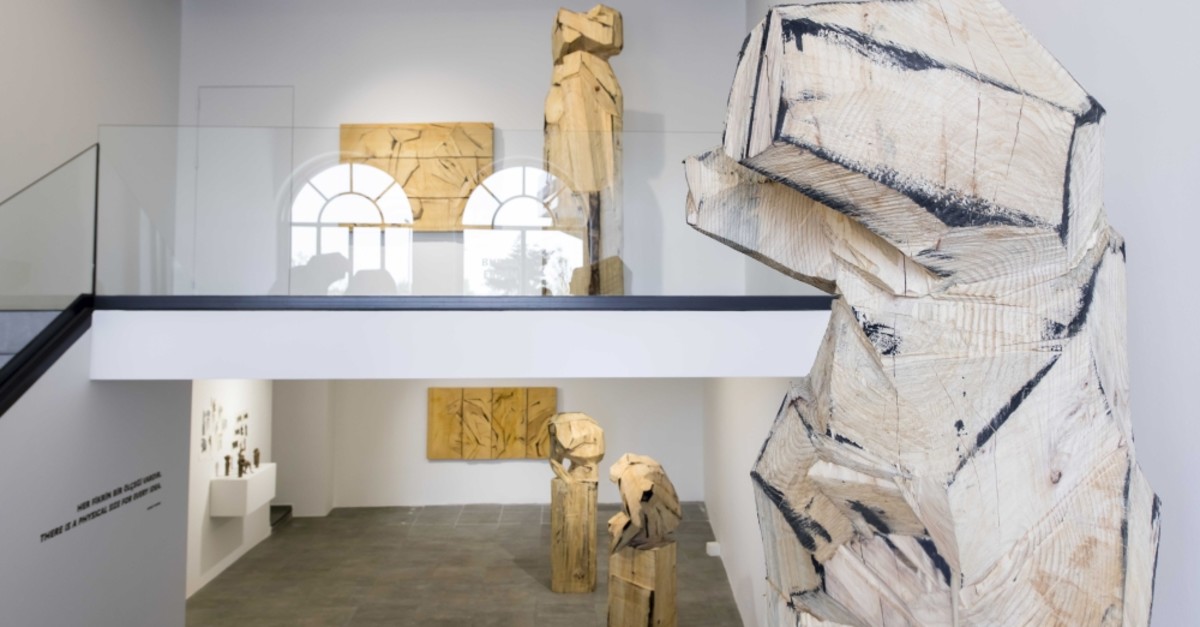 ‘Calling for the Mass,' the second solo show by sculptor Burcu Erden, is at ArtOn Istanbul until May 31. According to İbrahim Cansızoğlu, who wrote the catalog text, the show's title refers to her art as a dialogue, in the language of wood sculpture, between the imposing ubiquity of the void and the physics of mass

Burcu Erden sculpts the struggle of life out of dead trees. The stone tile floors of her compact studio cool the cavernous air. Stalagmites of anthropomorphic, wooden sculpture rise to lifelike heights. Her workspace is a practical hole-in-the-wall not far from the shores of the Golden Horn, about halfway up the inlet a short walk behind Kadir Has University.

Erden, born in 1986, shapes ideas out of forests of possibility. She uses a chainsaw to redefine fir and beech wood from Düzce into artifacts of contemporary culture. But she does not pander to the artless conceptualism of trends that slash enduring thought like prices. A single sculpture may take her two months to two weeks to complete. Unlike many contemporary sculptors who pay for assistants and ready-mades, she is alone with the mass and the void.

Inside her studio, the dust has settled in between major exhibitions, but her mind buzzes on with the insights she has gained by seeing her works through to the final cut. The fruits of her labor are as dramatic as they are sharp. She casts archetypes out of deciduous cylinders with an evergreen poise. 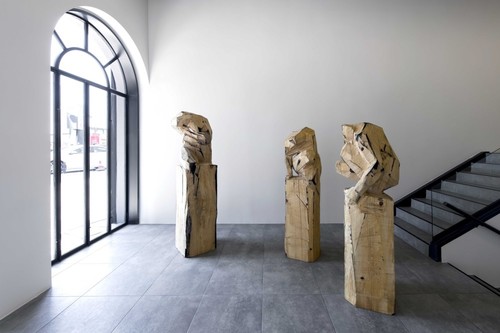 "Calling for the Mass," photographed by Kayhan Kaygusuz.

Roughly hewn, her seven sculptures are modeled after an equal number of miniature sculptures cast from bronze. A series of 14 drawings give context to her visualizations and the process by which she moves between sculpture and wooden reliefs. Preparing to execute a new piece, she draws lines onto the wood with black acrylic after her sketches. What remains is a burnt aesthetic.

She develops her investigative mind as a research assistant in the Sculpture Department at Mimar Sinan Fine Arts University. Her first solo show, "Ashes of Tomorrow," was organized in 2018 by the university for a 10-day run at Tophane-i Amire Culture and Arts Center. She thinks of her current show at ArtOn as more like her actual solo debut.

The sculptress in her element

Behind nontransparent windows, Erden cannot see the streets outside of her studio as they thin and slope up and inward from the waterfront. Many of the oldest wooden homes have collapsed from disuse. It is a district of lost causes with a history of people and places disappeared and silenced, left to the pages of storied records, piled onto the incalculable annals of abandonment and revitalization in the Turkish megalopolis.

Mahogany planks of taverns once famed on the inlet shore are increasingly overshadowed by the polished marble of mosques on the hills above. That a sculptor of raw wood has emerged in the upper crust of the contemporary art scene from the heart of one of Istanbul's most contrasting, mixed quarters exemplifies the nature of cultural diversity in the city.

Wood, once the commonest material for residential construction in Istanbul, has become a source of gentrification gold for architectural renewal projects that adapt the bygone facades of old Rum dwellings. And in the hands of Erden, it is an aptly situated medium for fine art. When asked about her choice of material, she evades direct association with traditionalism solely based on using wood.

"Even in the academy, they will find these sculptures unfinished, but actually I think it's totally finished. It's a big decision for me because I'm a young sculptor," Erden said during a studio visit a week before the opening of her show on April 26. "I usually work with clay, and the texture is close. I like fresh textures."

She is invigorated by the hum of the electrical saw. Her work is intimidating with its muscular forms, as the grit of a modern dancer bursting to upstage competition and race hearts. Her works assume the shape of faceless humanoid figures, without extremities. The pieces are brutalist evocations steeped in a nonspecific, naturalistic mythic expressionism.

Figurative contours break through abstraction from the rectangular, block of the foundation. They are not pedestals but the mass that is an essential part of the sculpture. Up from the monolithic void, unshapely creatures rise like eyeless forest gnomes empowered by a surge of resistance in confrontation with the rigidity of embodiment, rooted in a vital, unseen dynamism.

All of her pieces are untitled. They simply fall under, "Calling for the Mass." Two are reminiscent of one of the most famous sculptures in art history, "The Thinker" (1904) by Auguste Rodin. The likeness of a burly man crouches low, one knee touching his neck. What might be his hand is an amorphous fan infused into the foundation. The angular cubism of her reliefs recall the Picasso painting, "Les Demoiselles d'Avignon" (1907), and the African art that inspired him.

"They look like the human body, but actually they are also something different. It is mass. This is a sculpture, it's not a human sculpture," said Erden, welcoming at her sawdust studio while surrounded by her latest work displayed at "Calling for the Mass." "The crouching position is primitive. It is the starting point. My aim is to go far from human anatomy. The most important thing in my sculptures is abstraction. The aim is sculpture."

Where certain of her works move deeper into abstraction, further obscuring human form, they have a prismatic character, abounding in right angles. ArtOn installed one of her more abstract works on the uppermost floor of its loft gallery a few doors down from Pera Museum. The section of lumped wood retains the distinct qualities of a human being leaping upward and in mid-air, with arms crossed.

There is a mystic energy in her work, conjuring the physical saga of biological evolution from the perspective of the body. From the trees, humanity swung down to walk aright. Now that the trees are supplanted, cleaved rootless and plucked bald, the reflection of humankind is wavering unrecognizably on the surface of the imagination. Humankind is becoming abstract from the world, and vice versa as biodiversity is increasingly annihilated.

Another work at ArtOn across from the bronze models and monochrome sketches captures the effect of revolving bodily movement, its apish frame curled into itself. Without eyes to look into the soul, and lacking hands by which to empathize with the gentle, more vulnerable aspects of animal existence, her works are triumphant visions of pure life, being itself. In the same way that she handles a chainsaw with a refined technique, her sculptures express the dual harmony of toughness and fragility. Because of her success representing these motifs viscerally, her abstract figures are cracking open to let the light in, shot through with the soul of substance, like the mass of the void. And she calls for its creative contradictions with a confident, finishing touch.