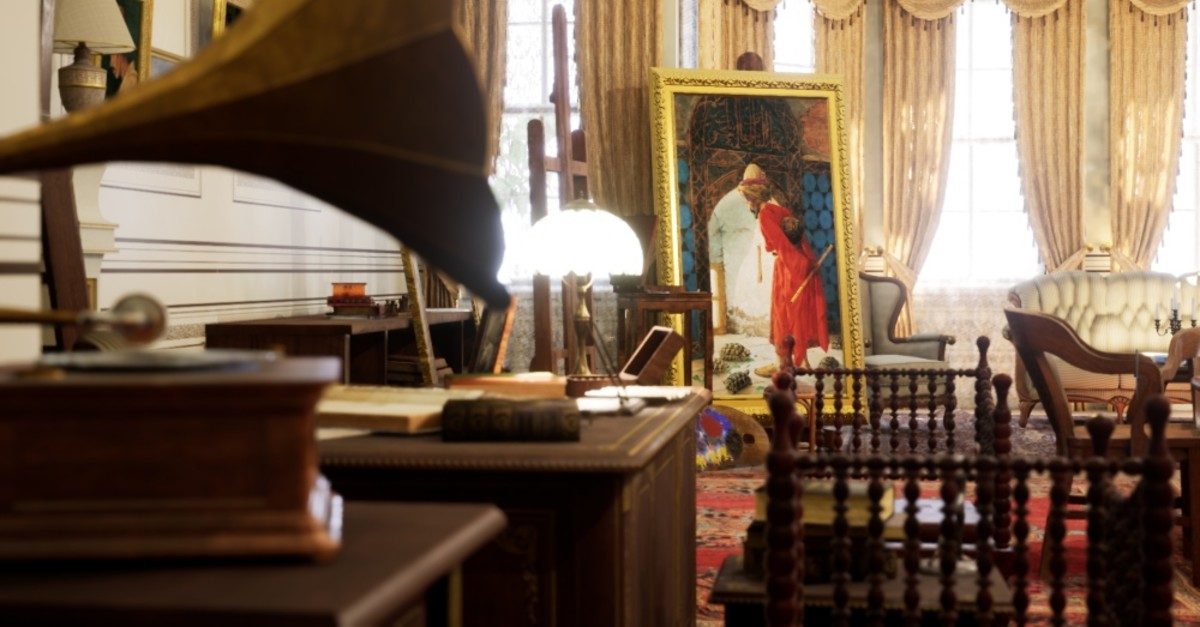 Known around the world for mesmerizing Orientalist paintings, with ‘The Tortoise Trainer' being the most famous, Osman Hamdi Bey's studio can now be experienced via VR technology at the Pera Museum

Pera Museum continues to present a variety of Osman Hamdi Bey paintings from the Suna and İnan Kıraç Foundation Orientalist Painting Collection, shedding light on the artist's passionate relationship with the art of painting. Having brought Osman Hamdi Bey's works to hundreds of thousands of art enthusiasts, Pera Museum presents its visitors an opportunity to experience his working environment and much-admired painting "Kaplumbağa Terbiyecisi" ("The Tortoise Trainer") through virtual reality (VR).

The project, which was launched on the 15th anniversary of the painting's addition to the Suna and İnan Kıraç Foundation's Orientalist Painting Collection, is named "A journey into the World of Osman Hamdi Bey: Virtual Reality Experience."

The VR application, which was enriched by information and documents collected from various archives and collections, enables the audience to pay a visit to Osman Hamdi Bey's working space, to analyze in detail the books which inspired his works, his brushes, table accessories, archaeological excavation instruments and personal items, and to step into his painting "The Tortoise Trainer," where they can look the artist in the eye.

Enriched with numerous precious works from the Suna and İnan Kıraç Foundation's "Orientalist Painting," "Anatolian Weights and Measures" and "Kütahya Tiles and Ceramics," the VR experience takes place in an imaginary space designed according to the civilian architecture of the period and research on the artist's waterside mansion in Kuruçeşme.

Özalp Birol, the general manager of the Culture and Art Enterprises of the Suna and İnan Kıraç Foundation, stated that social life has transformed with the rapid advance of technology and that this transformation brings a change in the perception of the museum, and pointed out that they have designed a new experience for art lovers and have carried the museum experience beyond the space.

Birol summarized the project: "With the experience of VR, we make the museum experience more personal and interactive and offer our visitors a richer experience. This project gives an idea about Osman Hamdi Bey, his daily life, working environment and 'Kaplumbağa Terbiyecisi,' one of the rare works of Turkish painting that we added to our collection 15 years ago."

This extraordinary experience is waiting for art lovers in the special section dedicated to Osman Hamdi Bey in the Sevgi and Erdoğan Gönül Gallery.

An Ottoman intellectual raised in the Tanzimat Era, Osman Hamdi Bey is an exceptional personality who made substantial, diversified and lifelong contributions to various fields of culture and arts, such as painting, archaeology, museology and art education. For him, the art of painting became a passion for which he wanted to spare more time. After receiving an education in Paris, he sent various works to exhibitions held in European capitals. In his works, inclinations and likes that are dominant in the Parisian art environment like Orientalism were reflected. He brought a fresh take to Turkish painting with his memorial-sized figure works. His scenes with figures draw attention with their similarity to the works by prominent Western painting artists like Jean-Leon Gerome, Rudolf Ernst and Ludwig Deutsch.

However, Osman Hamdi Bey does not observe the East from the outside but inside. His Orientalism differs from the perspective of Western painting artists. His paintings do not include elements such as violence and eroticism, which sometimes appear as a powerful element of expression in Orientalist works. The figures in Ottoman costumes are shown in an Eastern place surrounded by Eastern objects. For Orientalist canvases in which the details are meticulously handled, the artist often benefited from photographs or from the objects which were included in both his and the Müze-i Hümayun (Empire Museum) collections, along with the clothes in the Elbise-i Osmaniye (Ottoman Clothes) collection, which he was involved in, in the preparation period for the 1873 Vienna Exhibition. For the male figures in his paintings, he used his own photographs which were often posed in different clothes and sometimes people from his close circles such as his son or nephew. His works include Orientalist scenes, portraits of people from his family environment, and landscapes from Gebze and Eskihisar in particular. In these paintings of Osman Hamdi, we often see a more freestanding brush technique that commemorates impressionism, rather than the academic style in which all details are delicately handled.

More than 100 years after his death, the legacy Osman Hamdi Bey left behind lives in the works of academics, institutions and museums. He continues to make headlines, draw attention, be heard and become the topic of heated debates.

As the first and last Orientalist painter of the Ottoman Empire, Osman Hamdi Bey had the unique opportunity to observe the East from within. Rather than depicting the "other" as a number of foreign painters did, he portrayed his own culture and propounded his own cultural perceptions. His works, which often reflect Ottoman tradition and culture, manifest a meticulous and realistic approach to all the elements featured in a scene, ranging from daily life to architecture and from objects to ornamentation. Osman Hamdi is an artist who not only incorporates the use of figures but also introduces an intellectual dimension to Turkish painting. The "The Tortoise Trainer" should thus be evaluated in light of this dual aspect.

The 1906 date on the painting suggests that it should have been completed in the first months of the year in order to reach the exhibition in May. Thirty-seven years ago, before this painting, Osman Hamdi Bey thanked his father saying he read the volume of Tour de Monde magazine with pleasure in a letter to him. The volume of the magazine included an article by a Swiss diplomat named Aime Humbert. He was describing what he experienced in Japan and mentioning turtle trainers who were usually Korean. A gravure was accompanied with this narrative that explains that the trainers taught the turtles to walk in a line in accompany to the rhythm they played with a small drum and to be ranged on the top of a low table. The article and engraving in question are thought to have inspired Osman Hamdi Bey as the first idea for his work.

Osman Hamdi once again repeats the technique of using himself as a model in this painting and depicts himself as a dervish. The architectural decor suggests that the scene takes place in one of the upper-story chambers of Bursa's Yeşil Camii (Green Mosque). Dressed as a dervish and slightly bent over, a man is examining in a contemplative fashion, the tortoises roaming the floor. He wears a belted, long red robe the borders of which are embroidered; his feet are clad in çedik, or slippers for indoor wear, made of yellow sahtiyan, Moroccan goatskin leather. He holds a ney (reed flute) in one of the hands he has clasped behind his back; a nakkare, or a small kettledrum hangs down from his back. While all these details do not necessarily signify allegiance to a particular sect, they are nonetheless elements derived from the attire of a dervish. The dervish is to train these thick-shelled, laggardly tortoises not by using force, but rather by playing the ney and nakkare, namely through art.

One year later, Osman Hamdi Bey made a smaller painting that reflects the same composition, even though it contains some differences in detail. In this second version, there is an article showing that Osman Hamdi Bey dedicated it to Salih Münir Pasha, the father-in-law of his child. On Feb. 24, 1910, a few years after the artist completed this work, he passed away at the age of 58 in his mansion in Kuruçeşme.