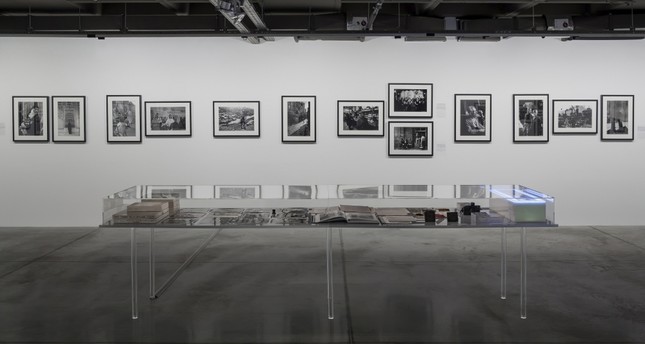 Works by Ara Güler are accompanied by various darkroom prints from the archives of the Istanbul Modern Photography Collection at the exhibition.

Istanbul Modern is tracing the changes Istanbul has gone through since the 1950s at the exhibition, which jointly held by the Ara Güler Museum and the Ara Güler Archive and Research Center, through the perspective of the famous photographer

The first personal exhibition of Ara Güler, who "wrote history with his camera," is at Istanbul Modern. The exhibition, held in cooperation between Istanbul Modern and the Ara Güler Museum via their collections and archives, lays bare the changes the city has gone through since the middle of the 20th century. It makes the role of Ara Güler's photographs visible in the formation of collective memory that has emerged as a result. The exhibition, "Two Archives, One Selection: Istanbul in the Traces of Ara Güler," can be visited from May 29 to Nov. 17.

The works of Ara Güler, which were printed in different periods and signed by the photographer himself, are accompanied by various darkroom prints, objects and ephemera released from the archives of the Istanbul Modern Photography Collection and the Ara Güler Museum, as well as the mapping of districts and angles where the photographs were taken. The exhibition aims to make visitors reflect on the relationship between the photography and the subjectivity of photographer Ara Güler, who defined himself as a photojournalist and who defined photojournalists as those "who write history with their cameras."

"Two Archives, One Selection" brings together Ara Güler's photographs, which attract viewers to look at over and over again, with archive materials, reminding the audience of both Ara Güler's production practices and his share in creating the awareness of Istanbul in our minds. 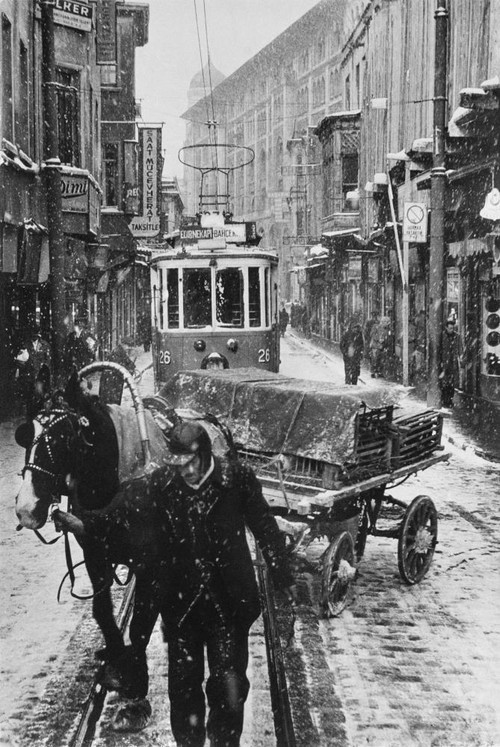 The exhibition is curated by Istanbul Modern Photography Section Director Demet Yıldız in consultation with Ara Güler Archive and Research Center Director Umut Sülün. It will remain open until Nov. 17 and will host various sessions and programs on the city and collective memory.

The opening of "Two Archives, One Selection: Istanbul in the Traces of Ara Güler" attracted great interest from the art and business world.

Speaking at the inauguration, Istanbul Modern Chairman Oya Eczacıbaşı said: "Ara Güler, the most important representative of Turkish photography in the international arena, donated 52 of his photographs to our collection in 2004 when our museum was founded and our photography section opened. This donation was very important and meaningful for our newly established Istanbul Modern photography department. We are delighted to offer these photographs of Ara Güler in our collection to our audience through a personal exhibition years later. We are exhibiting his works, especially those focusing on Istanbul, with his darkroom prints bearing his signature, his objects and belongings. We offer the changing face of the districts of the city, where Ara Güler, as a lover of Istanbul, visited and photographed, with mapping at the exhibition. Looking at these maps, we will all remember Istanbul in the past.

Ara Güler, the most important representative of Turkey's creative photography in the international arena, was born in 1928 in Istanbul.

Greatly impressed by cinema during his childhood, Ara Güler worked in every branch of filmmaking at film studios while in high school. After graduating from Getronagan High School in 1951, he began studying drama and acting with Muhsin Ertuğrul. Güler, who wanted to be a production director or playwright, published stories in some literary magazines and Armenian newspapers. After graduating from high school, he studied at Istanbul University, Faculty of Economics. However, due to his decision to become a photojournalist, he dropped out of the university and fulfilled his military service.

He started his journalism career in 1950 at the Yeni Istanbul newspaper. He worked as a photojournalist for Time Life in 1956 and for Paris Match and Stern magazines in the Near East in 1958. During the same period, he started to distribute Magnum Photos internationally. He conducted a photo interview of Noah's Ark, and these photos were distributed by Magnum Photos to over 100 publications. Again in these years, he carried out a photo interview of Mount Nemrut and the entire world recognized this mountain through his photographs. Aphrodisias, another important photo interview by Ara Güler, helped rediscover this forgotten city and be recognized worldwide. From 1956 to 1961, he worked as a photography department chief at Hayat magazine. The British Journal of Photography Year Book, published in the U.K., named him one of the top seven photographers in the world in 1961. The same year, he was accepted in the American Society of Media Photographers (ASMP) and was the only member of this organization from Turkey. In 1962, he won the title of Master of Leica in Germany. The same year, Camera magazine, the most important publication in the world of photography at the time, published a special issue about him. His works were exhibited at the "Views of the World of People" exhibition in Canada in 1967 and at the Photokina Fair in Cologne in 1968. He photographed Lord Kinross's book "Hagia Sophia" in 1971.

He had cover photographs in the English, French and German editions of the book "Picasso: Métamorphose et Unité," which was published by Skira Publishing to mark Picasso's 90th birthday. He was invited to the U.S. in 1974 and after taking photographs of many famous Americans; he displayed his exhibition titled "Creative Americans" in many cities around the world. The same year, he shot a documentary film, "The End of the Hero," featuring the dismantling of the Yavuz battle cruiser. His photographs of art and art history were used by Time Life, Horizon, Newsweek and Skira. As of 1989, he joined the project "Day and the Life of..." and worked with some of the world's most famous photographers in Indonesia, Malaysia and Brunei. The photographs of Sinan the Architect's works he long worked on were published by Editions Arthaud in France and by the Thames & Hudson publishing house in the U.S. and the U.K.: "Sinan, Architect of Süleyman the Magnificent in 1992." The same year, his book "Living in Turkey" was published by Thames & Hudson in the U.K. and the U.S., and by Archipelago Press under the name "Turkish Style" in Singapore and by the Albin Michel publishing house under the name "Demeures Ottomanes de Turquie" in France.

Ara Güler was granted the title Légion D'Honneur; Officier des Arts et des Lettres by the French government in 2002 and La Médaille de la Ville de Paris by the Paris municipality in 2009. He was awarded the Turkish Presidential Culture and Arts Grand Award in 2005, the Turkish Culture and Tourism Ministry Culture and Arts Service Award in 2008, the Turkish Grand National Assembly Distinguished Service Award in 2009, the U.S. Lucia Awards Lifetime Honor Award in 2009 and the Turkish Culture and Tourism Ministry Culture Arts Grand Award in 2011. He was given an honorary Ph.D. by Yıldız Technical University in 2004, Mimar Sinan Fine Arts University in 2013 and Boğaziçi University in 2014. Ara Güler opened hundreds of exhibitions around the world, published dozens of books and photographed many celebrities and conducted photo interviews with them, including Bertrand Russell, Winston Churchill, Arnold Toynbee, Pablo Picasso and Salvador Dali. The Ara Güler Museum and the Ara Güler Archive and Research Center, actualized in the framework of the cooperation between Doğuş Group and Ara Güler, opened Aug. 16, 2018, on Ara Güler's 90th birthday. The master photographer passed away on Oct. 17, 2018.