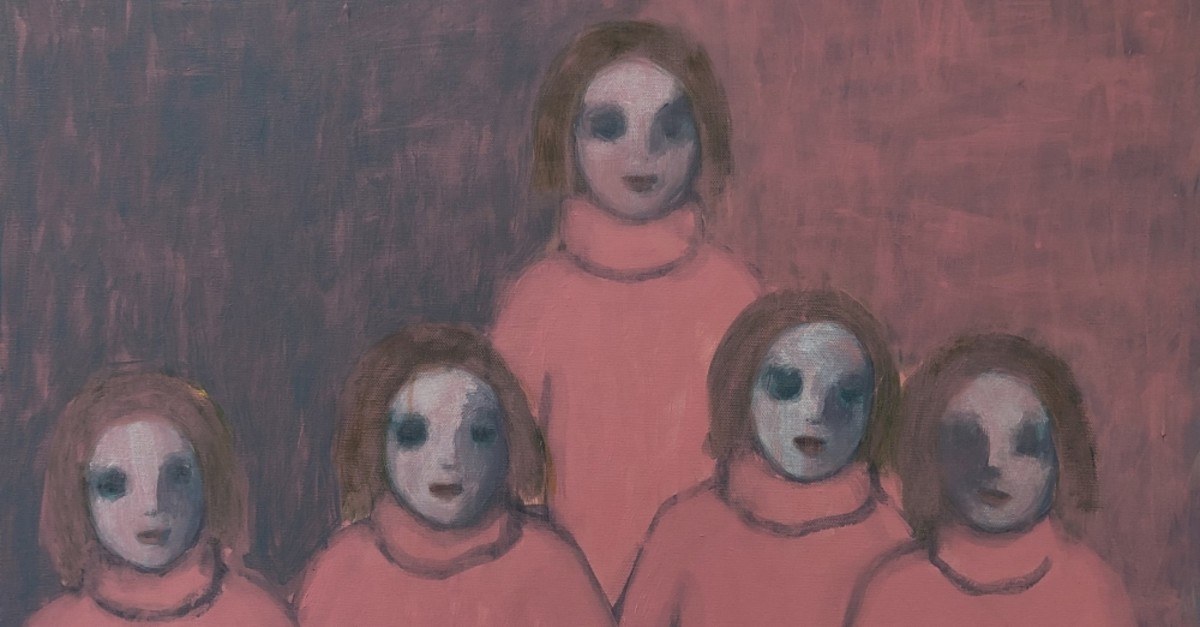 Ayu015fe Wilson extracts the inner child within her using soft fibers dipped in paint, and like a ripening root vegetable, lifts her suppressed feelings from the turned soil of the mind.
by Matt Hanson Jun 15, 2019 12:19 am

For her fifth solo show at Pg Art Gallery, Turkish-American artist Ayşe Wilson returns to Istanbul for ‘Quiet Afternoon,' a rediscovery of the innocence and wonder of childhood through vibrant, figurative paintings. Her visual signature shines forth with rainbow light, as magical as a birthday wish

The painter was at home, quick to reveal her origins from Massachusetts with all of the sarcasm of a true New Englander. It was Friday morning in New York City, where Ayşe Wilson has lived for the better part of her life as an artist. She was reflecting on her exhibition career in Istanbul, where she has been represented by Pg Art Gallery since 2007.

Wilson had finished her graduate studies and was working for Jeff Koons, an opportunity that she described as satisfactorily fleeting. As a Turkish-American woman, Wilson traveled to Istanbul a lot growing up in Boston. Pırıl Güleşçi Arıkonmaz was a friend of a neighbor of one of her cousins in Turkey. Her gallery, Pg, was looking for new artists. It was a match.

Not only was it her "first real gallery," as Wilson remembered, but Arıkonmaz was the "first real person" she worked with in a world defined by commercial exploitation and the pretense of fame. For over a decade, the feelings have been mutual, with Wilson growing up as an artist, and Arıkonmaz as a gallerist.

The New York Academy of Art attracted Wilson for its focus on the human figure. Its halls were steeped in the theory that if an artist can paint the human form, they can paint anything. Wilson roundly agrees, even if she understands artists who don't always want to paint it. For her, it sparked an enduring, and singular interest in classical training.

"Painting is something that really takes a long time to learn how to do. You have to spend a lot of time with yourself, to figure out how you want to do things. I've always found it very interesting to see how it's done. In the end you learn how to do things by yourself," she said.

Five years passed between "Swimmers" and her second solo show at Pg in 2012, titled "when we were little" (2012). She returned to Istanbul for her opening in Tophane, and had started her own family, with two sons. "when we were little" touched on her life as a new mother, with special nostalgia for her childhood memories in Istanbul.

Wilson's father died when she was very young. He had cancer for years. She remembers feeling death all around her, growing up with the weight of sickness in the house. And what made it worse was that her parents didn't speak openly about it. They were scared to bring it up to their children, to express sadness. Tragedy hung in the air. 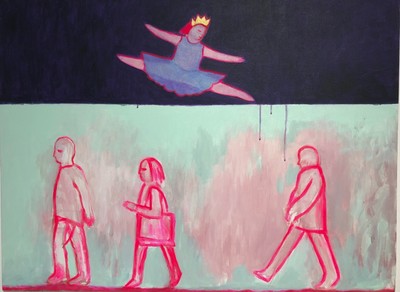 Also struggling to cope with her mother's mental illness, her early traumas developed into adult inspiration. She took her pain by the horns, a toreador with a brush, dancing before the bittersweet intensity of her primal gaze. In her delicate hands, she opens her eyes anew, as a girl seeing the world for the first time. Happiness comes with undertones of sadness.

With her sons approaching their teens, she consistently revisits the themes that are central to childhood on the cusp of adolescence. At some point, a child realizes that they can't go everywhere alone, that some places are dangerous. Human nature disillusions. Friends can be mean. These hard truths come with maturation in an imperfect, human world.

Her art is a reflection of her own mental and emotional state. She draws visual metaphors observing her children. She extracts the inner child within her using soft fibers dipped in paint, and like a ripening root vegetable, lifts her suppressed feelings from the turned soil of the mind. In her practice, painting implies the optimism of connection.

The retrospect is suspect

In comparison to "Swimmers," her second solo show at Pg, "when we were little" captured more individualism in the childlike human figures that Wilson paints in plush colors, exuding prepubescent comforts. A character emerges from the fog of memory, and angelic, personifying the cherubim of youth.

"I feel like it was a physical space that we all had. Wherever it was, you had it. You had your first bedroom, your first garden you played in. It's a physical place, even if it changes and for everyone it's different. We can all share that," said Wilson. "Sometimes seeing art can really cheer you up."

"Little Friends," her third solo show at Pg in 2015, is based on her readapting the "imprimatura" layer in classic painting. She studied the traditional discipline, pursuing an education in Florence after graduating from Wellesley College in 1991. Her work was compared to the Italian Renaissance master Fra Angelico, but she realized canonization wasn't for her.

While in Italy, drinking in the palatable tones of masterpieces, the psychological richness of its visual literacy, she reached a creative impasse and had an epiphany. She thinks of it like becoming a natural to her art. Some play instruments, others simply are not musical. Her clarity led to a new direction all her own.

In the shadow of Leonardo, Vermeer, Cezanne, Pollock, she was as curious as a child. She wanted to know how they did it, and so, started at the beginning, by learning the technical skills required of the "imprimatur" layer, in which blank, background surfaces are coated for a neutral ground that can then be lightened or darkened. She immersed her art in raw, fresh starts, departing from classicism where it begins on the canvas. Her recurrent, ethereal fleshy blues have been subject to criticism. When painting in the classical style, a blue-green undertone is applied to contrast flesh colors, adding volume, especially when painting light, pink flesh.

Her paintings retain the innocence of a color-blind child untainted by politically correct identity politics. Many people don't have a specific flesh color. Her focus on undertones is an inaudible statement on the nature of color as central to human identity.

She consistently paints female children, but does not identify as feminist. Her paintings are

personal, born of inspirations smudged on backseat windows during family road trips. Wilson is a woman, a mother, an artist, and an optimist. She does not admit to direct autobiographical references in her illustrative work. But she is there, ephemeral as youth. Her solo shows at Pg chart an interlinked path of maturation, from the womb of "Swimmers," to the infancy of "when we were little," the childhood "Little Friends," and adolescence in 2017, for "Polaris." Her current series, "Quiet Afternoon" has the quality of a belief suspended, a breath held, before remembering.

In 13 paintings, "Quiet Afternoon" transfixes with a subtle majesty. Her feminine portraiture is deceiving simple, animating life's springtime with fantastical, melancholic palettes. Rainbows, flowers and crowned young women contrast with the rich, yet understated classicism of her imprimatura layers. Like the liberated womanhood of Semiha Berksoy in Turkey, or the cartoonish promise of Keith Haring in America, her art expresses new life coming into its own.