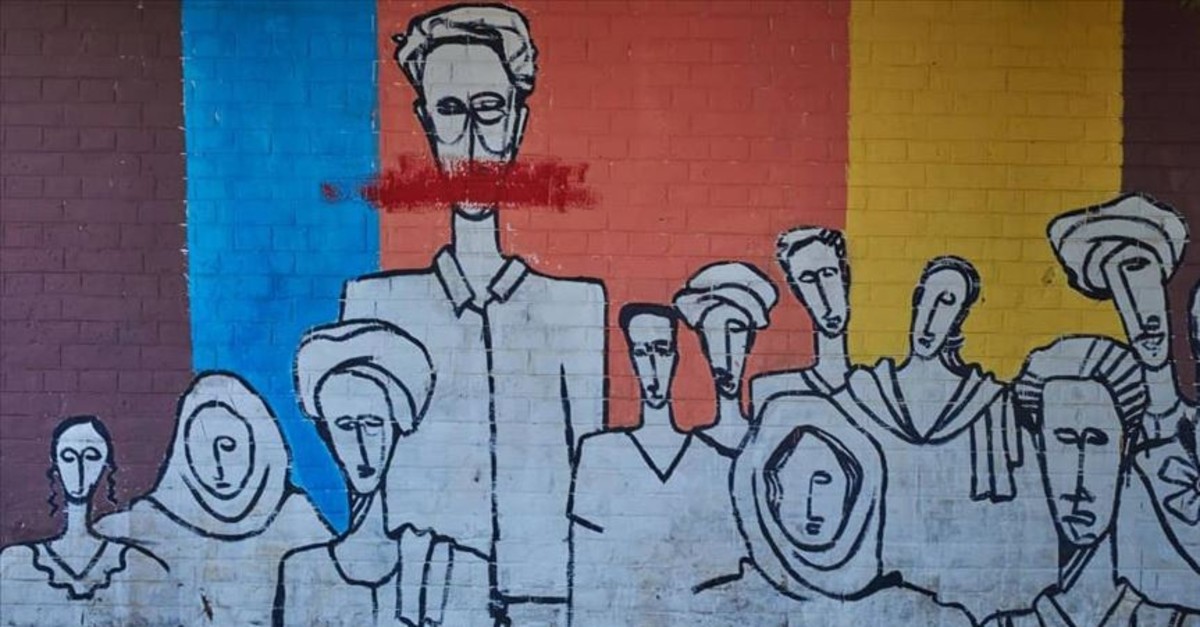 A wall painted by graffiti artists in Sudan describes the mood of the people.
by Anadolu Agency Jul 19, 2019 12:07 am

Inspired by popular protests that swept autocrat Omar al-Bashir from power, graffiti artists have been using the walls in the capital Khartoum to express their aspirations for a better future in Sudan. Everywhere, murals and portraits are painted across the walls documenting protests that began in December against al-Bashir's regime and eventually led to his ouster by the military in April. Drawings reflecting the revolution's slogans for "freedom, justice and peace" are also painted on the walls as part of campaigns to mobilize protesters demanding the handover of power to a civilian administration.

"We consider ourselves one of the genuine initiators of the revolution," Muhanad Khalafallah, a graffiti artist, told Anadolu Agency (AA). He said artists have painted the majority of walls in many areas in Khartoum to express their dreams and aspirations. "The arts always flourish during revolutions," he said, adding that their paintings help inspire and mobilize the public to rally until their aspirations are fulfilled. "Freedom of expression is a matter that can be guaranteed in a government representing the revolution," he said.

Khalafallah said artists have painted all the walls around the sit-in near the army headquarters. "We worked for days and nights to finish our work during the sit-in, but the security forcess have demolished our work after the dispersal of the sit-in," he said.

"We were planning to convert the area into a big exhibition that shows the greatness of our revolution but the enemies of the revolution have intentionally demolished them after the sit-in's dispersal," he lamented.

Prominent Sudanese musician Mohamed Marzoog said musicians have also played a major role in rallying support for the Sudanese revolution. "Music and songs are the voice of the revolution," Marzoog told AA: "We don't represent ourselves," he said. "We show the pulse of the people and the revolution."

According to Marzoog, musicians, artists and singers had been oppressed under al-Bashir's regime. "This is why the revolution has seen a heavy participation from artists," he said.

The Sudanese diaspora have also joined the effort to tell the story of the Sudanese revolution on the walls. Speaking with AA, Berlin-based graphic designer Ahmed Islam Aldin said the Sudanese living abroad have engaged in a solidarity campaign to support artists back home. "Designers and artists have filled the virtual sphere with a lot of artworks," he said. "Some were used as posters during demonstrations, while others were used to raise awareness among protesters."

Islam Aldin said several online platforms were launched in an effort to rally support for the Sudanese revolution. "Our platform was used to launch #askmeaboutsudan and #blueforSudan after the story of Mohamed Mattar and his favorite color – blue" he said.

Mattar, a 26-year-old British Sudanese engineer, was killed during the violent breakup of the protest sit-in in Khartoum. Mattar's social media profile photo had been a solid shade of deep turquoise blue when he died. His death has prompted thousands of sympathizers around the world to change the color of their Instagram to rally support for protests in Sudan.

Islam Aldin said the use of posters and artistic slogans during protests in Sudan has led to a new boom in arts and political arts in general in Sudan. In January, a group of diaspora artists and curators came with the idea of organizing exhibitions in different capitals to raise awareness about the Sudanese revolution. The exhibitions were held in Berlin, Venice, Vienna, Sydney, Paris and other cities.