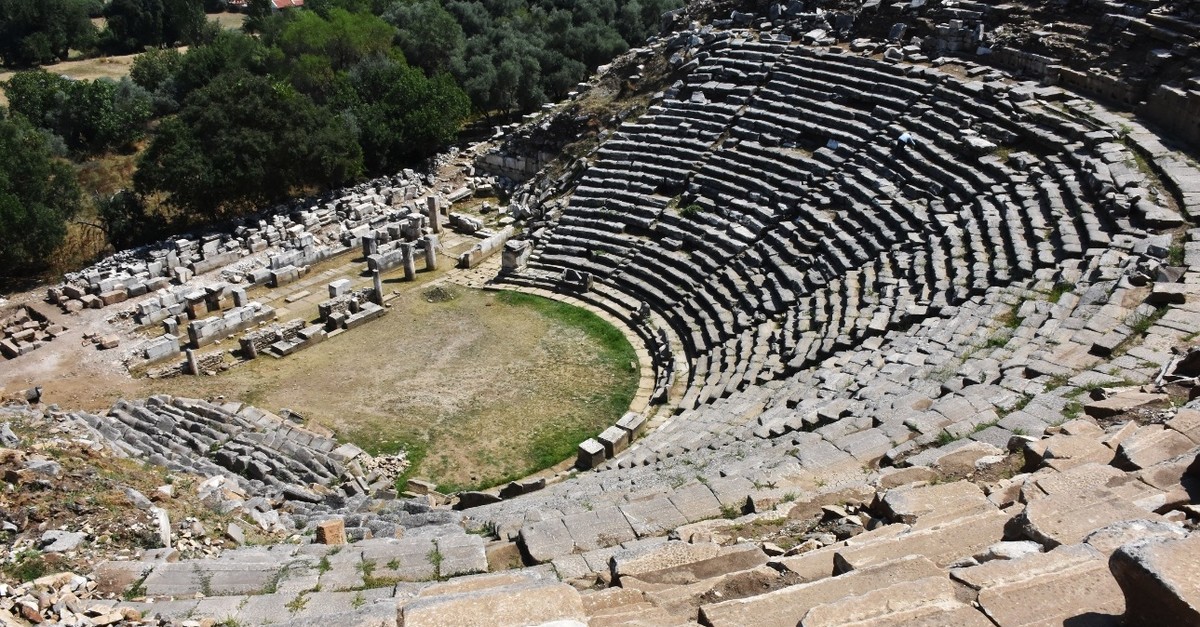 A photo overlooking the ruins of the Stratonikeia ancient city.
by Anadolu Agency Aug 07, 2019 12:28 am

The stage columns and underground structures of the 2,200-year-old theater at the ancient city of Stratonikeia in the Yatağan district of Muğla are being unearthed. The excavation team lead by professor Bilal Söğüt from Pamukkale University continues at Stratonikeia, which is listed on the UNESCO Temporary Cultural Heritage List.

At this site work from the Hellenistic, Roman, Byzantine, Beylik and Republican periods are found together and many date back 3,000 years which are coming to light with excavations.

Efforts are ongoing to ensure that the 2,200-year-old ancient theater regains its former magnificence.

Deemed as one of the largest marble cities in the world, Stratonikeia is on the map of domestic and foreign visitors with its 3,000-year-old historical ruins.

Speaking to Anadolu Agency (AA), Söğüt said that along with the excavation, there is also ongoing restoration work.

Söğüt emphasized that Stratonikeia, one of the most important cities in the region of Caria, is a settlement belonging to the local people of Caria and the Lelegians of Anatolia and that the ancient theater in the city was one of the most glamorous structures with its three-story stage building built 2,000 years ago.

Conservation work had been carried out at the theater by the Muğla Culture and Tourism Directorate with the support of the Southern Aegean Development Agency a few years ago. Now, the excavation team and students are excavating the stage building at the entry of the ancient theater.

Söğüt noted that they will check the soundness of the blocks at the theater during their work, place the existing blocks onto their original spots while the missing parts will be completed.

"The theater, with its stage, was very spectacular during the reign of Augustus." We will ensure that these structures return to their old glamorous days with our excavations," Söğüt said and added: "We previously opened the eastern parodos [a side entrance] of the stage building and lifted the pillars. Now, we are revealing the western parados section and the other structures of the stage. Once the excavations are complete, we will bring together the unearthed blocks and we will display these findings to visitors after the restoration."