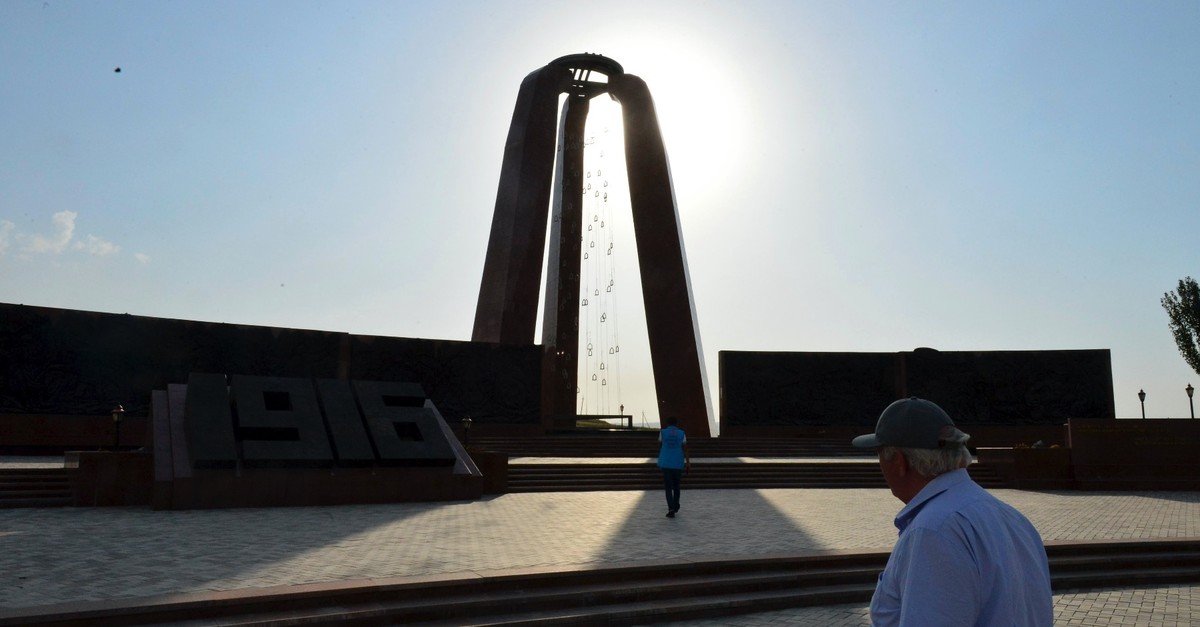 The Chingiz Aitmatov monument in Kyrgyzstan gathers thousands of visitors from various countries.
by Anadolu Agency Aug 24, 2019 12:02 am

The Chingiz Aitmatov Monument in Kyrgyzstan stands out as a place that brings together thousands of people from the Turkic world. The monument, in the foothills of the Tian Shan, meaning the Mountains of Heaven, welcomes visitors around the clock.

It is like an umbrella under which the entire Turkic world, including Turkey, Kazakhstan, Azerbaijan, Uzbekistan and East Turkestan, come together.

At the entrance and exit to the monument, Kyrgyz soldiers stand guard 24 hours a day, and visitors read the Quran.

Guests who have their photos taken here also get information from the authorities at the Ata-Beyit Memorial Complex, which includes world-famous writer Aitmatov's father's grave, and a museum.

Şemsettin Ünal, the religious services counselor of the Turkish Embassy in Bishkek, told Anadolu Agency (AA) he has been working in Kyrgyzstan for 15 years. Ünal said Aitmatov was an important writer who has seriously contributed to world literature.

Noting that Aitmatov's memory is honored in parks and streets in many countries, Ünal explained that the grave of the renowned writer hosts serious masses of visitors in every period.

He stated that everyone who came to the country visits the monument and said, "We have visited the grave of Aitmatov with our religious affairs team, who conduct sacrificial activities. This place is known as Atabeyt in Kyrgyz. Nearly everyone from statesman to committees and citizens often visit this place. It is an important center featuring spiritual memories for this country."

Ahmet Kurt, who came from Turkey to visit the place, emphasized that the name of Aitmatov is imprinted on his memory.

Remarking that the most important place that he wants to see in Kyrgyzstan is Aitmatov Monument, Kurt continued: "Aimatov is an honorable and great value that the Turkic world presented to the whole world. It is not possible to describe the spiritual pleasure of meeting our wider [Turkic] family at this monument. I recommend everyone who comes to Central Asia, which is our homeland, to visit this place."

Selahattin Kaşgarlı from East Turkestan said he felt different when he saw the monument. Mentioning that there is a spiritual atmosphere in the place, Kaşgarlı added: "I had a different feeling here. Chingiz Aitmatov reveals the torment that his people and our wider family suffered with his works. This place is so different. Like Aitmatov said, a human cannot tell everything, words are not enough to tell everything. Rest in peace!"

Chinghiz Aitmatov was born on Dec. 12, 1928 in Talas which is located in modern day Kyrgyzstan. He began work at a very young age because of World War II and continued his education on veterinary medicine and agriculture. He later enrolled to the Maxim Gorky Literature Institute in Moscow. His books have been translated in many languages around the world. Aitmatov represented the Soviet Union and the Russian Federation as an ambassador between 1990 and 1994 and later the Republic of Kyrgyzstan until 2008.