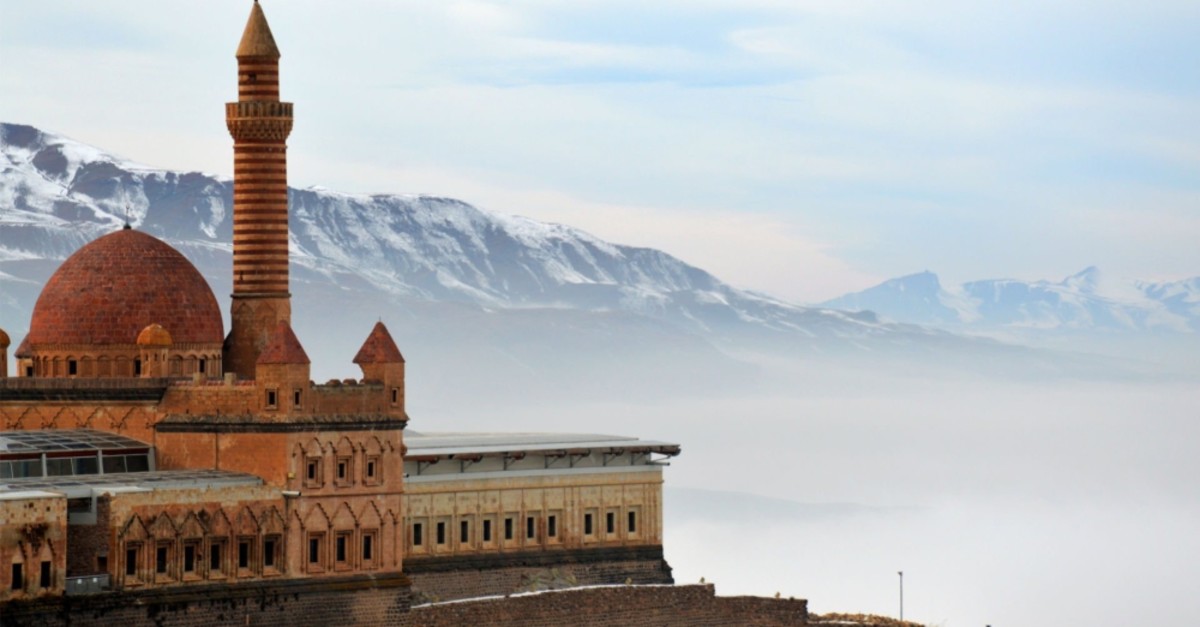 Located on a hill with an altitude of 900 meters, 7 kilometers to the southeast of the district, the palace stands out with its central heating and toilet system.
by Anadolu Agency Aug 29, 2019 12:06 am

Built in the Ottoman period in Ağrı province's Doğubeyazıt district, the İshak Paşa Palace, the largest in Turkey after Topkapı Palace, has been standing for 235 years and attracts the attention of local and foreign tourists

A fine example of Ottoman architecture in Anatolia, the palace also bears the traces of decorative arts of the Great Seljuk Empire and 19 years ago it was included in UNESCO's World Temporary Heritage List. The palace draws visitors from all over the world, mainly from Europe and Asia.

The 116-room palace, located on a hill with an altitude of 900 meters, 7 kilometers to the southeast of the district, resembles an eagle's nest and stands out with its central heating and toilet system. The palace and its surroundings bear also valuable works dating back to 3,000 years ago, offering visitors many options.

Speaking to Anadolu Agency (AA), professor Yusuf Çetin, a faculty member of Ağrı İbrahim Çeçen University (AİÇÜ) and dean of Iğdır University's Faculty of Fine Arts, said that the palace is the largest and most important structure of Ottoman architecture in Anatolia.

Only palace in Anatolia

Çetin highlighted that İshak Paşa Palace is also important since it is the only palace in Anatolia and that it has eclectic features as it contains traces of not just the Ottoman architecture but also Seljuk architecture and Caucasian arts. 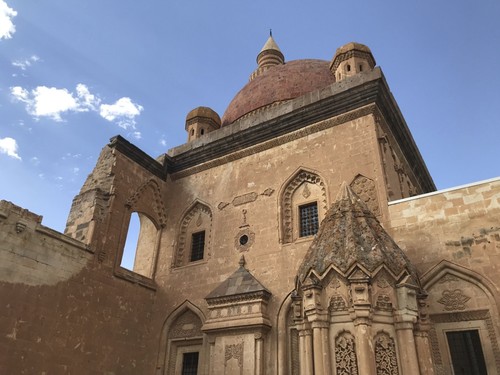 A fine example of Ottoman architecture in Anatolia, the Ishak Paşa Palace also bears the traces of decorative arts of the Great Seljuk Empire.

Çetin stated that they have very important data on the construction process of the palace and continued, "The inscription on the crown gate of the harem section reads that it was built in 1784 by İshak Pasha II from Çıldıroğulları beylic. The palace consists of a complex structure, and three nested 'U' shaped courtyards. The palace is composed of intertwined courtyards and service units placed around these courtyards, which we see mostly in traditional Turkish art architecture. In general, the ornamental features

of the palace resemble the Great Seljuk State but also, Seljuk architecture is manifested in many forms. There are also baroque rococo empirical influences from Europe, which was popular at the time.

Referring to the features of İshak Paşa Palace and the importance of unused sections, even in Europe, Çetin noted that clay water pipes, which enabled circulation of hot water inside the walls through pipes, resembling the central heating systems of today were found at the palace. Another interesting feature of the palace is the toilet section, designed on very large spaces, which was not common at the time in European palaces. "There were no toilets in European palaces at that time. This becomes a controversial subject in terms of civilizations yet, having turned such a large comfortable area into toilets at the İshak Paşa Palace when the concept of toilet in Europe was not introduced to palaces deserves admiration. This palace was one of the most beautiful signs that the Seljuk art traditions prevailed in the eastern Anatolia region after the Seljuk State disappeared and the Ottoman State was established, and this effect has been demonstrated until recently," Çetin added.

Çetin also stated that the palace is located in a position where the works left by 3,000 years of civilizations are located and this proves once again the importance of the palace.

"İshak Paşa is a structure that almost everyone coming to the region wants to see in the first place. İshak Paşa Palace perhaps stands out in terms of structure, but there are more valuable works around the palace," Çetin noted.

Some of these valuable works needs to be opened to tourism according to Çetin. Right next to İshak Paşa Palace lies Beyazıt Fortress, which dates back to the Urartian period and was repaired in the Middle Ages. This fortress holds a rock tomb belonging to the Urartian period, the only example of its kind in the eastern Anatolian region. Çetin also noted that these structures should be included in tourist guides and programs.