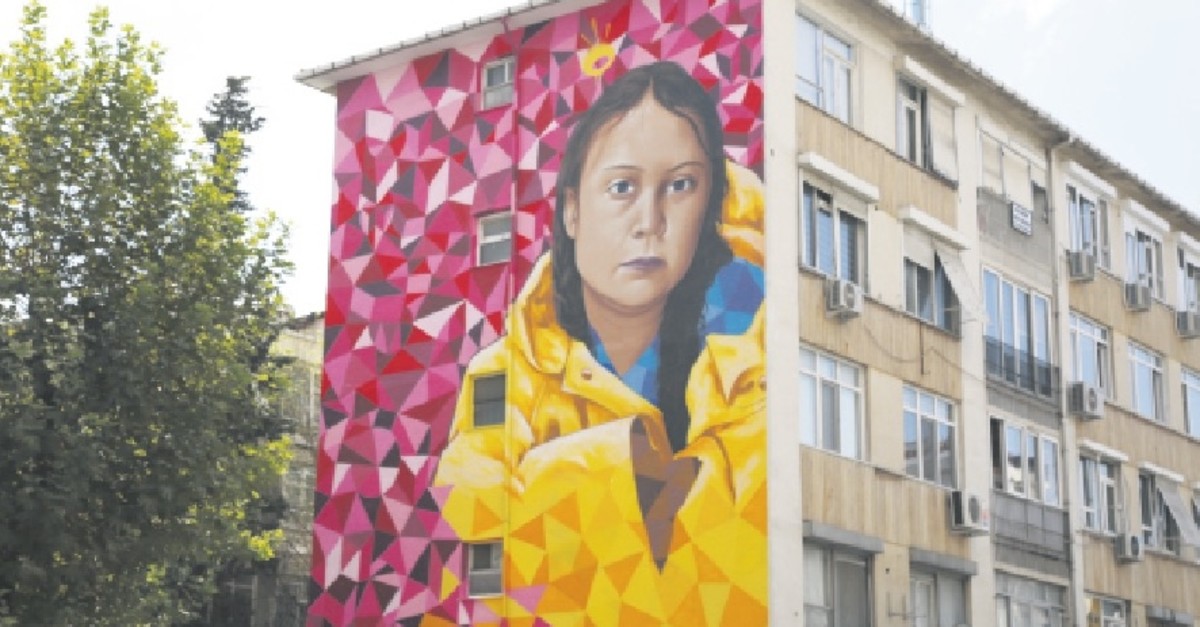 The mural of Greta Thunberg was painted by Portuguese mural artists Mr. Dheo and Pariz One.
by Daily Sabah Sep 09, 2019 1:07 am

The portrait of 16-year-old Swedish climate activist Greta Thunberg, who created awareness among her peers by launching a school boycott movement to draw attention to the climate crisis and was nominated for the Nobel Peace Prize, was painted on the wall of an apartment building in Kadıköy as part of the mural festival.

The portrait of Swedish Greta Thunberg, who initiated the Fridays for the Future movement against climate change and is supported by students in many countries, was painted by Portuguese mural artists Mr. Dheo and Pariz One on the wall of a building on Mustafa Mazharbey street in the Göztepe area of Istanbul's Kadıköy district. Greta Thunberg, who stood out by staging a demonstration where she refused to go to school one day to draw attention to climate change, was also supported by her peers from different countries across the world, including Turkey, with similar school boycotts.

Greta Thunberg also refused to fly to the United Nations Climate Summit in the U.S. to draw attention to carbon emissions, crossing the Atlantic Ocean in an environmentally friendly sailboat in two weeks and reaching New York successfully. With the paintings by Portuguese mural artists Mr. Dheo and Pariz One, the message of Thunberg to combat climate change was carried to the streets of Kadıköy. The photo of the building was shared with the message "Greetings from the streets of Kadıköy to Greta Thunberg and all climate activists" from the Turkish social media account of the Fridays for the Future movement.

One of the works created within the scope of the mural festival organized by Kadıköy Municipality and attended by six foreign and one local artist was the painting of the doyenne artist Gülriz Sururi. Zag & Anje from France painted master actress Gülriz Sururi on the stairs of Moda Street. Gülriz Sururi, who passed away last year, played the leading role in the musical "Sidewalk Sparrow" which presented the life of French icon Edith Piaf.

The festival, which is colored with the works of various artists in the neighborhoods of Caferağa, Rasimpaşa, Göztepe and Koşuyolu, will continue until Sept. 14. Within the scope of the festival, WD (Wild Drawing) from Indonesia painted a girl smelling sunflowers on a wall in Kırkahvesi Street in Rasimpaşa; Axel Mengü from Turkey portrayed a message to combat elephant hunting and painted a mural of an "elephant abducted by aliens" on Koşuyolu Street; Zag & Anje from France painted the portrait of master actress Gülriz Saruri on the stairs of Moda, and Mr. Dheo & Pariz One painted the portrait of climate ambassador Greta Thunderberg. Meanwhile, Carlos Callizo from Spain continues mural painting in Hasırcıbaşı Street, Sasha Korban from Ukraine in Caferağa Cem Street, and Vertigo Graffiti from Colombia is leaving a mark at the Halis Kurtça Culture Center.