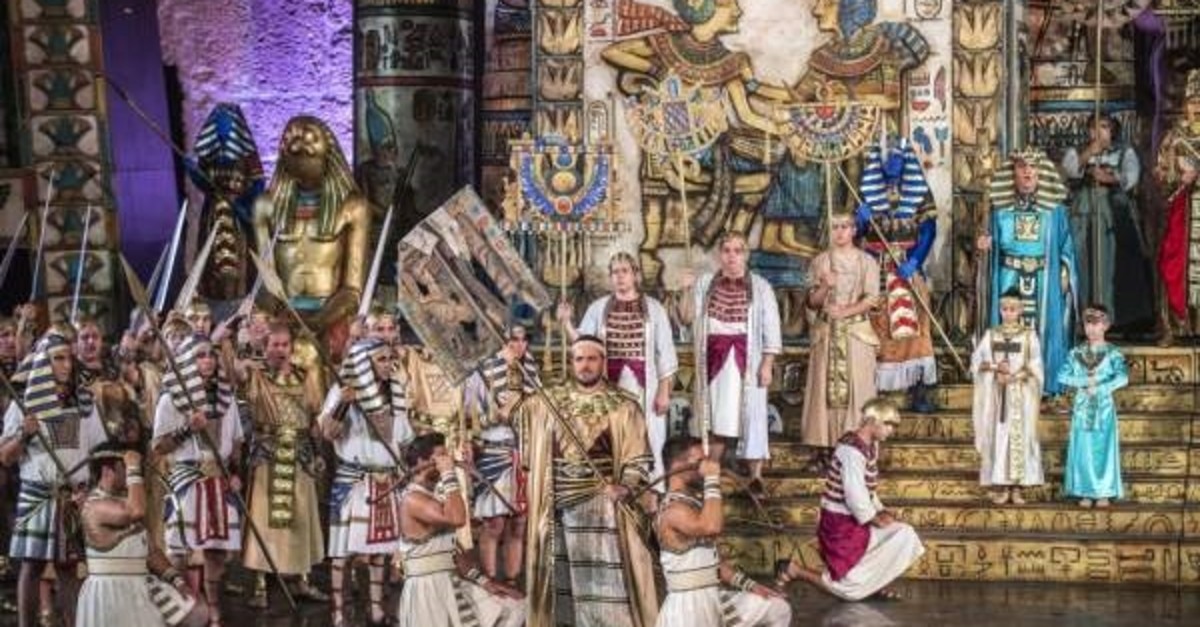 A scene from the opera ,Aida.,
by Anadolu Agency Oct 15, 2019 11:36 pm
The opera "Aida," one of the major productions of the State Opera and Ballet, will be presented to art lovers in all of its magnificence at the Congresium Stage for the first time in the capital Ankara on Oct. 19. The opera "Aida," which is about the impossible love of the brave commander Radames and the captive Abyssinian Princess Aida, was staged at the Ancient Theatre of Aspendos last month. “Aida,” which has gone down in history as the "most beautiful opera" by Giuseppe Verdi, the famous Italian composer from the 19th Century School of Italian Opera, will captivate audiences with its magnificent decor and costumes at the Congresium Stage in Ankara for the first time.
Directed by famous Italian director Vincenzo Grisostomi Travaglini, “Aida” received great acclaim from the audience at the Ancient Theatre of Aspendos. This time, it will be performed by the cast of the Ankara State Opera and Ballet with magnificent decor and costumes.
In turn, Feryal Türkoğlu, Nurdan Küçükekmekçi and Burçin Savıgne will take on the role of “Aida,” Murat Karahan, Efe Kışlalı and Koray Damcıoğlu will play "Radames," Ferda Yetişer, Ezgi Karakaya and Zeliha Kökçek will play "Amneris,” and Eralp Kıyıcı and Gürgan Gürgen will take on the role of "Amonasro.” Again, alternately, the artists of the Ankara State Opera and Ballet Orchestra, under the direction of conductor Antonio Pirolli and conductor Can Okan, will accompany the performers.
At the Congresium on the evening of Oct. 19, art lovers will have the opportunity to watch the "Radames" performance of “Aida” staged by State Opera and Ballet's general manager and general art director, tenor Murat Karahan, at Italy’s historical Arena Di Verona and Antalya’s Ancient Theatre of Aspendos in the summer. Feryal Türkoğlu will play “Aida” in the show.
The decor for the work was designed by Özgür Usta, the costumes by Savaş Camgöz and Gürcan Kubilay, and the lighting by Giavanni Pirandello; the choir will be led by Giampaolo Vessella. Sergei Terechenko choreographed the production, which also features ballet and children's ballet performers from Ankara State Opera and Ballet.
Last Update: Dec 20, 2019 1:04 am
RELATED TOPICS