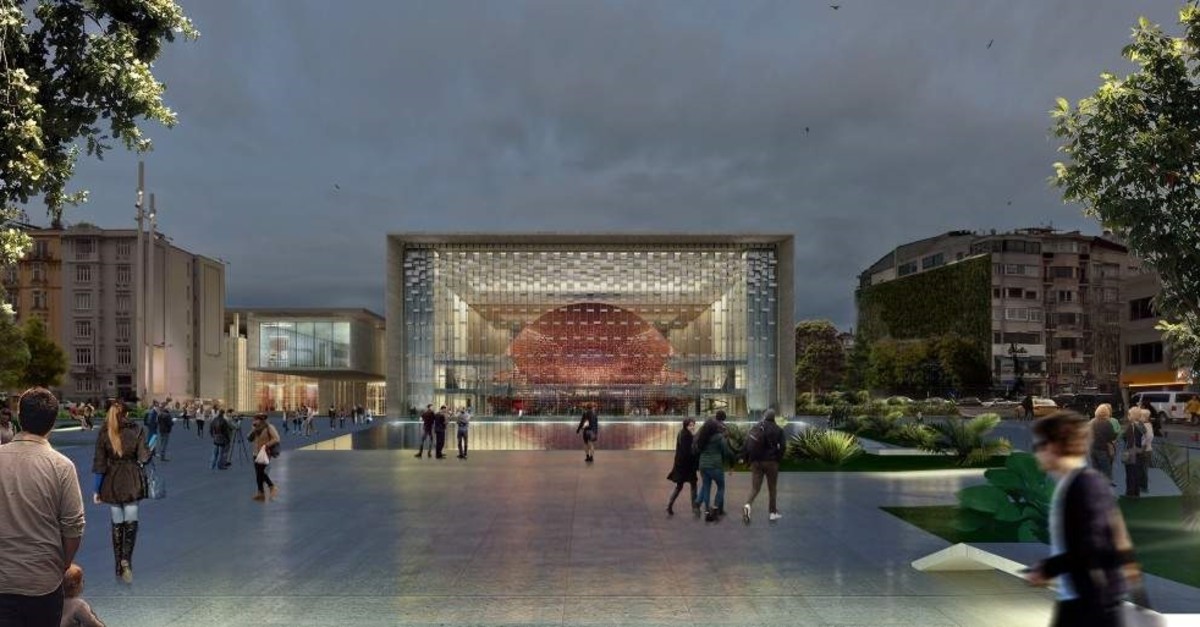 The foundations of the new AKM were laid last year.
by Daily Sabah Nov 04, 2019 7:56 pm
A national opera featuring famed Ottoman architect, Mimar Sinan, will go on stage at the inauguration ceremony of the newly rebuilt Atatürk Cultural Center (AKM). The building will represent an iconic landmark for Istanbul and was reconstructed upon the orders of President Recep Tayyip Erdoğan.
Speaking at a ceremony to announce the reconstruction at Taksim Square on Feb. 10 last year, President Recep Tayyip Erdoğan said: “Hopefully, when this work is completed in two years, it will become one of the sources of pride for not just our city of Istanbul, but for the whole of Turkey, and the world will commemorate this work.”
While construction work on the AKM continues, Erdoğan announced on Oct. 29 that an opera centring upon Mimar Sinan will be staged at the opening ceremony of the AKM as a gift to the Republic and that it will be composed by Hasan Uçarsu, a lecturer at Mimar Sinan University.
Speaking on the project, Fecir Alptekin, Chief Advisor to President Recep Tayyip Erdoğan, stated that opera houses around the world traditionally open with new and specially-prepared shows that put history at the center.
“From the very beginning, we were determined to give the building a world-class opening, with a special, national work. For this, we decided to have a show that was both from our national motifs, but which also has a universal meaning. The AKM is the heart of Istanbul. Mimar Sinan is a great artist who drew the portrait of Istanbul. So, there are lots intersectional points. The question of who could create this work was also an important one. After a detailed study of living musical composers, Hasan Uçarsu came out in front. Uçarsu is a very, very important composer. The Presidential Symphony Orchestra's 2018-2019 season opened with Hasan Uçarsu's "'Troya'dan Çanakkale'ye" ("From Troy to Çanakkale"). We have already had our first meeting with him. He was very excited when he heard about the project and we have begun working together,” she added.
Hasan Uçarsu,a student of Adnan Saygun, composer of the first Turkish Opera, said that he was honored by the proposal, adding: “The AKM is an iconic cultural and artistic center for Istanbul. This venue, which carries the silhouette and heart of the city, will come to life again. Mimar Sinan is an artist who gave his soul to Istanbul and left a mark on the city. It was the perfect decision to have a stage production of Mimar Sinan. But it is also a heavy responsibility for me.”
Indicating that the works have only just begun and that they are on the verge of writing the libretto, Uçarsu added: “Bertan Rona will write the libretto. He is currently working on the subject of the work. He is scanning works written about Mimar Sinan, trying to get into the language of that period. There are certain sections that I would like to have on the stage in particular. We will form a framework. I think the composition process will begin after January. This will not be a biography of Mimar Sinan. A few sections about Mimar Sinan will be put on stage at the same time. It will be a work that will makes an impact on opera.”
Last Update: Dec 20, 2019 1:26 am
RELATED TOPICS