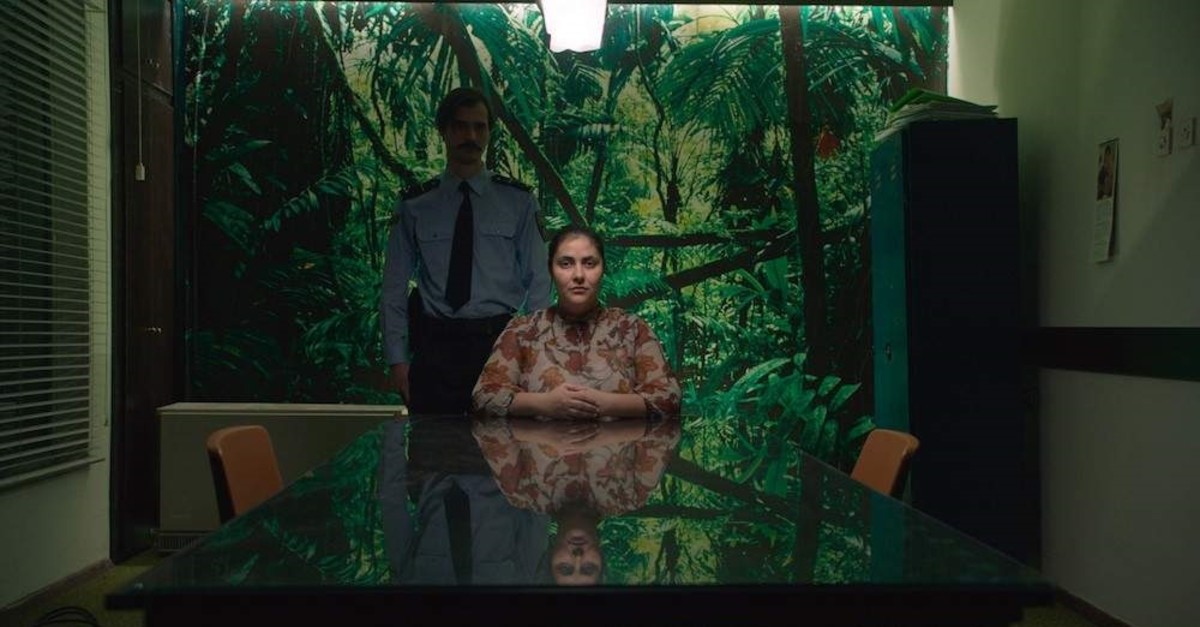 Zorica Nusheva as Petrunya, in scene at the police station.
by İREM YAŞAR Nov 15, 2019 5:54 pm
“Tell them you are 24,” Petrunya’s mother tells her when she goes to a job interview. However, she is 32 years old and a history graduate, both of which make it more difficult to get the job.
It is the opening scene of Macedonian drama “Gospod postoi, imeto I’ e Petrunija” (“God Exists, Her Name is Petrunya”), directed by Teona Strugar Mitevska. The production, which was in the running for a Golden Bear at the 69th Berlin International Film Festival, revolves around the story of a woman from the Macedonian town Stip who struggles to fit in to society from all aspects.
Petrunya, played by Zorica Nusheva, has no job experience except waitressing. She is a post-graduate, but it seems that she has studied a subject that no one needs. On top of it, her mother always nags at her to find a proper job. The movie shows the audience how she is marginalized even by her mother due to her idiosyncratic personality. Indeed, all she wants is to be herself, get a job according to her competence and not to be judged because of her weight. Like all conservative, patriarchal societies, the play shows that this is far from easy in modern Macedonia.
The main event of the movie surrounds the Epiphany religious feast celebrated in Macedonia. As part of the ceremony, a cross is thrown into a river for young divers to try to catch for good luck and prosperity. In 2014, a female contestant grabbed the cross in Stip in real life, leading to police getting involved to retrieve it from the winner. Inspired by this event, the movie shows Petrunya as the quickest cross-grabber in a move questioning the expectations of gender faced in the country.
“Gospod postoi, imeto I’ e Petrunija” is a feminist critique of a patriarchal society, but some critics say it raises more questions than it answers. This may simply be down to the fact of the myriad social issues the film addresses beyond patriarchy. For example, the audience is at no point informed about Petrunya’s attitude toward religion or society, just that she differs from others and is disturbed by certain rules or behavior. However, some scenes hint at these ideas fleetingly before disappearing into a cloud of ambiguity.
In fact, the film provides no alternative solution for patriarchal society. Despite all the oppression Petrunya faces, she does not accept giving her cross back, staking her claim on what she has worked for in resistance against the system. In the end, her insistence pays off and she is released to deliver the cross to the priest personally. Although she surely gets what she wants within the narrative of the film, this however, fails to present a way beyond her social order.
This is probably intentional on the part of the director, who merely seeks to reveal the problematics at hand in the most clear cut way. Nevertheless, it would be more satisfying to suggest a solution from an alternative perspective after having reflected so many of the bleeding wounds suffered across the country. One could argue that allowing open-ended questions to remain is taking the easy way out, after all.
However, I have to compliment the director in terms of cinematography. The colors and shots are so natural that you feel like you are actually in a Macedonian town. Also, the transitions in the footage support the naturalness, making it easier to follow. Nusheva’s careless, free acting is another strong supporting element. It is certain from what we see onscreen that she has a flair for portraying such a rakish character.
In sum, “Gospod postoi, imeto I’ e Petrunija” is a movie that captures an interesting and exciting issue, despite sparking a desire for further elaboration. Nonetheless, this is a feature well worth seeing for its lead character and consistent visual effects.
Last Update: Dec 20, 2019 1:42 am
RELATED TOPICS