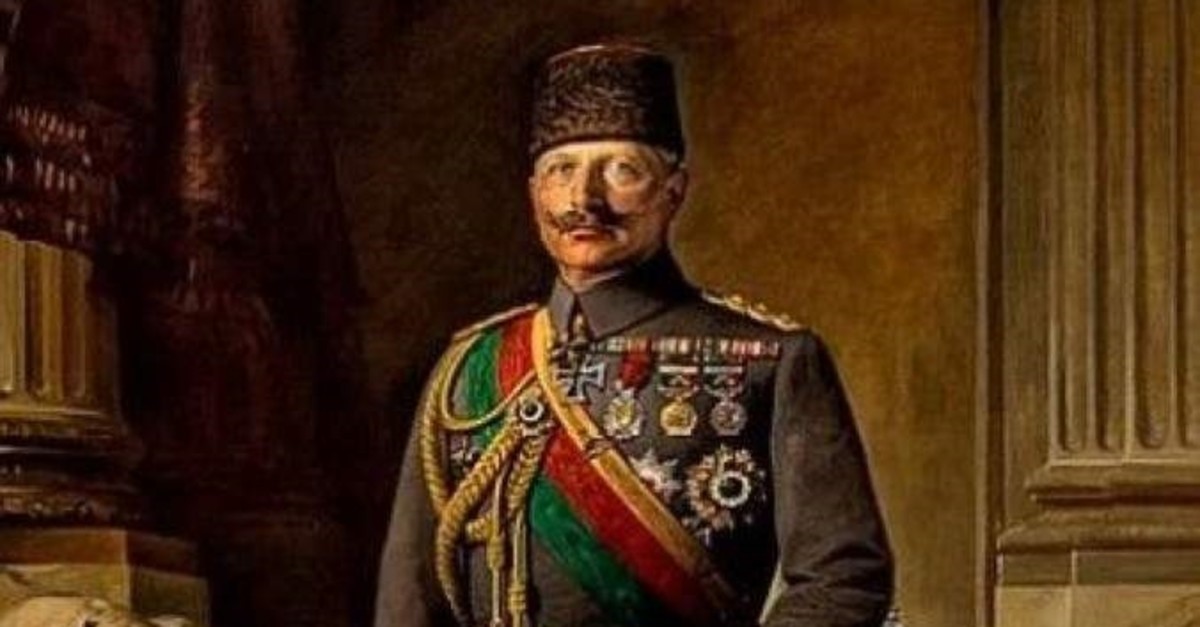 The painting was hung in the Wilhelm II hall of the Consulate General of Germany in Istanbul in the early 1980s.
by Daily Sabah Nov 17, 2019 7:22 pm
The painting of Wilhelm II, painted by German painter Max Fleck for Sultan Reşad, became ignored after the sultan was dethroned and the German Emperor was exiled. The painting has been waiting for its owner for a century now. The painting at the Consulate General of Germany in Gümüşsuyu in Istanbul, showing the last German Emperor Wilhelm II in the uniform of Ottoman Field Marshal, has been searching for its owner for 101 years.
The painting, painted by Fleck to be presented to Ottoman Sultan Mehmed V, known as Sultan Reşad, became derelict due to transportation difficulties in war conditions and reached Istanbul only after the sultan was dethroned and Wilhelm II was exiled. The mysterious painting, drawn as a symbol of Turkish-German friendship, has been neither sent to Germany nor delivered to Turkey for a century.
The unknown story of the oil painting of the last German Emperor Wilhelm II, which has been in the Consulate General of Germany in Istanbul, for years, dates back a century.
The close political relations established between the Ottoman Empire and the German Empire before World War I turned into an alliance during the war. The German Emperor Wilhelm II, seeking to win the love of the Turkish people and the Ottoman palace during the war years, decided to visit Istanbul again in 1917, where he had come twice before.
Summoning Prussian royal painter Max Fleck before his visit, Wilhelm II asked him to make an oil painting of himself in Ottoman marshal uniforms to be presented as a gift. Wilhelm II set out before the painting was completed and his visit to Istanbul was challenging during the hard days of World War I. The emperor had to travel by train as the maritime route was dominated by the British Navy. The German delegation decided to send the painting in the marshal uniform by train after the final touches and to offer it to the Ottoman sultan in the last days of the visit. However, due to long-term rail transport through the Balkans, the painting reached Istanbul in late 1918. Meanwhile, Sultan Mehmed Reşat V was deposed, the central powers lost the war, and Wilhelm II was exiled to the Netherlands. So, the unattended painting was removed to the German Consulate in Gümüşsuyu for presentation.
According to Viron Vert, a painter who is working on the painting that has been looking for its owner for a century, when the German Empire collapsed and the Ottoman sultan was dethroned, the painting of Wilhelm II in the marshal's uniform remained derelict. Pointing out that German authorities were in a dilemma about what to do with the painting, Vert stated that the embassy sent the painting back to Germany after a while. However, the painting that reached Berlin was sent back to Istanbul by the German Foreign Ministry saying “We are not its owners.” This time, the embassy lifted the painting to the warehouse saying “just in case.” The painting, which stayed in the attic for years, was hung in the Wilhelm II hall of the consulate in the early 1980s. A few years ago, the authorities of the German National Museum asked that the painting be sent to Germany for exhibition, but the Legal Counsel of the German Foreign Ministry responded negatively to the request. They said that the painting should remain in Istanbul and the actual owner of the painting prepared to be given as a gift is not clear. “As you see, the painting of Wilhelm II is stateless for 101 years,” Vert added.
Last Update: Dec 20, 2019 1:45 am
RELATED TOPICS