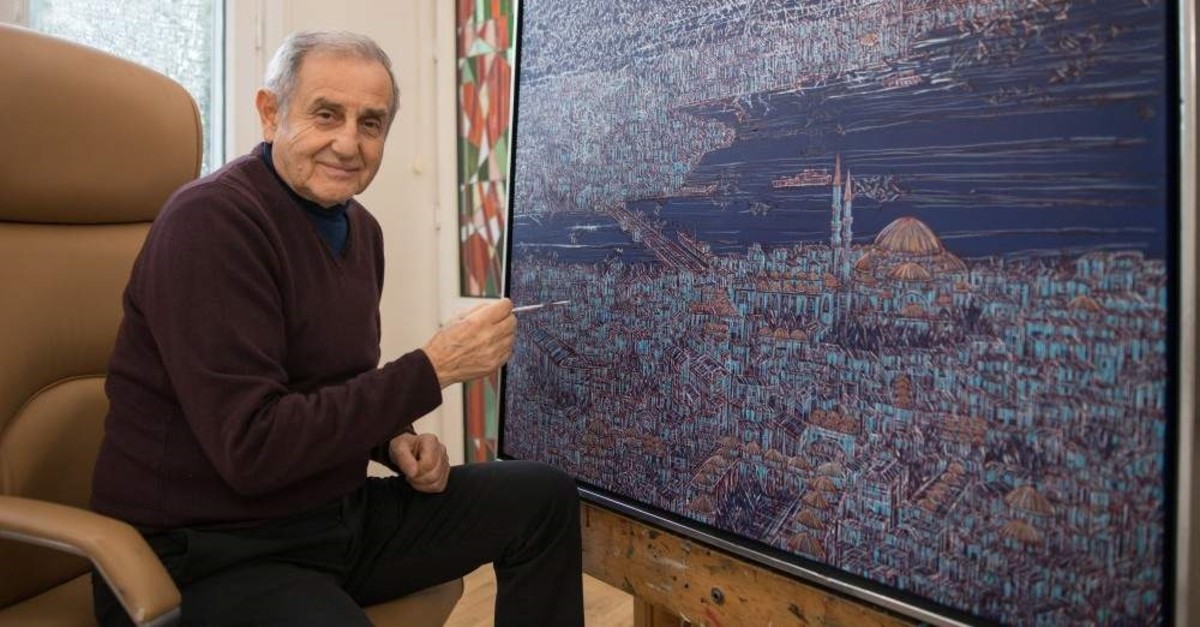 Devrim Erbil is the winner of the painting award. PHOTO BY SAFFET AZAK
by Daily Sabah Dec 19, 2019 6:11 pm
Each year, the Presidency of the Republic of Turkey presents the Presidential Culture and Arts Grand Awards, held in honor of citizens who have produced work that contributes to the country's cultural and artistic heritage for future generations, and have prepared the ground for the rise of culture and arts across the world.
The Presidential Culture and Art Policy Board has made their decision on award-winners following a rigorous evaluation of candidates celebrated for having created unique, skillful and aesthetic works that will provide a beckon of inspiration for others in the arts. The winners are set to be presented with their awards at the presidential office.
This year, Nuri Pakdil was deemed worthy of the Presidential Culture and Arts Grand Awards for literature posthumously, thanks to his unique works, which are filled with keen ideas regarding the sovereignty of native thought, written using a literary style which has seen the adding of countless terms to Turkish literature. A renowned Turkish intellectual and author, Pakdil, wrote over 40 books over the course of his life. A gifted poet as well as author, for Pakdil, the distinction marks just the latest of many prizes. Pakdil defined himself as an Islamist and a revolutionist, with a motto which holds: "I stand by the religion that stands by labor and freedom." He passed away at the age of 85 in the capital Ankara on Oct. 18, 2019.
MFÖ, the legendary Turkish pop band named after the first initials of group members Mazhar Alanson, Fuat Güner and Özkan Uğur, will also be presented with an award for their contributions to the development of Turkish music, as well as the dedication they have shown to their craft over the course of a career spanning more than four decades. The group is well celebrated across Turkey and beyond, and noted for their vocal harmonies and distinctive style. The trio, whose history dates back to the mid-60s, still charms fans, showing no signs of reducing their year-round series of live performances.
Mesut Uçakan, meanwhile, is set to receive an award for his lifelong contribution to showcasing national and local identity in Turkish cinema, with an impressive filmography now recognized by the Presidential Culture and Arts Grand Awards ceremony. A director, screenwriter and producer, Uçakan has directed a number of big screen and TV hits.
Devrim Erbil will receive the painting award for having introduced a fresh approach to Turkish arts and incorporating cultural traditions into his abstract works and landscapes. One of the most important figures of contemporary Turkish art, Devrim Erbil has devoted 60 years of his life to the art of painting by creating a unique style with his intense use of sketch-like lines and colors to draw bird’s eye Istanbul panoramas.
Fellow artist Fuat Başar will receive the traditional arts award for his outstanding work in vivifying the art of calligraphy and marbling, allowing these traditional art forms to be handed down to new generations. Başar has represented work at over 350 solo and group exhibitions and has even succeeded in popularizing the art of marbling in many countries, including the U.S., Germany, Japan and Malaysia.
Doğan Kuban will be awarded for his theoretical and conceptual studies on the history of Turkish architecture, restoration activities, his views emphasizing Turkish contributions to Islamic architecture and various books on these subjects. The architectural historian has over 70 books to his name focusing on Turkish, Islamic and Anatolian architecture.
Fellow professor Ahmet Yaşar Ocak has been deemed worthy of an award in social sciences for his contributions to history and cultural historiography and for his academic studies that explore the social history of sufi communities, famous figures and holy places. He is an honorary member of the Turkish Historical Society and the Turkish Academy of Sciences.
Finally, the presidency's loyalty award is set to be received posthumously by the late deputy culture and tourism minister, A. Haluk Dursun, in honor of his tireless efforts to preserve Turkey's most valuable historical sites for future generations and to keep the spirit of Anatolian, not to mention Ottoman, unity alive. The long-time professor was appointed deputy minister last year, having served in the ministry between 2014 and 2016. Dursun will be remembered by many for the major renovation works he embarked on at landmarks such as the Hagia Sophia and Topkapı Palace. He passed away in a traffic accident in August this year.
Last Update: Dec 20, 2019 1:57 am
RELATED TOPICS