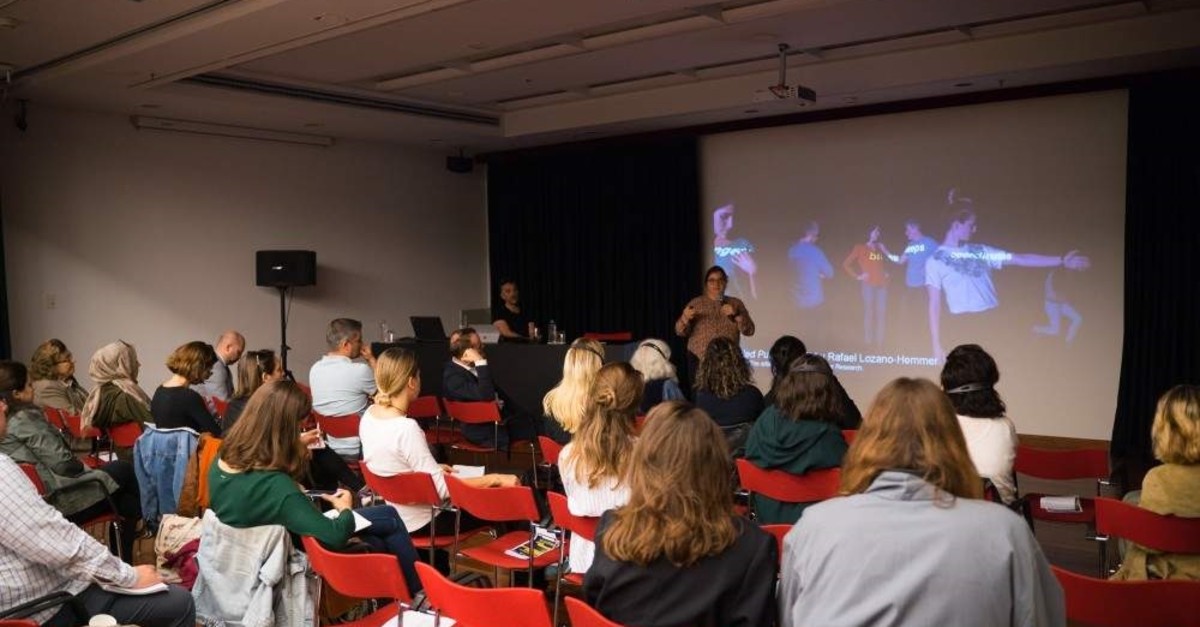 A photo from the speech of Patricia Falcao in November.
by Daily Sabah Dec 01, 2019 4:00 pm
A discussion on the concept of a digital art museum in Turkey is underway. The project, entitled “Protection of Technological Art Works” has been launched in cooperation with digitalSSM, the archive and research area of Sabancı University Sakıp Sabancı Museum and Sabancı University. The first of the panel series was held on Nov. 15 and attended by experts and academics from Turkey and across the world to address the issue of how to move new media such as digital media, video, interactive art, computer graphics and animations into the future in the midst of rapid technological transformations.
Selçuk Artut of Sabancı University's Visual Arts and Visual Communication Design Department delivered the keynote speech, paving the way for talks by Cemal Yılmaz, Professor of Computer Science and Engineering at Sabancı University, and internationally recognized authorities such as the TATE's Patricia Falcao and Dragan Espenschied, Rhizome's Conservator Director as speakers. The event also included a workshop on “Time Based Media Conservation.”
Speaking on the project, Sakıp Sabancı Museum Director Nazan Ölçer said: “These days, with digital art constituting such a pressing issue, it is very important that the preservation and transfer of these works to the future is being discussed in our museum for the first time in Turkey. Because software and hardware systems are becoming outdated, works of digital art are shorter-lived than art products in other fields, and software renewal can sometimes cost higher than the value of the original, leading to the possible loss of the works. I believe that this series of talks carried out in our museum sets an important threshold for the transfer of these works, which are now considered as digital heritage, into the future.”
As part of the Protection of Technological Art Works project, the next series of talks, to be held at 2 p.m. on Dec. 13, a keynote speech will be delivered by professor Siegfried Zielinski from Michel Foucault Chair at the European Graduate School’s Media Archeology and Tecno-Culture Department. The talk will be “Archeologies in the future: Travel from the deep traces of time in the media to possible futures.” Here, experts from the ZKM (Center for Art and Media Karlsruhe) and PAMAL Group (Preservation & Art - Media Archaeology Lab) will announce the findings of their research on Jeffrey Shaw’s Virtual Sculpture (1981), Paul Garrin’s Ghetto With Watchdog (1989-90) and Frank Gillette and Ira Schneider's Wipe Cycle (1972) in a speech entitled “Reconstruction of media and digital artworks in the context of media archaeology: Applied case studies.”
The final part of the project will be held on Jan. 17, 2020 under the title “Creating a collection of technological artworks, exhibiting and preserving works.” The panel will be attended by artists, conservationists, collection managers and curators from all over Turkey. Attendance to the conferences and workshops is free and language will be English with simultaneous translation into Turkish.
Last Update: Dec 20, 2019 2:03 am
RELATED TOPICS